UP Art Studio, the Houston design house and art consultancy firm responsible for the popular “mini murals” program which places Houston artists’ work onto traffic cabinets/electrical boxes, has reported more than 17,000 visitors to its new mural site in the first week following the launch of its new web-based mural map. The site, which is currently maintained by UP Arts studio founders Elia and Noah Quiles, was made possible by a $2,500 Houston Arts Alliance grant earlier this year, and is constantly being updated. At launch, more than 750 pieces were listed with the site, and at the time of this writing, the organization states that number is approaching 1,000.

Murals listed on houstonmuralmap.com feature descriptive information whenever available, including title, neighborhood, status of the work’s condition, the provider of photographic documentation, and links to the artist of the work. Visitors to the site can also sort murals by artist or community area. At the bottom of each mural listing on the platform is a contact form which allows for comments and corrections from the public, or anyone who may be familiar with the specifics of the work featured.

Elia Quiles, co-founder at UP Art Studio, hatched the concept for an online tool to report and map murals in the city of Houston after working as the lead consultant on a placemaking project for a client in Houston’s Montrose district. After discussing it with UP Art Studio’s web developer, Alex Barber, the group decided that they could build it on the same system that’s used for the Mini Mural website program.

In order to map the hundreds of public artworks in the city, the firm decided to take an approach that allows for ‘crowdsourced’ input from anyone familiar with the murals of Houston. Quiles stated that the grant money only paid to set up the platform, and doesn’t account for the labor hours required to document, photograph, and upload each public artwork to the site. She describes the time the firm spends updating the project as ‘volunteer hours,’ but says that additional suggestions by users are routinely made to the site by their small team.

Including comments and suggestions from the general public, UP Art Studio has also partnered formally with several organizations and management districts, such as the City of Baytown and Midtown Management District, to ensure murals within their jurisdictions are included on the platform. Quiles also mentions mural hunters — such as @colors_on_hou, @houstonmuralspot, and El Muralcho, listed on the site’s Partners page — whom she reached out to directly after seeing their presence on Instagram. Individually, the mural hunters have helped locate and provide images to the site.

The launch of Houston Mural Map comes after the success of the firm’s Mini Murals, a public art project with municipal and neighborhood support that was founded in 2016 and later expanded to Austin in 2018 with a contract from the City to make traffic cabinets available for beautification by local artists.

Please go here for the map. 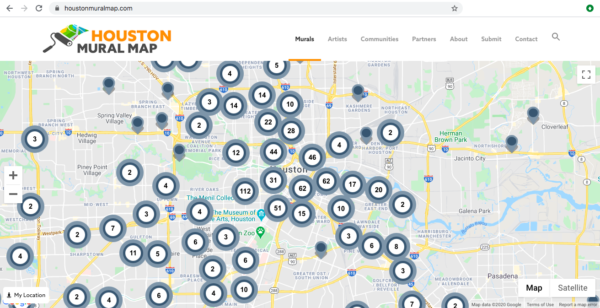 A geographic overview of mural locations in Houston via houstonmuralmap.com 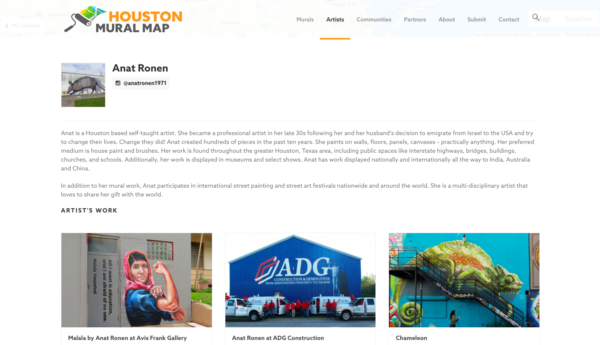 An example of an artist’s profile on houstonmuralmap.com

This is great! I am teaching a murals class this semester and will pass this on to the students! Thank you!

I looked at it before, and was frustrated because actual wall murals are not differentiated from the smaller painted (electrical, etc.) boxes. If I wanted to do a drive around tour of wall murals, it would take me weeks to separate them out! All it would take is a different color or indicator on the map to tell the difference. It’s a great idea and a major accomplishment, but I didn’t have the patience to use it for the research I wanted. Today I couldn’t reach the map at all.