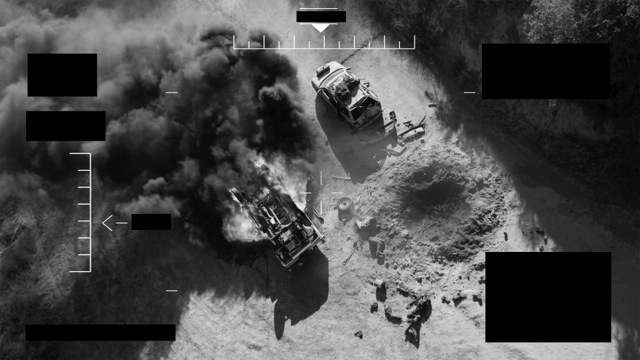 5000 Feet is the Best, on view at the Dallas Museum of Art, is a film based on two conversations that artist Omer Fast conducted in the fall of 2010 with a former Predator Drone aerial vehicle operator-turned Las Vegas casino security guard. The interviews are the seedbed from which Fast has pulled themes of remote warfare and the psychological effects of it on the Drone pilot, suggesting the implications of these things on current culture at large. Fast’s film sutures together reality and fiction and deflects any pat or partisan readings. 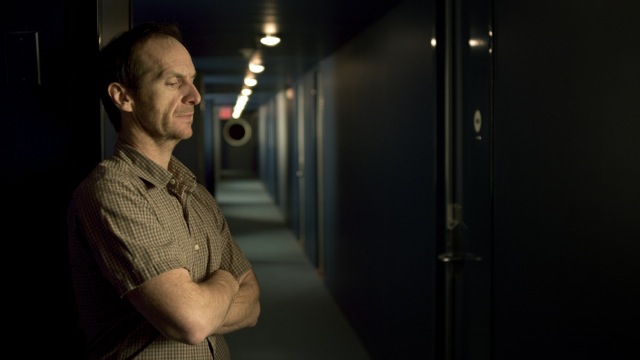 Rather than take up the torch of so many post-9/11 documentaries and simply convey the facts of a soldier’s particular witnessing of the war in the Middle East, Fast has handled the pilot’s information imaginatively, turning instead to the traditions of ancient epics and scared texts where stories are framed within stories—the Iliad, the Bible, Arabian Nights—using the power of storytelling to convey a deeper subtext and enrich the pilot’s recollections.

With the pilot’s information in mind, Fast has constructed three dramatized sequences in the film, each beginning the same way, with the pilot (an actor) sitting on a hotel bed facing his interrogator, presumably Fast himself, who asks: “So, what is the difference between you and someone actually in an airplane?” to which the pilot answers, “Nothing…” and then, after accusing the interviewer of leading him to speak about the history of remote warfare, in each sequence he falls into telling a seemingly unrelated story, which we watch unfold on screen. 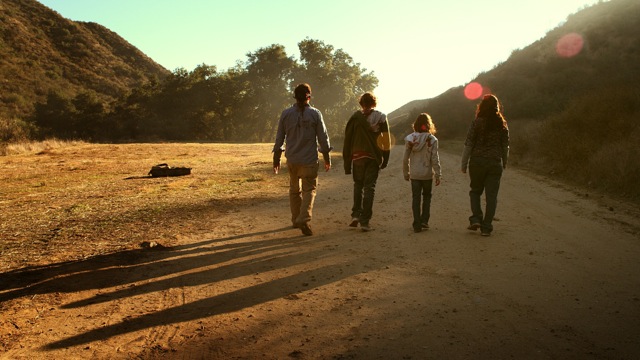 The first story is about a man who poses as a train operator without getting caught.  After a lifetime of obsessing over trains, he runs the train smoothly and on-time for an entire day, only to be arrested later that night for breaking into his own apartment after losing his keys during his illegal adventure. The second tale is about a couple who robs casino patrons through a seduction that involves stealing pants. The third one tells of a family who abandon their home to avoid some unknown trouble. They hit the road, only to encounter a bevy of trials along it.

Fast’s fictional pilot in 5000 Feet is Best is using parables to diffuse the severity of his experiences while still conveying their import. His off-topic tales have everything to do with his own experiences and the wider issues at hand, though his interviewer never understands the purpose of the pilot’s ramblings. The interviewer asks about the train-stealing character “Was the man in this story someone in your unit?” and the pilot curtly answers “No, it’s a metaphor.” That dramatized lack of perception on the part of Fast is meant to suggest an endemic lack of imagination, and therefore understanding, about the effects of war on a soldier by the pilot’s audience, namely, I think, the American public. What Fast’s fictional pilot actually does is set up a series of scenarios in his stories that could be prefaced, each time, with “War is like…” a man that steals a train, a thieving pant-stealer seductress, a family innocently slain. Though the dramatized pilot never goes into factual details about his experiences as a Drone pilot, through his stories we begin to build a very clear picture of his relationship with his memories and the safeguards he has made for himself in dealing with them. 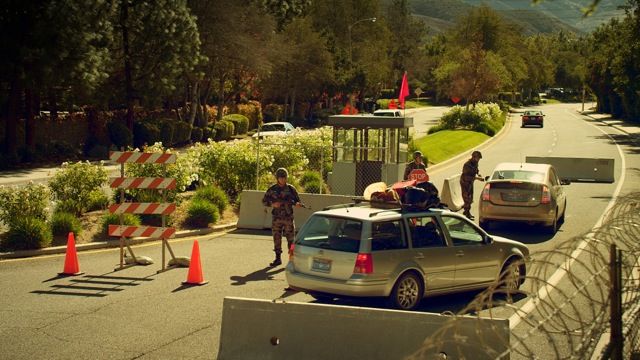 These fictional sequences are interspersed with actual audio of the real Drone operator laid over aerial scenes of pastoral or suburban landscapes, as if shot through the camera of a Drone aircraft. Through all of this gentle yet powerful reworking of the actual Drone operator’s commentary, Fast has shaped a virtual world, rife with global fears of terrorism and social unrest, and full of images that point in multiple meaningful directions. What does it mean, for example, that the fleeing family in one of the stories is depicted as American, headed down roads with security checkpoints that are manned by the “occupying forces,” which are here depicted as the Chinese? The framework of this tale by the pilot is one we associate with war stories from countries split through with fighting, so to follow the story through the American landscape with typical folks in a VW station wagon, is jarring and unnerving. It infects the viewer with a sudden, deep insecurity. Through it, Fast suggests, quite effectively, that we take our security for granted while at the same time he conveys the perilous existence of civilians in war-torn countries.

The most powerful thrust of Fast’s brilliant film is the notion that war is always personal, no matter the distance between the killer and the killed. When I was speaking about the film with my parents, both liberal arts professors, my mom recalled a scene in Book VI of the Iliad in which two enemy soldiers meet on the battlefield, recognize each other, and fall into a long-winded genealogical conversation that draws out their ties to one another. Later, via email, my dad said:  “… the point in the Iliad is that all deaths are personal, pretty much face-to-face, and often a matter of knowing your enemy by name—much more like sports now, except that the winner kills the loser. The only kind of relative anonymity [in the Iliad] comes with using the bow, which is considered a coward’s weapon because you ‘strike from afar.’ That’s more the parallel to the drone pilot, I suspect: killing others without risking yourself. Even there, though, it’s a matter of seeing and aiming.”

That “seeing and aiming” that the drone pilot must do is the meat of his recorded comments to Fast. He speaks at length about the details he could see on his targets, even at a height of 5000 feet—the kind of shoes a person was wearing, if they were smoking a cigarette, their posture. Indeed, despite the distance between him and his targets, the pilot struggles to convey his own war wounds in light of witnessing the personalities of the people he killed. In the hands of Fast, those wounds are sympathetically and poetically acknowledged, while he sketches out the mechanics of a wider world’s illness with a searing, subtle clarity.

Lucia Simek is an artist and writer based in Dallas. She and her husband, Peter Simek, founded the much-loved, short-lived arts and culture site Renegade Bus in 2009. She has also written for THE Magazine and People Newspapers, and is currently a frequent contributor to D Magazine‘s arts blog, FrontRow. She also acts as the arts commentator for the kids blog Tiny Dallas.