Between the Worlds at Artpace 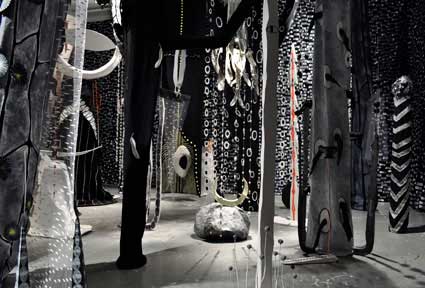 Walking into Matthew Ronay’s dense, dark “Between the Worlds” installation is like stumbling into an Edward Gorey black-and-white fairy tale forest. Mysterious striped owls sit in the bleak limbs of creepy trees. Toadstools grow on the logs, and traces of sea life can be found. Creations with gourds, beads, shells and other decorations form primitive altars. In the corner, a caped, crescent-wearing shaman/wizard figure (which Ronay occupied during the opening) appears to be casting a spell. White dashes on the painted walls form rippling, cosmic wallpaper that makes it appear as if everything is spinning through space.

With mysterious seeing eyes peering at you from every hiding place in the artist’s fantastical forest primeval, “Between the Worlds” is on view through Jan. 2 at Artpace. The New York-artist says the low-key color scheme is partly the result of being color blind.

“I used to pick colors semiotically,” Ronay says. “My earlier work had much brighter colors, but there’s been a huge shift in my work. I want to use a more natural palette. There are a lot of colors in nature, but they are used sparingly. In the forest, you won’t find a lot of bright colors.”

Joseph Campbell’s interpretations of mythology have propelled Ronay on a quest to explore deeper meanings in his work, drawing from non-Western forms. He’s abandoned the conceptual cynicism of his earlier work to explore more spontaneous, evocative imagery boiling up from his subconscious. “Between the Worlds,” however, is rooted in medieval mythology, especially stories of brave knight entering the forest to hunt and kill a dragon.

“There’s beauty and danger in the forest,” Ronay says, “I think the things I have come up with aren’t explicable and they’re not overdeveloped. I’ve read a lot about psychology but I’m not interested in an institutional approach; I’m being more intuitive. I came up with a central narrative, but also a lot of nonsense and non-sequiturs to go with it.” 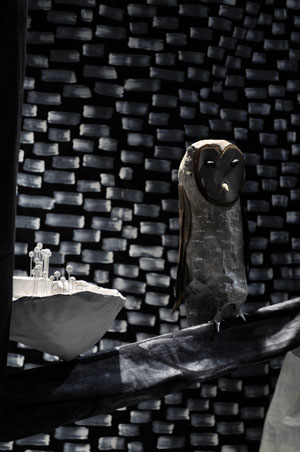 In the story of the Arthurian knights, according to Campbell, each knight was sent out in search of the Holy Grail, a spiritual rather than a material goal, by “entering the forest at its darkest part,” that is, at a place where no one has cut a path before. There are no clear paths running through Ronay’s crowded forest, where you have to tiptoe around. But there are startling, inexplicable images, such as the double owls — a “ghost” owl appears to be emerging over the “real” owl.

“There’s an ocean full of imagery out there, and I’m just trying to draw on what has meaning to me,” Ronay says. “I’m not making any social or political critiques in this work. I sketched a lot of my ideas very quickly as the images came to me.”

But Ronay does see some magic in the work of the artist, symbolized by the shaman figure.

“He is whatever he is, an artist/shaman figure,” Ronay says. “But I am interested in transformation. In Eastern cultures, there’s a belief that you can transfer energy to objects through repetitive actions. All of the beads I used are turned by hand.”

By making each piece individually by hand, Ronay feels he can infuse each piece with his energy, perhaps giving them magical qualities.  His new-found interest in handmade objects contrasts sharply with his earlier, cartoonish objects made with machine-tooled medium density fiberboard (MDF).

“This project has a lot of things in play,” Ronay says. “But in reading Campbell, Jung and others, I was wondering about the thread that runs through all religions. What makes you who you are? ‘Between the Worlds’ is more of a spatial dream. It feels like the culmination of what I’ve been working toward. You can find all kinds of metaphors in the forest.”

As if to underscore Ronay’s forest metaphors in the upstairs Hudson (Show)Room, Leonardo Drew has created a spectacular found-objects-and-organic-matter tree stump with roots sprawling out in a twisted tangle for Artpace’s front window.