DISCLAIMER: This has been carefully edited by Sean. 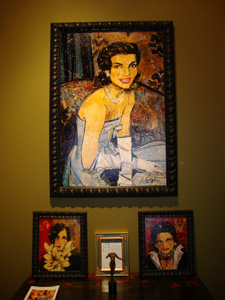 Who is Kathy Womack you might ask? A very popular artist/social activist based out of Austin, Kathy champions the cause of a small, isolated, and incognizant sub-species of homo sapiens sapiens known as Deciduous Copiosus, or as you may recognize them, The Idle Rich.  Recently, this often persecuted and vilified group suffered a number of setbacks, and was threatened with near extinction.  Thanks to the efforts of Kathy, the rising numbers of uninsured poor, and the government bailouts set in motion by the George W. Bush administration, Desidiosus Copiosi once again stands on humus inconcussus.

Before I take you on a tour of Kathy’s work, prepare yourself for an emotionally flat roller coaster ride, somewhat akin to being in a Lexus LS460 set on cruise control driving down I75, outside of Dallas headed toward Plano .

Like many indigenous tribes stripped of their language, culture and lands, the Deciduous Copiosus often have alcohol problems.  For example, in one case a woman could not find the key to the wine cellar because her maid Conception had misplaced it, and in another, perhaps the saddest case yet, a woman could not decide between serving Latour Pauillac or the Haut Brion. 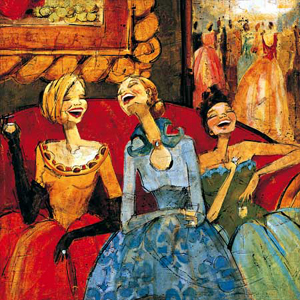 Says Kathy, “Unless you have been in these women’s shoes, which by the way are Jimmy Choo’s, you can not understand the pain they suffer each and every day.  Believe me, Choo’s are unnaturally tiny down at the toes. they really shouldn’t be worn, but if you knew the social pressures, you would realize these women have no choice!  This is no different than foot binding in that country where those people are also forced to have Blepharoplasty, so that they will look like us and be happier!  And by limited, I mean like in an inability to think imaginatively or independently, I try to be very clear on that point.”

Kathy is known for her charitable work.  Most notably, she has produced prints for the Susan B. Komen Foundation on behalf of women with breast cancer, as well as for the American Heart Association, Make A Wish Foundation, The Miracle Foundation and countless others.   A lesser known charitable gift resulted in two limited edition prints, Shop for The Cure and Shop for The Cure 2.   I sat down with Kathy and asked her to tell me the motivation behind this work. 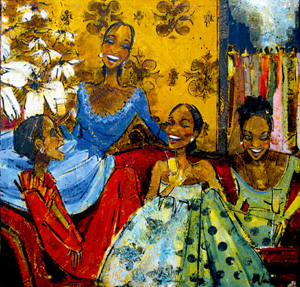 “ As a younger woman, I was a major, major fan of Robert Smith and The Cure, a major fan.  In August 2007, a group of my friends and I flew to Singapore to see them play live. My friends are a carefree bunch, they always like to smile and laugh, but even they were struck by the melancholic nature of the band, as the band grimaced and stomped across the stage in their sweaty, dirty black clothes.  And as you may or may not know, melancholia does not bode well when one has had an enormous amount of botox pumped into one’s forehead, for no matter how paralyzed one’s forehead may be, extreme states of melancholy will still cause one to frown, which in turn causes the skin to crinkle, and in many cases, pull so much, that the forehead is rendered in two.”

And on that very night, such was the case.  But we weren’t to be defeated. My friends and I are known as troopers, so while gathering the bits of our skin that flew around the stadium like so many burst balloons, we collectively decided not to give up on the band, but rather instead go shopping for them at Balenciaga.   For you and I both know that when you put on pretty new clothes, you feel good about yourself and you smile, although in the case of my friends that could be caused by the massive amounts of painkillers they ingest as well. “

I enjoyed my visit with Kathy, and I enjoyed sharing the exciting work of this artist with you, my dear readers.  When I left her, she was at it again, painting the work that will possibly make her the most successful artist of all time, Women and Wine: 1,253th Limited Edition, a heart rendering portrayal of three Asian women, dressed in ball gowns, sitting on a chaise lounge, laughing their asses off, drinking to mask the pain.

Kathy is my long time friend from Austin, we met before we both we were famous, I was trying to convince her to do a “Gay Men and Crystal Meth” series, but well, I might have to do it myself, lol

I feel in love with Kathy Womacks’ work a few years ago when one of my friends must have had at least 20 of her pieces of art.

I lost track of Kathy Womack so my husband and I drove to Austin, since her gallery here in Houston was closed. The gallery in Austin was closed also so I was desparate to find her art because I have so many pieces I have to have. Her art makes me happy and reminds me how important friends are. It is time for my Christmas pic so I am so excited to get a major piece for my collection. Thanks for sharing your work and I will keep up with you this time.