A Brief History of Time

Two seconds. The average length of time a spectator spends looking at a painting. A statistic that has received more than its share of reiteration, more than its fifteen minutes of fame. 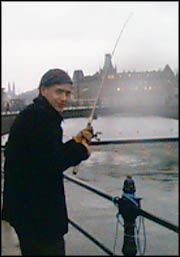 It was mentioned again by Lisa Corrin, moderator of the most recent ArtPace Dialogue, the panel-formatted after-talk that follows each set of exhibitions in the International Artist in Residence Program, which currently includes Berlin artist Christian Jankowski.

I don’t doubt that it is an accurate bit of data. I’ve heard it before, and just as it was this time, always coupled with the pronouncement that the artist has as his or her mission the extension of the viewer’s attention span. But this is hitching the pony to the backside of the cart.

Brought up along side this time worn cliché was another misguided, but broadly believed point of view: video is a time-based medium; painting is a timeless one.

Consider these concepts in tandem: If the viewer is standing before a painting and only views it for two seconds, it is still a timeless medium, but if the image is in motion and the viewer leaves, it remains a time-based medium.

And as a separate, but related issue, we must specify video’s demented uncle, television.

Some will say that it behooves the artist to enter the cultural fray with one medium set up as the polarity of the other, as if the painter is in combat with technology or in a struggle to gain its constituents, but all this is utter nonsense. I actually know people who watch "That 70’s Show" religiously. They might also give their attention to a video piece like John Smith and Graeme Miller’s Lost Sound, spend hours at the Bridget Riley show or pack their own lunch.

David Reed‘s Vertigo Bedroom, in which he successfully inserts his painting into a context provided by Hitchcock’s Vertigo, was duly noted by Ms. Corrin and is further evidence that not everyone believes that traditional and new media must always be aligned with mutually exclusive points of view.

Truth is, all mediums are time-based. Anything involving a human being is time-based. If the viewer has a heartbeat, he is based in time.

Here is a platitude worth restating: you get out of it what you put into it. don’t have time you say? Wrong. That is all you have.

If you check your defensive driving manual, you will find that two seconds is also the time suggested for complete compliance with the demands of a stop sign, and while you cannot consult a guide book for art viewing, you can stop, look and even listen to a painting. You can enter that space. You can relax there. You can have a drink.

But, the argument goes, the “time-based” medium allows for passivity in the viewer that painting resists.

I disagree. What this is really about is the quality of viewing. It is true that a painting doesn’t require you to sit through a specified duration or turn each of its pages, but see if you can get this — require yourself.

I submit that the good artist has already done his job. That it is the viewer’s responsibility that bears scrutiny; that the two-second people out there are likely just as inattentive in other contexts. That the artist’s mission is not to fix them, but to offer something that the viewer can ignore, but at his own peril.

I recommend that you watch Jankowski’s video The Holy Artwork at ArtPace through September 9th. Watch it more than once. You will probably forget how long it takes. 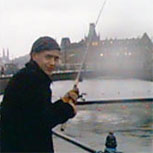