Drop “Krazy Kat” creator George Herriman into America at the dawn of this 21st century and he’d marvel at the prevalence of comic book imagery that surrounds him. You can’t open your eyes without coming across a comic artist’s work in advertising, on the covers of national magazines, in bookstores, in movies, on television, and, perhaps most surprisingly, in art galleries and museums.

Sure, Keith Haring and Jean-Michel Basquiat transformed the vocabulary of comics into a personal signature, and contemporary painters like Inka Essenhigh and Christian Schumann have used comic-based forms in their compositions, but more and more comics are becoming an original inspiration themselves, not simply a style.

Though Forty Days and Forty Nights, Marfa artist Michael Roch’s solo show at Dallas’ Conduit Gallery, takes as its cue the Biblical saga of Noah’s Ark, its approach is entirely 20th-century comics. For each of the 13 works gathered here — some sculpture, others pigmented joint-compound canvases — Roch imagines a possible scene from the ark on which Noah and his kin gathered two of every species to repopulate the earth after the flood. And with Roch’s finer moments here, what he achieves is a wry twist on the narrative possibility of the one-panel comic, achieving this look in his paintings by using one, two, or at most three, colors against a canvas covered entirely in a different hue. 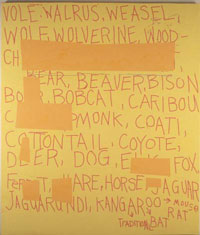 His more oblique moments, however, look more like incomplete thoughts. In Hall of Horns, a yellow line on a soft blue background traces the figure of a moose’s head, which almost floats inside a wood-paneled room. It looks as if it could be a hunter’s mounted trophy, until you recall that Noah probably wasn’t a taxidermist. Even more distracting are the text-based canvases like Clean Unclean — which lists names of animals in large print, some crossed out, others not — that don’t quite fit into the visual motifs Roch uses in the rest of the show.

he best images here — the boxing-gloved bear in This is a True Story, the Beatrix Potter nightmare Night Cemetery, and the mordant For Every Great Story There’s a Dead Horse — Roch balances the right combination of suggestion and drama, establishing a dialog between his works and their thematic allusions. In For Every Great Story There’s a Dead Horse, Roch economically captures a tense moment. Using a wavy green line against a pink background to suggest a turbulent sea, two sets of gray lines depict two horses deposed to different fates. One is seemingly sinking into the sea, its distressed head just above the water line; the other appears to be escaping that fate — all that is depicted is a set of hooves in the upper right quadrant of the canvas. It’s a composition that makes you wonder what the great story is here — is the horse being airlifted to safety? Or is it a more fantastic explanation, like this horse could fly?

Roch’s choice of palette for these images is a muted pastel, hues that only seem to exist in mail-order catalogs — seafoam, loden, cranberry, cappuccino, sunflower — and they heighten this removed-from-reality mood that Dead Horse exudes. In fact, Roch’s pastel palette pirouettes around the realm of accessible mythology and folklore and reaches for an even more otherworld plane, where the imagination rules and suspension of disbelief is more easily granted. It’s a realm that’s most frequently found in comic books. As such, it’s possible that Roch’s riff on his show’s inspiring source is to point out that Biblical stories such as that of Noah’s Ark are no more rooted in the reality of fact than those melodramas encountered on the colored newsprint on which Superman — or “Doonesbury,” for that matter — live out their imaginary existence for our amusement and escape. If so, Forty Days and Forty Nights is a bold show that doesn’t quite convince you of its goals, but you almost have to admire the conceptual ambition that Roch sets out to achieve.

All images appear courtesy the artist and Conduit Gallery.