“Artist and historian, Bernhardt Wall was a producer of fine press books who treated a vast array of subjects, including Texas and the Southwest. Today, Wall’s books are highly collectible and may be found in private collections, libraries and universities around the world. The etchings for this pictorial biography of Sam Houston were made in 1935 while wintering in La Porte, near the San Jacinto Battleground. Wall worked with Houston’s only surviving son, Andrew Jackson Houston, on the etchings. 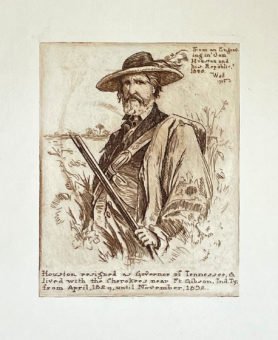 Sam Houston, born on March 2, 1793 in Virginia, was an American politician, soldier, and important leader of the Texas Revolution. Houston was elected as the governor of Tennessee in 1827, before settling in Texas in 1832. After the Battle of Gonzales, Houston helped organize Texas’s provisional government and was selected as the top-ranking official in the Texan Army. He led the Texan Army to victory at the Battle of San Jacinto, the decisive battle in Texas’s war for independence against Mexico. After the war, Houston won election in the 1836 Texas presidential election and served as the first president of the Republic of Texas. Houston played a key role in the annexation of Texas by the United States in 1845, and in 1846, he was elected to represent Texas in the United States Senate. In 1859, Houston won election as the governor of Texas, becoming the only American to be elected governor of two different states in the United States. In his role as Governor, he opposed secession and unsuccessfully sought to keep Texas out of the Confederate States of America. He was forced out of office in 1861 and died in 1863. Houston’s name has been honored in numerous ways, and he is the eponym of the city of Houston, the fourth most populous city in the United States.

Bernhardt Wall (1872-1956) was a pioneer etcher and producer of fine press books who treated a vast array of subjects, including Texas and the Southwest. Bernhardt Wall was unique in that he not only drew the etchings for his books, but he also printed and bound them. Wall began a career as a lithographic illustrator in 1889 working primarily as a commercial artist in New York and Buffalo. The year 1915 marked a defining point in Wall’s artistic career. Wall visited Colorado, Nevada and California making etchings of Indians, cowboys and major cities which were later published in a portfolio entitled, “Under Western Skies.” These proved to be very successful, and the artist shortly thereafter moved to California permanently. Wall continued to produce many fine etchings of the American West and by 1930 had also become a much-respected historian of the region. In the mid-1930s he produced at least three books of copper-plate engravings during annual Texas sojourns: Following General Sam Houston, 1793 – 1863 (1935), Following Stephen F. Austin, Father of Texas (1936) and Following Andrew Jackson (1937).”