500 Years of Art History: A Conversation with London Ham

London Ham, the former proprietor of Houston’s Blank Check Gallery, is an artist working in sculpture and synthetic reality. He spent part of the pandemic in San Francisco, where he worked at 500 Capp Street, an art space which occupies artist David Ireland’s former home, before beginning an online program in VR Development at New York University. He returned to Houston in 2021 to complete the program, and last November and December he mounted an exhibition of new work at Basket Books & Art.

I met up with him recently in Houston to discuss his new work and his thoughts on graphics technologies. 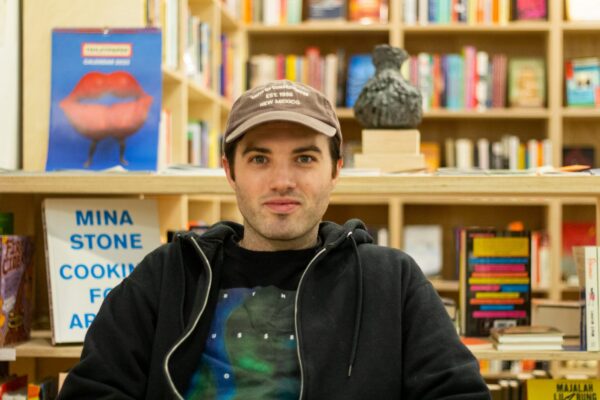 William Sarradet (WS): I recently saw your exhibition, Big Sur and the Oranges of Hieronymus Bosch, in Houston at Basket Books & Art. Seeing your work surrounded by literature and theory felt appropriate. I wanted to ask for your perspective on some concepts around art and technology.

London Ham (LH): I think that artists have always employed technology in their work, and that art keeps pace with and often precedes industry in certain ways. I believe that we have reached a point in cultural time where the technology we have developed to augment our vision is reaching levels of representation that begin to make it indistinguishable from natural reality.

I know that people also felt this way about Renaissance math-based representational techniques, and subsequently the radio, photography, the silent film, the color film, etc., at different points in history.

Technology cannot exist without art. Art develops methods for technology which supersede its commercial purpose. The ability and willingness to place oneself outside of the hierarchy of consumer capitalism allows an artist to use its products as raw materials… to fuse them together. To make them self-aware or self-effacing. To imbue them with a responsibility to recognize the production process that brought them to the artist’s studio, or to abstract them into unrecognizable fantasy. In this way they avoid their origins and become enmeshed as part of the surface in a larger composition.

By extending the application and function of commercial products/software programs, artists and very few others have the power to brute force industry into adapting and improving social conditions. Media/content/however you phrase it is the center of the attention economy. 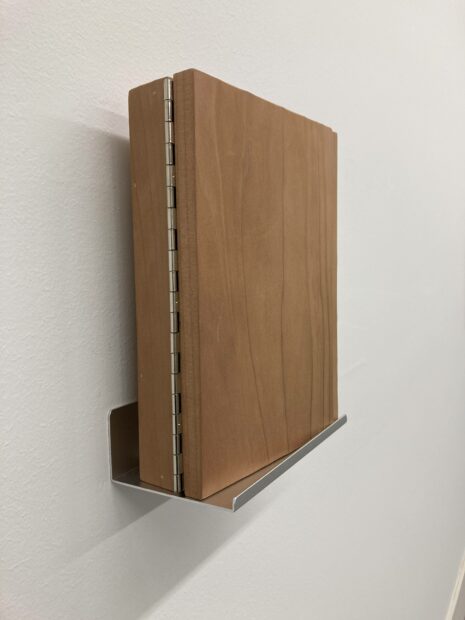 London Ham, installation view of “Big Sur and the Oranges of Hieronymus Bosch” at Basket Books & Art in Houston

WS: Your exhibition involved a room with several boxes containing Roland Barthes’ essay “S/Z,” and videos streaming inside an interactive virtual environment. Can you describe how you’ve arrived at your current work?

LH: I was working at The Menil Collection leading right up to the beginning of the pandemic, when I was encouraged to pursue an MFA degree by a colleague there. On my own during that period, I began working pretty heavily with 3D software as a tool to visualize some time-based works that needed to be simulated at a considerably more complex scale than anything I was familiar with. I would also read a lot of critical theory in my downtime while working the desk at Menil. A very close friend gifted me that book by Barthes. “S/Z,” along with a few others, became texts that would seed the next part of my journey as an artist.

I then moved to Los Angeles for the second time, into a home with several consistent collaborators from my previous time there. I was renting a computer from a VFX hardware studio in Burbank, and I began to integrate game engines into my workflow at a very slow pace.

I ultimately moved to the bay area, splitting my time between San Fransisco and Santa Cruz for several months, staying with friends in the city and living an austere but rewarding life on a farm commune in Pescadero, California.

I interviewed for an MFA at UC Santa Cruz and was placed on the waitlist, but ultimately did not receive an offer. I decided to remain, however, and continue my efforts at the farm. It was during this time that I became heavily involved in developing simulations for virtual and augmented reality using game engines, with a focus on exhibition making.

My time at 500 Capp and my experience with David Ireland’s work added a new spatial dimension to my perspective that really pushed this particular body of work forward.I shot video for a year on my phone, edited it in two weeks after returning to Houston, and began to build the environment for the exhibition virtually while enrolled in NYU’s online program.

I was thinking about what writing looks like in the form of a video, and how that could be experienced physically. The boxes are redwood, with piano hinges. I was very influenced by Robert Smithson’s “A Provisional Theory of Non Sites.” Each box contains a unique copy of Barthes “S/Z,” interlaced with a data set of text and imagery printed as photographs.

WS: What is the biggest challenge in building interactive virtual environments?

LH: In particular, I wanted to simulate the physical sensation of being in a virtual space without cords/wires/headsets (HMDs), so that meant a physical wireless controller that would have to be conceptually reflective of the qualities within the synthetic experience. This forms a hardware/software micro project within the larger concept. How are these things going to function? How can the results of their manipulation by the audience extend the immersive quality of the project? This was definitely the most interesting part for me, having to kind of constantly switch back and forth between the physical and digital. 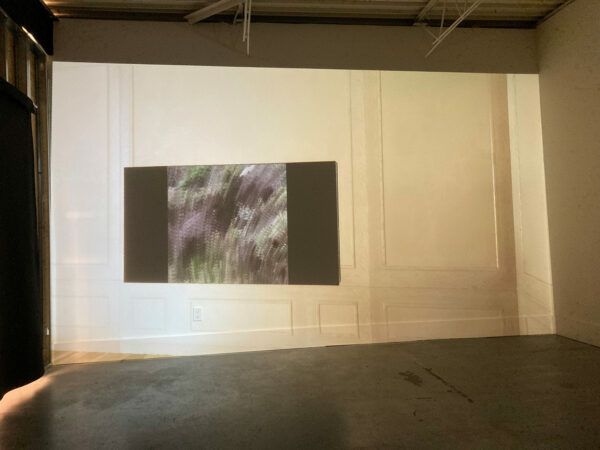 London Ham, installation view of “Big Sur and the Oranges of Hieronymus Bosch” at Basket Books & Art in Houston

WS: It sounds like you’ve developed a lot of related technical abilities in video and VR over the past two years. What stands out to you as something you’ve learned from it all?

LH: Ultimately the biggest lesson was that to simulate anything you need to have a solid understanding of how it would function in the natural world. It can be a fantasy object that doesn’t exist, but, in order to be believable, it needs to constrain to certain physical characteristics to establish a point of reference for how it could function. Materials, dimensions, light, kinaesthetics, etc. So, for me, it was really a convergence of all of these elements I previously considered opposing parts of my practice. Sculpture, cinema, painting, sound, performance — all of these things could suddenly live together, and that really gave me a sense of completeness with the work I have never felt before

WS: I’ve been using Sketchbook by Autodesk. Did you know Autodesk made a really well designed version of MS Paint?

LH: During a time when I worked in the Menil bookstore, the computer there had a program similar to this. It would allow you to draw in a 3D viewport with a handful of brushes, textures, and a color wheel. I remember it having an awesome user interface. I used it intermittently when the store was empty. Then, I moved back to the main building and it vanished from my consciousness.

WS: Are there any sleeper software products that you would recommend?

LH: Runway ML, which offers machine learning tools, is a truly amazing environment. I often sleep on it myself, unfortunately. I also find a lot of awesome small strange little tools anytime I work on a project involving software. GitHub is an amazing resource, even if you don’t consider yourself a coder.

WS: Have you ever seen Sam Rolfes’s digital paintings and puppetry?

LH: A close friend just sent me a work of theirs recently. I had forgotten the artist’s name, so this is awesome! It was a video with all of these VFX elements composited on top of one another that were losing their geometry in motion. It’s incredible work. This question just made me take an hour-long detour! I love that about our conversations, though.

The Blaffer Art Museum is getting ready to open a Jacolby Satterwhite exhibition, which I’m super excited about also. He and Marco Brambilla were two of my biggest inspirations early on when thinking about video as an object.

WS: I liked your take on the imminent outcomes of artificial intelligence as a means for generating visuals. You seem to think that it will be a net positive on artists’ overall generative output. Can you walk me through that a little bit?

LH: I do feel that AI tools are a major boon to creative impulse. Using Diffusion or style G.A.N. systems [image generation models built on machine learning technology] is like having a studio assistant that never sleeps and has 500 years of art history knowledge.

It allows the artist to think on different terms than we are used to within the creative process. For example, in my own practice, I can generate environmental textures really quickly now. Something that used to take me several hours now takes a matter of minutes, or less. I don’t throw that time away, but it allows me to focus on minutiae that I previously would have had to scrap for time constraints. Things like scratches in the floor textures or animating foliage.

As artists, we are constantly expanding our image base through direct perception (at the museum, in a film, something online). These images are stored in our subconscious, and I believe we conjure them in certain ways when we make our own work.

Stable Diffusion is a more direct line to that. Prompts are just unmanifested ideas for me, and bring me one step closer to what I want to see. In a way, they remind me of prayers. Although, to be sure, you still need a certain understanding of technical knowledge and imaging software jargon — or, at least it helps. If artists are interested but don’t know where to start, I highly recommend checking out YouTube videos on how to install Stable Diffusion locally on your PC or Mac. If the choice is there, always go open source.