The Preciousness of Truth: a Review of “The Butterfly Case by Bernardo Vallarino” at Love Texas Art

What is precious? When I think of art museums and galleries, I picture them as a home to precious objects. The challenge, however, is that we do not all have the same definition for what is precious. The Butterfly Case by Bernardo Vallarino at Love Texas Art provides ample opportunity for visitors to assess their own definition of the word. Infused with Catholic references, this exhibition spotlights the experiences of the marginalized, including immigrants, the unhoused, and cultural minorities, with befitting reverence.

Bernardo Vallarino, “Pinned Memory – The Truth May Be Hidden But Is Never Gone,” 2022, mixed media.

At the entry to the exhibition, visitors are greeted by Pinned Memory – The Truth May Be Hidden But Is Never Gone. This mixed media sculpture features a butterfly pinned into a white board, floating atop hundreds of additional T-pins. A tall, rounded vitrine protects and contains the display. Vallarino acknowledges that there is a macabre beauty to entomological displays like this. It is strangely fascinating that some still find butterflies visually appealing, even when viewing their lifeless carcasses splayed open and stabbed through by a pin. Admittedly, the pinned butterflies may make other visitors squeamish, but that also provides a provocative invitation. If you are repelled by the treatment of butterflies, how do you respond to the treatment of other human beings?

The butterfly serves as a stand-in for humans in Vallarino’s works. While butterflies often inspire thoughts of renewal and rebirth, he utilizes them to symbolize the moments leading to death; the acceptance and release that comes as it approaches. This is a theme he has previously explored in his series Between Dying and Death from 2008-2014, and Un-Human from 2015-2016. The pin through the butterfly — also featured in many others works in this exhibition— highlights the instances when this moment is brought about by others, especially due to systemic and socio-political factors. The title of the work sets out the premise of the show. Some hard truths may be swept under rugs to be kept neatly out of view, but the truths remain. It is up to us to decide if we wish to see them and address them.

Gastronomical Paradox, a series of shadow boxes featuring gold leafed butterflies on glass plates, provides a next step for visitors to reflect. For this body of work, Vallarino visited restaurants serving cuisines from around the globe. Each shadow box represents a specific country with a butterfly indigenous to that country. By scanning the QR codes on the labels, viewers can see the meal the artist had from each culture. Initially, Vallarino’s interest was in the ways food traditions preserve culture and resist appropriation. However, he was struck by the interactions of people in these restaurants. Patrons might be eager to experience a particular cuisine, but then would complain about the smells in the restaurant or critique the hygiene of those preparing their meal. In these restaurants, there’s an intimacy involved with sharing culturally significant dishes, many of which may require intensive preparation, or welcome guests into important customs. Yet many diners wish to consume these dishes on their terms and according to their expected norms and practices.

This lack of sincere appreciation for the labor over and the cultural context of the meals reflects the entitlement of those enjoying positions of racial and socio-economic power. With Gastronomical Paradox, Vallarino explores his own experiences in restaurants, some with cuisines that also pushed him from his comfort zone, illustrating intercultural dynamics that are, at times, laden with prejudice. He models a mindset of introspection, which he also encourages from visitors. What do we value about other cultures? Is there an incongruence in our appreciation of other cultures? While many of us love to enjoy the foods of other cultures, that embrace does not always extend to the people and their customs. This is the paradox Vallarino is investigating.

Beyond the dynamics found within restaurants, much could be said about a paradoxical relationship to the migrants that sustain our overall food system. From agricultural and meat production to food marts and restaurants, the labor of migrants is regularly exploited, without much regard from the average consumer. Those that are critical of allowing migrants into this country fail to acknowledge the many ways they help put food on our tables. Further, another project could delve deeply into the extractive practices of the United States and other Western powers in many of the countries referenced in this work. We seek the resources of these lands, but denigrate and deny the wisdom of those that cultivate those resources.

The exhibition is laid out in a way that shows a progression towards systemic violence and genocide. It starts with internal bias and prejudice — also the titles of two works in the show — ideas that lead to discrimination and violence against others when shared on a larger societal level. 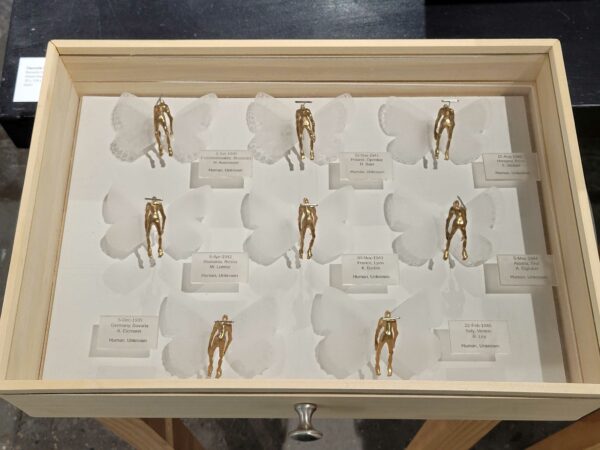 As visitors move further into the exhibition, the stakes rise. Vallarino explores the darker ways in which bias and prejudice manifest. A poignant example of this is Genocide Samples. Here, the symbol of the butterfly as stand-in for humanity is made overt, with metal humanoid figures attached to translucent wings. Similar to an entomological display, the humanoid butterflies are contained within shadow boxes, neatly laid out in rows and individually labeled. Vallarino’s signature T-pins pierce through the torso of each, and their bodies extend limp, facing upward toward the viewer, again highlighting that moment of release at death. Each label includes a date, location, name (first initial and last name), followed by “Human, Unknown.” The provided names will be familiar to many, including A. Eichmann (Adolf Eichmann), A. Jackson (Andrew Jackson), G. Yeardley (George Yeardley), and P. de Leon (Juan Ponce de León). The tombstone information, as it is called in the museum world, helps point viewers to a specific genocide. This body of work underscores the results of unaddressed prejudice and grounds viewers in its harsh realities. Bias and prejudice can lead to violence and death on a massive scale, as seen in these instances selected from the many that populate history.

It is tempting to disconnect from these big moments of genocide. I think many of us believe that we could never be part of such atrocities. However, it is important to consider that these events do not occur overnight. There is build up, and the key tool involved in that build-up is apathy. Not everyone in a society must feel hatred towards those being annihilated; there just needs to be enough people who turn a blind eye and choose inaction. Thus, it is important to think of the moments in each of our lives when we see the suffering of others and are desensitized to it. With Empty Tides and Offerings, Vallarino brings clarity to some of these local, everyday moments.

Empty Tides and Offerings rests just above Genocide Samples. It is comprised of five fast food cups gathered from panhandling individuals without adequate housing. Once again, we see Vallarino’s signature humanoid butterflies, though this time they are black with dark wings and are dramatically posed on the rims of the cups. Most have seen a panhandling cup, and probably do not give these objects much thought. At the present moment, there is a massive housing crisis in the U.S., meaning that there is a horrific numbers of unhoused people. Many cities are developing ordinances to criminalize encampments and panhandling, and are utilizing tactics like encampment sweeps to push the unhoused from the areas they call home. While there is widespread acknowledgment that stable housing is currently unattainable for many due to a variety of factors, there seems to be a desire to render this crisis invisible. The focus appears to be on pushing the unhoused from view, rather than truly addressing the causes of this crisis. Empty Tides and Offerings prompts visitors to pause and take into consideration those they pass on the street without offering much care.

What I appreciate most about Vallarino’s handling of this work is his inclusion of the rounded vitrine again. A vitrine gives prominence to sculptures by elevating them, which Vallarino is purposefully doing here. There is a fine line around properly and respectfully depicting individuals experiencing crisis. Undoubtedly, it is important for artists to document the issues people face, including moments of pain and crisis. However, there is a point when it becomes sensational and holds individuals up for judgment; this is when the bridge of understanding and empathy that can be forged by viewers is lost. Vallarino combats this with his use of the humanoid butterfly. It adds a relatable element to the cups and provides a sense of individuality within the housing crisis. However, the piece does not provide specific individuals as reference. Instead, the anonymity of each person forces us to focus on the system and institutional roots of the bigger challenges, rather than identifying individuals and projecting personal bias onto their stories. 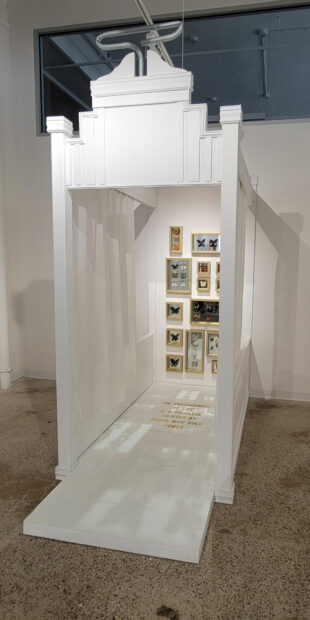 One of the most powerful and controversial works in the show is The Preciousness Of Life Confessional. Here, Vallarino employs the structure of a Catholic confessional, complete with ornate entry featuring a T-pin that serves as pinnacle, and thin white curtains extending along the sides. White planks with gold text reading “THE PRECIOUSNESS OF LIFE IS A PRIVILEGE ENJOYED BY THOSE WHO HOLD POWER” form the base of the structure. Viewers’ eyes are guided by the text towards a mirror covered by butterflies at the rear of the structure, and in the shadow of a T-pin.

Confessionals are spaces where we go to confess our sins and seek forgiveness from the Lord. However, Vallarino asserts that the first step in the process is confessing within ourselves, which requires looking honestly at oneself and one’s actions. When viewing this work, visitors are compelled to see themselves in the mirror. The artist is inviting us all to literally reflect on the role we each play in perpetuating systems of inequity. It also begs the question: which lives are held up as precious and which lives do not garner the same interest and sympathy? This is a gut-check moment, where viewers are forced to confront themselves in the mirror and really ponder their relationship to that question.

Vallarino’s The Butterfly Case is a provocative show that invokes Catholic symbolism to challenge viewers’ own values and ask difficult, introspective questions like: What is precious to you? And, do your actions align with your values? Visually engaging and beautifully crafted, all of the works in this exhibition prompt visitors to be attentive to the many interactions that cause harm. As Vallarino said in his statement, “It is part of the human experience to avoid pain and humanity prefers to ignore painful truths rather than to confront them. As an artist addressing social issues, I feel a responsibility to create artworks that evoke questions with respect to our own behaviors towards others.”

The Butterfly Case | Bernardo Vallarino is on view at Love Texas Art in Fort Worth through January 7, 2023.

A Walk Through the Love Texas Art Studios...