Signs, Symbols, and Monoliths: Isadora Stowe at the El Paso Museum of Art 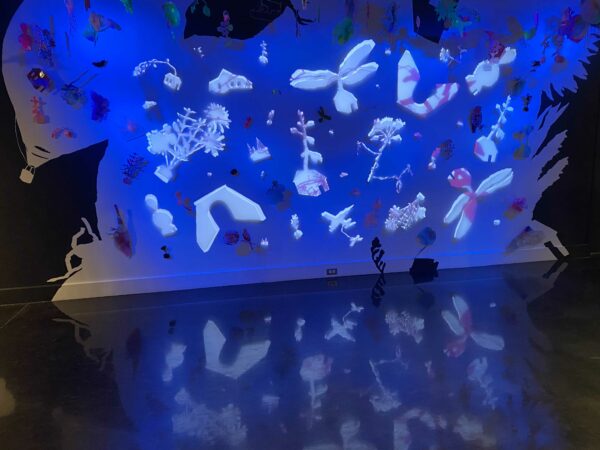 “Isadora Stowe: illuminated” (detail), on view in the Dede Rogers Galley at the El Paso Museum of Art.

Near the entrance of the El Paso Museum of Art in downtown El Paso, Texas, is an eye-catching introduction to Isadora Stowe’s solo exhibition, illuminated. Stowe, a New Mexico based artist and professor at El Paso Community College, uses a variety of media throughout the expansive Dede Rogers Gallery, including photosensitive paint, and the result is rife with symbolic images of the Southwest. Cacti and desert flowers burst out of small square houses, and planes, ribbons, birds, moths, maps and striped candies abound. Even carrying the UV flashlight around and seeing the blue glow of light-sensitive paint reminded me of searching for scorpions after dark, a common practice in the desert.

Situated in an expansive black room, Stowe’s day-glow color videos and installations — all mirrored by the reflective floor — create a 360-degree immersive effect. In this way, Stowe’s work is reminiscent of current trends like Meow Wolf and Houston’s Seismique. Without adding too much to the growing screeds for and against this type of installation, I can say that I always leave Meow Wolf wishing to see each individual “portal” [or whatever the rooms are called] in an isolated, traditional gallery setting. Moving from room to room, each filled with light, sound, texture, and surface treatment on everything but the exit sign, it’s easier to lose sight of the artist’s installation and feel swept up and let down by the wow-factor. It’s not that established exhibition spaces elevate things into art in particular, but when artwork spanning all six walls has room to breathe, I’m better able to appreciate it wholly — critically — even if sensory overload is the point. Suffice to say, it was exciting to experience installation-based sensory art without falling prey to current trends of “theme park for micro-dosers” (or worse, selfie fodder). Stowe’s installation allows for contemplation, and immerses the viewer in the work with nuanced transportive qualities rather than gimmicks.

Sprawling black and white flowers the size of the wall, birds, ships, power lines, and calligraphic gestures that break away and curl into crisp abstractions are visually arresting, equal to the fluorescent red and blue slow-moving projections that flank the gallery. Swaths of small plexiglass cutouts hang from the ceiling, reminiscent of a market with herbs dangling overhead. These serve as touchstones in the exhibition, commanding that we “stand back and look at this for a minute!” However, the strongest efforts in the show occur in the smaller circular plexiglass paintings and prints that float half an inch off their respective walls. Particularly, the works in the inner sanctum of the room — isolated between four temporary gallery walls — have motion-sensing sound functions. 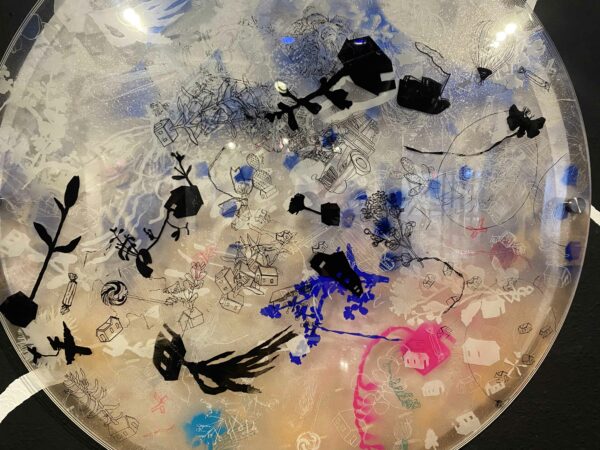 “Isadora Stowe: illuminated” (detail), on view in the Dede Rogers Galley at the El Paso Museum of Art until March 12th, 2023.

Throughout illuminated, noises begin to play when the viewer approaches a different display. Recordings are quiet and play over each other in quick succession. I heard birds or frogs, wind, helicopter blades, planes, rumbling thunder, radio (or talking), and what sounded like an infant cooing. The overlapping, layered effect of the sounds mimics the coinciding images throughout the exhibition. When viewed at a smaller scale in the plexiglass works, the motifs of flowers, moths, and balloons are harder to decipher, lending the work a certain amount of complexity. While these could be vignettes of Stowe’s personal life, thematically they are also more universal and/or political. The hovering, semi transparent pieces cast muted shadows, and swipes of paint blur and confuse the symbols scattered across the circular work. These delicate moments serve as meditative spaces for the entire show, where the smaller works capture the larger whole, like a microcosmic moment of a larger installation that spirals and funnels inward.

Much like the painter Laura Owen’s large and layered works, repeated images and patterns function similarly to our digital world — endless referential concepts from a single origin. It’s impossible to view Stowe’s work without connecting it to place. Stowe lives and works along the New Mexico/Texas/Mexico border. A simple Google search of “the border” yields directions to the nearest U.S./MX border patrol checkpoints, restaurants, news stories on refugees, COVID, Herschel Walker, Border Patrol agent suicides, border wall flooding damages risks, an Ed Sheeran, Camila Cabello and Cardi B music video, and a Southern Living article on “The Friendliest Little Border Town in Texas” — all on the first search page. In this way, isolated phrases or images are anything but isolated.

illuminated, in particular, activates most of the senses and contributes to the meaning of Stowe’s work, which mimics the conglomeration of personal identity that is a fluid fusion of both inner and outer forces. Through sound, I was transported to home, an airbase, the desert. The intense colors of Stowe’s work create a heightened mood, and the images in illuminated evoke their own associative train of thought. Throughout the exhibition, I’m reminded that the artist is a person living in the Southwest, experiencing life both as an active participant and keen observer of the people, animals, and cultural space around her.

From the Wikipedia entry on Semiotics: “meaning can be intentional such as a word uttered with a specific meaning…Signs can also communicate feelings and may communicate through any of the senses: visual, auditory, tactile, olfactory, or gustatory (taste.)” As with all signs and symbols, decoding their significance can resonate with deeply personal meaning, hotbed political statements, concealed narratives — or a combination of the three. In the show, birds can be read as migrants, lifetime mates, commitments as pets, endangered, predators and prey, symbols of a nation, or of peace. Cacti as pain, life, water, resilience. Houses read as safety, danger, love, loss, change, assimilation, even dreams. The nuanced dance between the universal and the personal is a strength in Stowe’s visual taxonomy, and she presents us with the opportunity for complicated meaning-making in a space where overarching themes of living in the borderlands, family, and identity are far from monolithic.

Isadora Stowe: illuminated is on view in the Dede Rogers Galley at the El Paso Museum of Art through March 12th, 2023.