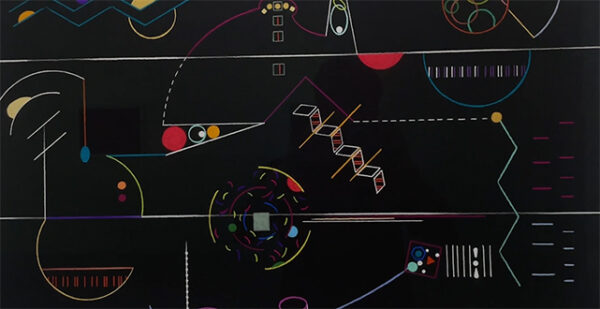 “Gallery Sonja Roesch is pleased to announce Mokha Laget’s 4th solo exhibition with the gallery featuring a recent series of pastel drawings on black mouldmade paper. The exhibition will be on view from November 12th until December 31st, 2022.

The Visual Scores allude to a constellation of contemporary music notation initially pioneered in the 1950s by such composers as John Cage. Sometimes Laget draws a score based on actual experimental music, at other times she interprets the imaginary music in her mind. Music has long held a visual fascination for Laget who, early in her career, created collage works on 14th-century hymnal pages. To Laget those works were about processing her multicultural identity in a universal language and include references to literature, history, and science. Like her shaped canvases which liberate her paintings from the rectilinear format, these drawings provide the freedom to interpret visual content. And like her paintings, the drawings glow with colors inspired by the North African landscape in which she grew up as well as the New Mexico desert she has called home for the last 25 years.

Mokha Laget was born in Algeria and spent her early life in North Africa, France, and the United States. She holds a BFA from the Corcoran College of Art and Design in Washington D.C. where she worked from the early 1980s through the late 1990s, as well as a postgraduate degree from the School of Foreign Service at Georgetown University. She has worked as an independent curator, published translator and poet. Her work is exhibited nationally and internationally. Laget currently lives and works off the grid in the mountains of New Mexico.”