In a press release announcing the new projects, Ms. Faust remarked, “Following a fruitful initial exhibition for the Main and Fannin showcase windows that concluded in September, I am thrilled for the new artist groups – Lisa Morales and Stacy Gresell at Fannin and a team led by Maria Rodriguez at Main – to bring their dynamic works of art to life.” 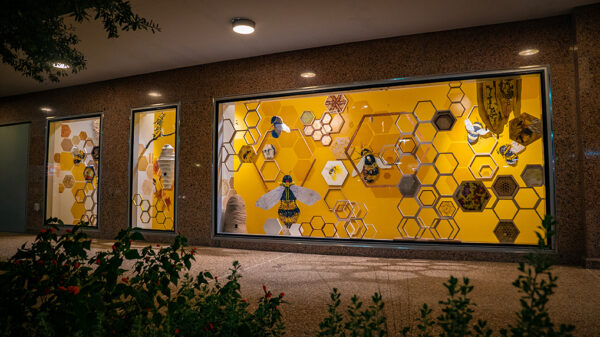 Ms. Morales and Ms. Gresell, both artists working out of the Winter Street Studios in Houston’s Sawyer Yards, have collaborated for years using a variety of media such as paper collage, encaustic, wood, metal, and found objects. The duo created the Fannin Street window display titled The Collective Hive, which is filled with hexagonal-hive shapes, hive forms made from paper, and various-sized bees created from recycled and repurposed objects. Ms. Morales and Ms. Gresell sourced the materials for the installation from the Ion community, who donated items such as keys, typewriter parts, old instruments, and toy cars.

The Main Street window, titled Exploración Orgánica, was created by a team of artists led by Maria Rodriguez and including Miriam Mireles, Bryce Saucier, Timothy Hudson, and Victoria Armenta. This more abstract piece features videos of brightly colored chemical interactions from the mixture of oils, acrylic paint, ink, alcohol, milk, and water, which are projected on organic forms floating in the window space.

The current window installations will be on view through May 2023.