The Crow Museum of Asian Art of the University of Texas at Dallas has debuted Cast: Molding a New Museum for UT Dallas, an exhibition that provides a look at the design of the museum’s second location, which is currently under construction on the university’s campus in Richardson. 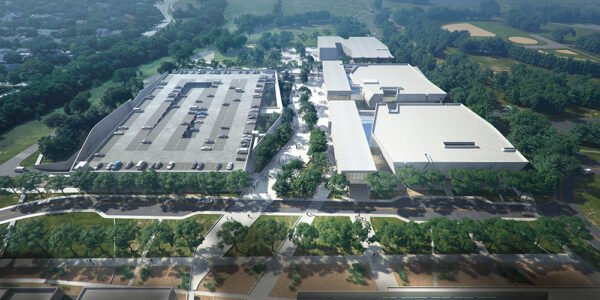 A rendering of the Edith and Peter O’Donnell Jr. Athenaeum. Image courtesy of the University of Texas at Dallas.

Earlier this year, the University of Texas at Dallas (UTD) broke ground on the Edith and Peter O’Donnell Jr. Athenaeum, a planned cultural district that will occupy about 12 acres on the southeast corner of the school’s grounds. The district will feature three new arts buildings, including the second location for the Crow Museum of Asian Art, a performance hall, and a museum for craft arts of the Americas. The Athenaeum is possible because of a $32 million gift from the O’Donnell Foundation, which also funded the creation of the Edith O’Donnell Institute of Art History (EODIAH) in 2014.

In 2019, the Trammell and Margaret Crow family donated their entire collection along with $24.5 million of funding to support the building of a new museum on the UTD campus. In addition to this new location, The Crow Museum will maintain its downtown Dallas location, across the street from the Nasher Sculpture Center. The university has also received gifts of three collections of Latin American folk art that will form the basis of the other museum to be constructed. The Roger Horchow Collection includes 200 Mexican sculptural works such as painted wood, ceramic, and papier-mâché. The Laura and Dan Boeckman Collection of Latin American Folk Art focuses on more contemporary Mexican folk art, created from the 1980s through present day. The Bryan J. Stevens Collection of Masks of the Sierra de Puebla features 1,600 dance masks from the Sierras north of Puebla, Mexico.

The Crow Museum’s current exhibition showcases 3D models of the new 68,000-square-foot museum, designed by Morphosis, a global architecture firm whose other designs include the newly opened Orange County Museum of Art, the Korean American National Museum in Los Angeles, and Dallas’ Perot Museum of Nature and Science. Additionally, renderings demonstrating the design process, highlights of key players such as designers, architects, planners, and leadership, and selections of works of art from the Crow, Stevens, Boeckman, and Horchow collections will be on view in the show. The exhibition was co-created by the Crow Museum and Morphosis and curated by Amy Hofland, who is the senior director of the Crow Museum.

In a press release announcing the exhibition, Ms. Hofland stated, “We are forging the northern expansion of the Crow Museum of Asian Art within the greater concept of the Athenaeum – one museum, two locations. This growth for the Crow Museum will allow us to be more accessible and relevant to the campus, which boasts a significant Asian American student population, but also the growingly diverse communities within the North Texas region. This was the 2nd century aspiration of the classical Roman Athenaeum – exchange and dialogue around inspiration from works of art of all forms.”

The Crow Museum at UTD will include 16,000 square-feet of flexible gallery space and additional space to display new acquisitions or temporary exhibitions. The building will also have a state-of-the-art conservation lab, seminar rooms, administrative offices, art storage, and the Brettell Reading Room, which will house the personal library of Dr. Richard Brettell. Founding director of EODIAH, Dr. Brettell was an important advocate for and leader behind the Athenaeum.

Cast: Molding a New Museum for UT Dallas will be on view through March 5, 2023, at the founding site of the Crow Museum, located in the Dallas Arts District at 2010 Flora St.