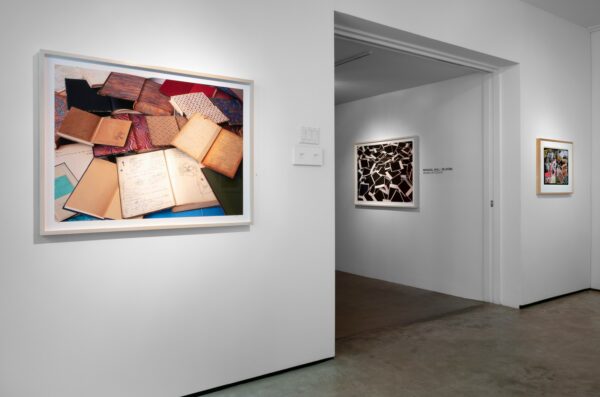 “Moody Gallery is pleased to present an exhibition of recent photographs by MANUAL (Ed Hill / Suzanne Bloom). Being in Touch marks their eighteenth exhibition with the gallery and will be on view September 24 – November 5, 2022. The exhibition is in conjunction with the FotoFest Biennial 2022.

The artists state – ‘Among other things, postcards are artifacts. Over the past four decades we have accumulated hundreds of these cards. Their messages and/or beauty and diverse charms continue to attract us, and because of this they are difficult to discard. Instead we decided to repurpose them into a kind of meta-art, a process we began in 2014 as part of our series Now & Then.

In the introduction of her recently published book, Postcards; The Rise and Fall of the World’s First Social Network, Lydia Pyne recognizes the irony of a small card, often inscribed with a succinct personal message, traveling openly to its intended destination. ‘Postcards are personal,’ she says, ‘…but postcards themselves are deceptively complex objects and the stuff of the first worldwide social network.’

A few years ago we wondered if, like ourselves, others were in the practice of collecting or holding onto postcards despite living in the age of smartphones and hypermedia. The answer to our simple question to six friends, ‘Do you have a stash of postcards?’ lead first to the five pieces in Postcard Suite I. Each card in the five layered, mandala-shaped groups was borrowed from their individual personal collections. The sixth friend’s collection, over 300 art postcards she had acquired from visits to museums, exceeded the bounds of the mandala shape and prompted the even deeper, more extended array seen in History of Art I, and History of Art II.

In 1990 we had inherited a unique cache of artist-made cards, both handmade and mass produced. These lay dormant in their storage boxes until 2014 when their rediscovery inspired several other works included in our exhibition, Being in Touch. For us, a postcard’s potential to communicate as social media, coupled with their common size parameters and other formal aspects, make them a very compelling visual medium with which to create. In this sense we would say the value of postcards is as protean as it is timeless.’ -MANUAL (Ed Hill & Suzanne Bloom)

Unlike other recognized collaborative duos, Ed Hill and Suzanne Bloom chose to create a third name for authorship of their images and conceptual projects. To that end, MANUAL was established in 1974. MANUAL’s work is represented in many permanent public and private collections including major museums in New Your City, San Francisco, Los Angeles, Chicago, Houston and Hanover, NH. Their photographs, videos, and multimedia installations have been shown widely, both internationally and throughout the United States. In addition to the numerous grants, they have received over the last 48 years, they are the honored recipients of a 2021 Guggenheim Fellowship for their current multifaceted project, BEECH//BOOK; an etymological pairing.

A retrospective of their work, MANUAL: Two Worlds, The Collaboration of Ed Hill and Suzanne Bloom, organized by the International Center of Photography and shown there in 2002, was exhibited in an expanded form at the Museum of Fine Arts, Houston in 2004. The accompanied catalogue, MANUAL: errant arcadia, features essays by curator Edward W. Earle, writer Lucy R. Lippard, as well as the artists. Their first exhibition at the MFAH, Suzanne Bloom and Ed Hill (MANUAL): Research and Collaboration, took place in 1980. FOREST\PRODUCTS, an extensive experimental multimedia installation, was mounted at the Contemporary Arts Museum, Houston, in 1992. MANUAL has been represented by Moody Gallery since 1983.