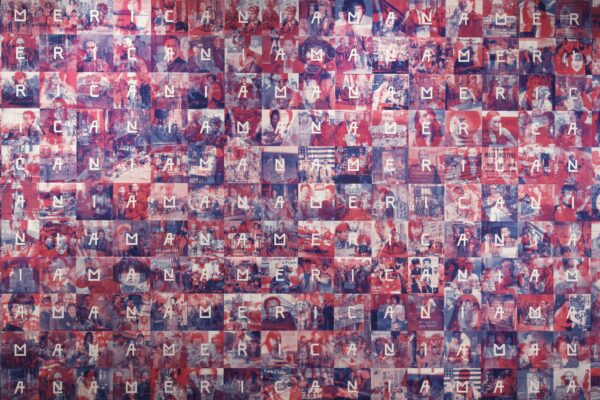 Alice J. Lee’s exhibition Between Two at the Juanita Harvey Art Gallery at Midwestern State University in Wichita Falls combines her vested interest in the dynamics of language and culture. Lee’s work as a typographer combines the Korean and English alphabets to create a new generative language system from each of them. Between Two also illustrates the juxtaposition of Korean and American cultures as experienced by the second-generation Korean-American. artist

Seeing Patterns is a set of six images along with type designed by Lee. Each photograph was taken by the artist in South Korea and overlaid with alphabetic characters that share elements of the Korean and English languages. An opposite wall utilizes the same strategy with images taken in America. In designing the alphabet, Lee wanted each letterform to retain its defining characteristic. For example, “I was able to retain the crossbar of the ‘A’ and the short-horizontal stroke of the ‘ᅡ ,’ along with their stems. My strategy was to identify the first and second most important visual characteristics of each letter, the ones that helped differentiate it from any other letter, and then find a way to combine the two into one cohesive symbol,” says Lee. This piece is an introduction to the entirely generative alphabetic system that the artist has designed, which she intends to turn into a font this year. There is already interest — several people have inquired as to how to access the typeface for personal use. 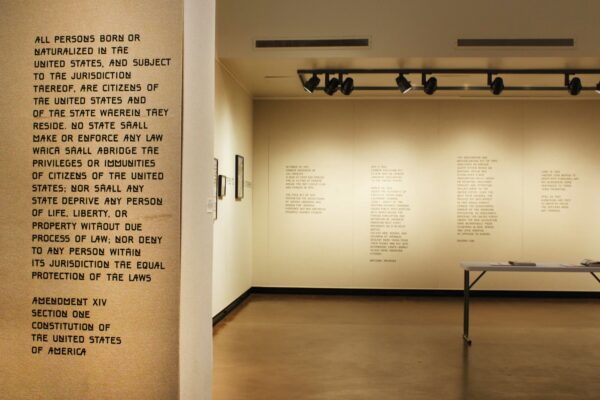 Lee believes language and alphabetic systems have the ability to empower. She has researched and written extensively on the history of the construction of the Korean alphabet. She points to Sejong the Great, the fourth ruler of the Joseon dynasty of Korea, inventor of the Korean alphabet in the 15th century, as a source of inspiration for her dedicated interest in typography.

Prior to the 15th century, Koreans utilized the Chinese writing system, largely because of Chinese cultural imperialism on the Korean Peninsula. When Japan invaded Korea in the late 19th and early 20th centuries, Koreans were forced to adopt the Japanese language and forbidden to use their own. During this time, the Korean alphabet became a great source of pride for Korean society as a means of holding on to their identity. From their experience of that occupation, Lee’s grandparents conveyed to her the strength derived from the Korean alphabet at the time.

For her wallpaper installation, Between Two, II, Lee started by collecting images from the Library of Congress website. Her search began broadly, with phrases including “Asian-American,” which eventually led to more focused examinations of specific Asian identities and events related to them. The Chinese Exclusion Act, Japanese Internment, the 1965 Immigration Act, and recent AAPI hate crimes are events represented in the wallpaper designed by Lee. The wallpaper is printed on a risograph with overprinting; she used blue and fluorescent pink tones to give the images uniformity in color, and where two images overlap within each square, shades of purple emerge. 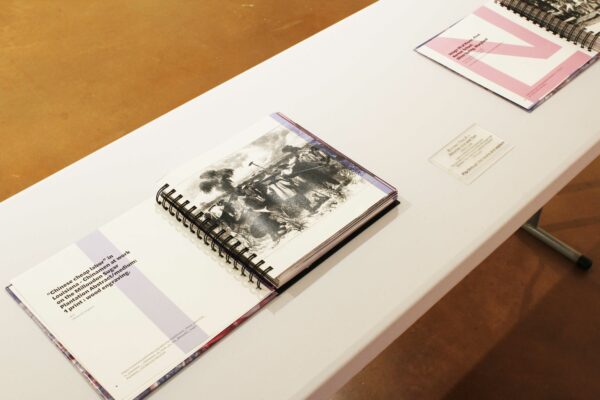 Alice Lee, “Between Two, II,” Volumes I and II, laser-printed and hand assembled.

Between Two, II also includes an interactive installation. Spectators are invited to change out projected images from a catalog of transparencies provided by Lee. Viewers are also asked to contribute to a wall of stories describing their experiences with immigration. Notably, some visitors recount the histories of their ancestors coming to America long ago.

The exhibition, made up of artist books, wallpaper, typography, illustration, and interactive installation, invites viewers to meditate on both the Korean-American experience and the overall immigrant experience in America. While parts of the exhibition confront troubling events and aspects of Korean and American history, each space in the gallery engages the viewer with sharp and thoughtful imagery, providing an accessible inroads to complex ideas and conversations.

Between Two is on view through November 4, 2022. The Juanita Harvey Art Gallery is free and open to the public from 8 AM to 5 PM, Monday-Friday.