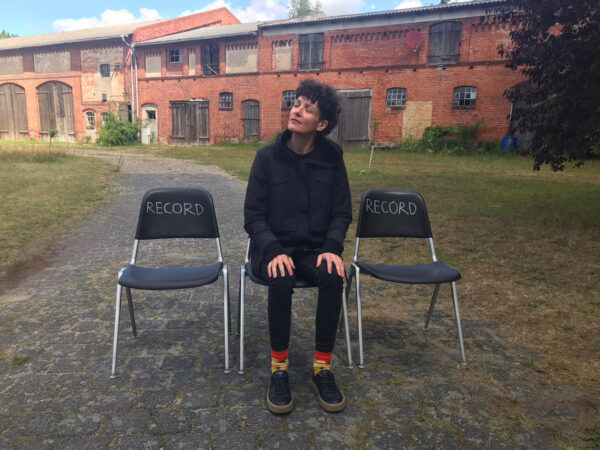 This summer, I had the great pleasure to attend my first artist residency at the Field Kitchen Academy, located near Perleberg, Germany at architect Tilman Schall’s 1830’s farmhouse estate, about two hours outside of Berlin. I don’t normally apply to residencies, since I can make my work in my home studio. However, this one caught my attention, due to its unique mission.

Brainchild of curator Ece Pazarbasi, the residency celebrated its third year this summer. I applied all three years — was shortlisted the first year, unable to travel year two due to COVID restrictions, and was finally accepted this year. There is something to be said for perseverance.

Field Kitchen Academy (FKA) is an experimental sound art residency that focuses on bringing together creatives from diverse backgrounds to collaborate together, workshop-style, over a period from one week to one month. Each week, workshops are facilitated by a different master artist in which the residents research, investigate, and create in the field and around the table. Coming together at the table to break bread daily is a major component of the program, with food as a conduit for forging relationships with one another. Twenty-one of us ate together daily, with a Turkish chef preparing our meals.

The interdisciplinary aspect of the residency, combined with the opportunity to collaborate with other creatives and artists from around the world, as well as the emphasis on experimentation rather than completion of a particular proposed project, interested me. It was a transformational experience, one that will shape my future artistic practice for years to come. I have an idea for a future experimental sound project that involves recording female and non-binary creatives sounding within a sculptural environment. 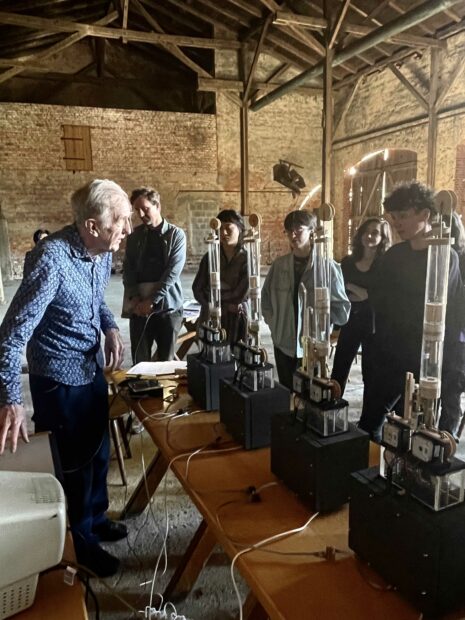 Led by renowned sonic thinker, composer, and sound artist Sam Auinger, my week was filled with daily sound walks in a picturesque rural hamlet complete with haystacks and windmills, field sounding experiments, and lots of table discussion with residents from France, Argentina, Turkey, Austria, Germany, Poland, the Netherlands, Scotland, and India. I was the only artist from the United States. Many residents had a musical or sound engineering background. It was a bit like an intellectual, yet playful summer art camp for grown-ups.

Our workshop theme was “The Voice as Object, the Object (H)as Voice.” Training our ears to hear seems like a simple concept, yet proved to be challenging. Our silent sound walks reminded me of Pauline Oliveros’ Sonic Meditations for deep listening. These exercises heighten sensitivity and awareness, not only to sounds, but to our bodies within the environment. By midweek, we were using rocks to create sounds with various objects in our environment. My own practice is heavily influenced by the Fluxus movement, and some of our experiments were rooted in the creation of Fluxus-like scores. Just imagine my phone calls home, during which I explained my day: “Today we walked in silence and played with rocks.” For those who are not artists, it’s difficult to make sense of the importance of creative play and approaching the world with childlike wonder and curiosity.

The residency also hosted guest artists and thinkers, including philosopher Graham Harman and sound artist Martin Riches. Graham Harman is best known for his work in Object Oriented Ontology, or OOO for short. I had no idea what that was, so I read some interviews with him and a few essays to familiarize myself with his work and how it might relate to art and art making. Terms like the “metaphysics of objects” and “speculative realism,” or “freeing objects from their human captivity” weren’t much help. In preparation for his visit, I asked some of my fellow participants to make a sound piece as a welcome gift. I recorded us inside an old barn silo singing, chanting, and/or whispering “OOO,” and then mixed the voices together in post production. I was a bit nervous that Harman wouldn’t like it, but he seemed genuinely pleased with the sound work. 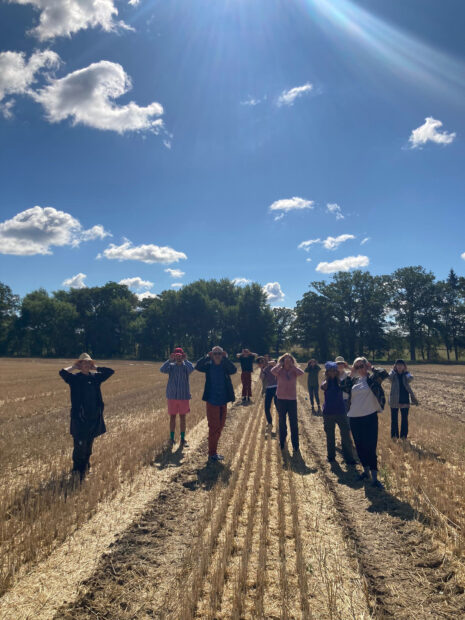 Residents of the Field Kitchen Academy enjoying a sound walk.

Martin Riches brought his magical sound machines — sculptural works that produce human sounds. His work The Talking Machine has pipes with noise makers and a resonator inside that is formed like a human mouth. His work MotorMouth is an acoustic speech synthesizer that has mechanical parts that simulate the human mouth’s components that produce speech, such as the teeth, tongue, larynx and moving lips. This was definitely one of the highlights of the week. 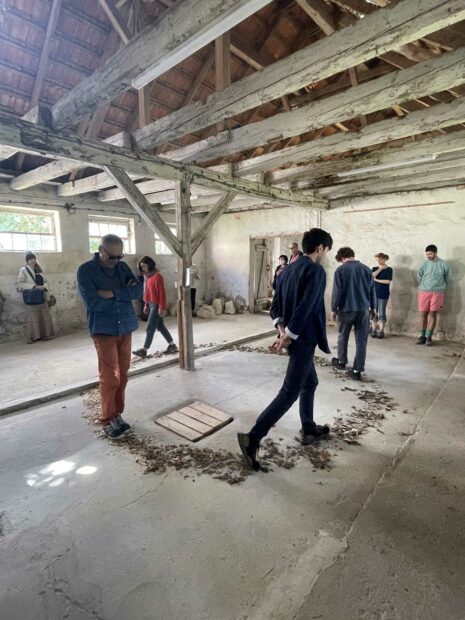 Residents participating in a sound performance at the Field Kitchen Academy.

The last day we engaged in live performances throughout the property, based on our investigations during the week. Some of the work included a sound piece of bees, where a microphone was placed just outside a wild beehive in a tree. Guests were invited to sit in lawn chairs with headphones listening to the buzz; it was very disconcerting. Another piece allowed visitors to walk in a circle of dry leaves, activating the space with the crunching sounds under their feet. My work included a performance of all the female and non-binary-identifying participants inside the barn silo whispering, singing, or sounding the phrase, “The Voice as Object, the Object (H)as Voice” in their first language.

The residency has inspired me to pursue more sound work, especially vocalizing within certain spaces and objects with the idea of embodying sound in the object. I’m still not sure if this counts as an OOO-inspired art work, but I am trying to approach nature and the world in a less human-centric manner.