In conjunction with its current exhibition IN A DREAM YOU SAW A WAY TO SURVIVE AND YOU WERE FULL OF JOY, The Contemporary Austin has unveiled a mural, of the same title, by text-based artist Jenny Holzer. 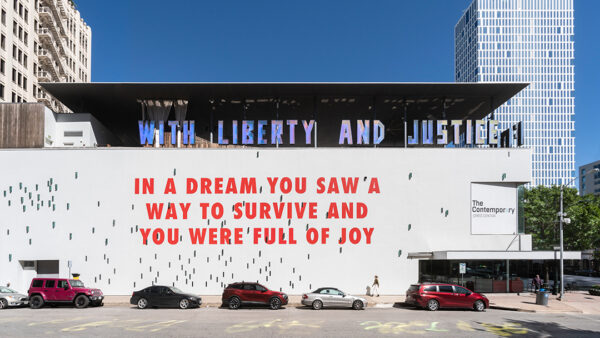 Jenny Holzer, “IN A DREAM YOU SAW A WAY TO SURVIVE AND YOU WERE FULL OF JOY,” 2022, acrylic latex paint on stucco. Text: Survival, 1983–1985. © 2022 Jenny Holzer, ARS. Image courtesy The Contemporary Austin. Photograph by Alex Boeschenstein.

Like the Daniel Johnston mural that was on view through last month, Ms. Holzer’s mural is located on the West 7th Street-facing exterior wall of the museum’s Jones Center building in downtown Austin. The mural consists of large red capitalized text set against a white backdrop. The text is pulled from Ms. Holzer’s series Survival (1983-85), which presents dozens of phrases that relate to danger, coping, and death. Though the series was originally presented on electronic signs, it has also appeared in a variety of formats, like billboards, plaques, stickers, granite benches, light projections, and condom wrappers.

In a press release announcing the mural, exhibition curator Robin K. Williams spoke about her decision to use the text as the exhibition title. She stated, “This text by Jenny Holzer underlines both the themes and sense of the exhibition in many ways. It’s an evocative phrase, telling a story of possibility and implying critical questions that have guided our thinking around the project: Who, under what conditions, must struggle to survive? What does survival look like for individuals and communities? And, how might the tools of our imaginations help us to find joy and collectively reshape the conditions of our society?” 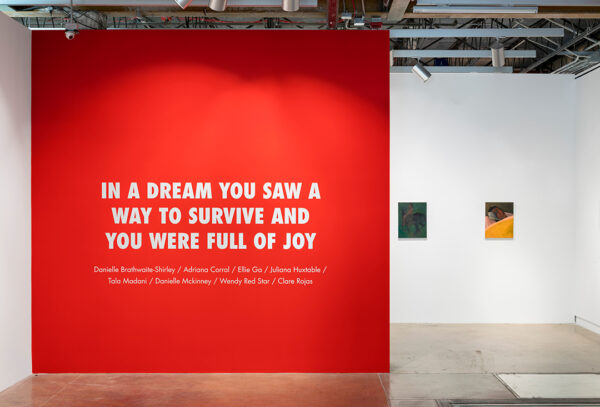 Ms. Williams added, “Our hope is that presenting this text in the heart of downtown Austin, seven blocks from the Texas capitol building, will do the same. The message is simultaneously critical, reflective, and inspiring.”