Common Occurrences: Four Korean Artists in the U.S. at the Nancy Fyfe Cardozier Gallery at UT Permian Basin brings together four Korean-American artists working with reproducible media, either in print, animation, photography or ceramics. Curated by the gallery’s director, Amy Kim, the exhibition showcases works that do not embody Korean tradition and art making techniques directly, but rather those that manifest what it means to be Korean and living and working in the U.S. In conversation with Crow Museum of Asian Art’s recent JooYoung Choi: Songs of Resilience From the Tapestry of Faith exhibition in Dallas, and Asia Society’s permanent display of Lee Ufan’s Relatum (2011), this is a show that ponders the complexity of diasporic Korean art and identity.

The show fills the space with a pattern and rhythm, with Sangmi Yoo’s four large draped prints on the left side of the gallery setting this tone. These are from her project Tides of Resilience (2022), in collaboration with the Crow Museum and NorthPark Center earlier this year. Yoo reworks photographs into prints, breaking down visual recognition in two reproducible media into analog sites where information gets lost by design.

There are two layers to this work: the background consists of horizontal stripes of various colors overlaid with repeating columns of gray stripes, which come together as a checkered pattern with a complex palette. The front layer is hand-cut, based on photographs reduced to two-tones, with the cuts revealing the bricks of colors built underneath. Flaking crumbs of disintegrating colors in the highly abstracted top layer render these semblances of the subject even more diffuse.

There are also smaller, 12 x 18-inch prints from the same body of work on the opposite side of the gallery. Two of the prints reveal a row of flat two-story domestic building facades punching upward with chimneys — possibly from Yoo’s residency in Bangor, Northern Ireland, based on the list of originating cities for the series. The other two prints each reveal motifs found in nature, like a hibiscus flower and a large heart-shaped leaf. The flower in particular is significant because different species of hibiscus can be found in Hawaii and Korea, and each represents a regional identity. Between the various locales that are laser-cut into in these prints, Yoo’s works describe a flitting sense of unsettledness, multiplicity, and purposeful obfuscation that defines diasporic experiences. 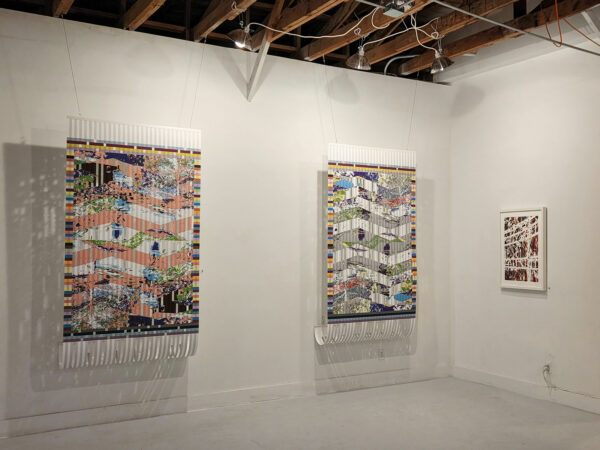 Ray Im’s Relocation (2018) is a long banner of canvas printed with a patchwork of cyanotypes of phantom abstractions. These faintly resemble a traditional Korean textile technique and type called jogakbo, where random leftover pieces of fabric are quilted together in asymmetrically balanced designs. At the base end of the banner, a ceramic vase spills sideways and pins the long canvas to the floor. The vase is a symmetric, elongated form that is elegant in its lack of adornment, save for the blue cyanotype that runs along its surface.

The image that emerges onto the canvas just behind this pottery is that of the pot — the object itself. Referencing Joseph Kosuth’s conceptual opus One and Three Chairs, Im’s work is an ontological reactivation of image and material that allows for the essence of materiality to be revealed, from the coarseness of unprimed canvas, the resonating touch of unglazed ceramic, and the emulsive wash of the indeterminate cyanotype. Im then goes one step further, brilliantly breaking down the conceptual using the framework, or the form, of Korean textiles. Im’s installation, placed between two of Yoo’s banners, seems to oddly break up the continuity of the latter with its blueness, and it may have been better highlighted on its own. However, the irregular rhythm engenders a switch in viewing modes, and instigates a new view into Yoo’s work.

Mizin Shin also has two different print-based series installed in the exhibition. One series, How Things Are Consumed (2022), consists of a large set of clear plastic banners printed in blocky black ink with a complex diagram depicting the industrial processing of potatoes — from farm to product — an exercise in making cycles of production visible and subsuming nature into readymades within the supermarket itself. One of the walls in the gallery is left blank to show the patterned shadows Shin’s work casts onto the wall by the choice of lighting, which is slightly too diffused to leave a purposeful impression. Nevertheless, the choice allows for a unique and exhibition-specific doubling of Shin’s banners in another, more ephemeral form.

Another work by Shin is a set of 18 prints from her Use Your Voice #StopAsianHate (2021) series. The words “Use your Voice” at the top of the page above the hashtag “StopAsianHate” are embossed in various languages on white paper. Languages span from dialects used among immigrant communities in the United States, ranging from Vietnamese, Korean, Russian, Tigrinya, and Slovak. The work was made in support of the Stop Asian Hate campaign during the COVID-19 pandemic. I recall when the movement was initially galvanized by videos of violence against Asian elders in dense metropolitan centers that went viral. Then, in March 2021, eight people were shot dead in Atlanta. Four of the women killed were Korean American, two were Chinese American, and the white shooter murdered them at the massage parlors where they worked because he wanted to punish them for his sex addiction.

What I recall most about the circumstances of this moment are organizations like Red Canary Song, who mourned the women’s passing by creating online spaces where they could be memorialized, and the folks who helped raise money online for their families. I also recall how many leaders in Asian-American and Korean-American communities erased the fact that this tragedy, this femicide, was a product of misogyny, and institutional failures in legal frameworks for women in immigration limbo, particularly those in the industry of sex work. I had hoped that it would be possible to fight racism while also fighting for women in these poor working conditions, but at the time it seemed that the dire circumstances that led to the tragedy were erased for the “greater good.” Shin’s blank, unevenly embossed prints seem to replicate these histories, screaming out “Stop Asian Hate” over and over — seemingly without an answer to everyone, and to no one in particular.

After seeing the show, I looked further into this series, which took me right back to the height of the pandemic and its feeling of unresolved trauma from isolation and alienation. Shin fundraised for the Asian American and Pacific Islanders (AAPI) community with this series of prints and put together a series of screenprinting workshops based on it. Altogether she raised $3,200. This series was a way for Shin to process the trauma in a connected way and bring community members from various origins together to do something tangible against invisible, biased odds. Despite my reservations about turning murder victims into martyrs to heal from racial trauma, without addressing one of the key roots of the problem (sexism), it beats staying silent. On this last point, we agree. 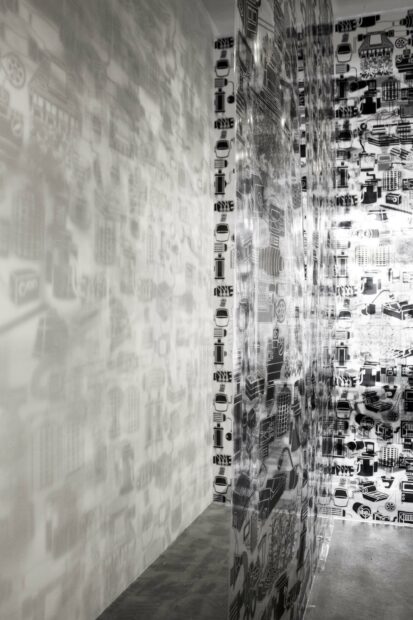 Rounding the corner of the gallery space is Yuna Kim’s video animation piece, which is a surprise as the viewer comes around the modular wall where Shin’s embossings hang. Stacking, Collapsing, and Stacking (2022) is a single-channel animation about the poetics of uncertainty and transition, captured through the moments of in-betweenness of the gaps of drawings made with graphite and black ink, with a playful mishmash of sound effects. Short vignettes of playful, non-sequential actions are animated together. In one, a long row of flying geese migrate to the sound of a mouth blowing breaths, attempting to emulate the wind. In another, a basketball encircles the rim of a hoop, and each revolution saves it from either falling in or out, barely maintaining its precarious balance at the edge of becoming a 1 or remaining at 0. There are two hands, one cutting a strip of paper held by the other, like scissors — with matching sound effects of actual scissor blades slicing closed.

The sideways disjunction between what is seen and what is heard politely punctures the stasis of comfort that animation and its typical narrative structure harkens in our collective memories. The medium of graphite captures the ephemeral well, and in Kim’s work, these looping sketches are sometimes joined by escaping, seeping puddles of Korean black ink, an important traditional medium in East Asian painting, which adds a sense of historical slippage.

What does it mean to be ethnically Korean in the context of rural Texas, where one is surrounded by ranching and oil? Unlike major metropolitan areas like Dallas and Houston, there are typically not many Asian Americans who have immigrated to areas like Kingsville — where I live — or the Permian Basin, the largest oil producing region in the United States. Like the basketball on the rim of the hoop, there is a permanent state of indeterminacy in their diasporic experience. I recall a student once asking me about my culture and customs for a project, and expressing an interest in my own otherness. Then, on the other hand, when I have met and chatted with youth while traveling in South Korea, their first association with Texas has been the Texas Chainsaw Massacre, on more than one occasion.

In some ways, being Korean in Texas means being situated somewhere between the extremes of hyper-visibility and total invisibility. Common Occurrences: Four Korean Artists takes a stab at complicating these extremes, and through reproducible media tap dances between identities and places that are indeterminate.

Common Occurrences: Four Korean Artists in the U.S. is on view at the Nancy Fyfe Cardozier Gallery at UT Permian Basin through October 31, 2022. Note: October 30, 2022: elements of this article have been updated for details and accuracy, including the titles of some of the artists’ works.