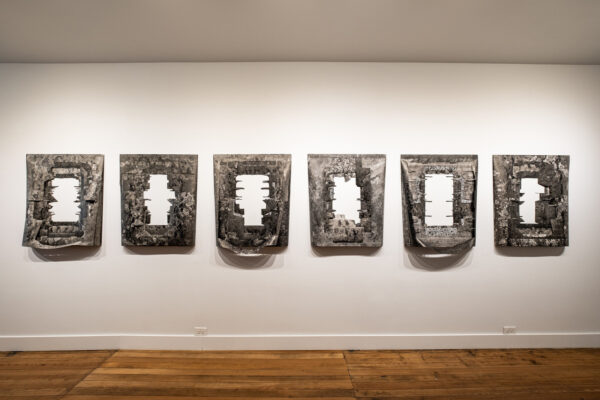 In Delivered and Discarded, on view at grayDUCK Gallery in Austin, artist Yoonmi Nam turns disposable items into delicate reminders of lasting impermanence. Cardboard boxes and plastic containers have been recast as sculptural relics that harken back to the early days of the pandemic. Nam, who teaches at the University of Kansas, was unable to access the print shop and ceramics studio during lockdown. Like many, she and her husband stayed home and embraced the uninterrupted boredom of their circadian rhythm.

“Delivery boxes became highlighted at that time, which in some ways are like the objects that I usually handle,” she recalls. “Detritus holds the idea of being seemingly permanent but very fleeting.”

Nam’s work poetically (and cheekily) reflects the jolie laide of the everyday. The artist’s unwavering interest in unglamorous objects — what often gets tossed in the trash — is an exercise in non-attachment, a way to measure time through the familiar routines that fill our lives with their own birth-death cycle. A mundanity that occurs with such frequency, it becomes all but invisible in the day to day.

The show’s porcelain pieces — a series titled Kept — are actually castings of negative spaces derived from plastic packaging collected during COVID. Despite their previous single-use purpose, each one has transformed into a thing of beauty (and curiosity), displayed as elegant still life arrangements. Coated in a Korean celadon glaze, the jade green “wares” (cup lids, COVID kits, a holder for a half-dozen eggs) mimic a traditional aesthetic found in East Asia. A cookie tray that once cradled Thin Mints has taken on the allure of an artifact from Korea’s ancient Goryeo Dynasty. 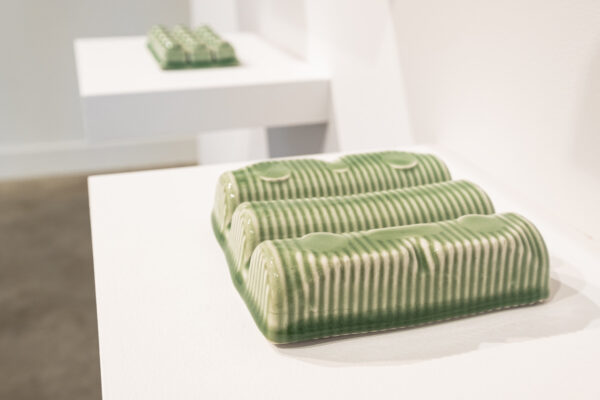 Throughout lockdown, these plastic whatnots kept showing up on Nam’s doorstep, along with the cardboard boxes they came in. Her Delivered and Discarded series — the show’s wall reliefs — were inspired by the latter. Using the boxes’ flattened forms as templates, Nam traced their shapes onto white Tyvek sheets (a thin yet resilient protective lining) and painted the sheets black with sumi ink, spritzing their wet surfaces with alcohol disinfectant. As the alcohol and ink mixed, mottled and splotched patterns took over the Tyvek, imbuing each one with their own abstract characteristics.

Nam assembled these dramatic black cut-outs and played with their sculptural potential until they bloomed on her wall, their layers curling and protruding once gravity took hold. The reliefs (28 in total, including two separate suites) look more like metalwork than paper, even as many retain the original shape of the boxes they were based on. In trading out one material for another — just as she did with her ceramic creations — Nam has called into question the intrinsic value of these objects, and in doing so, the meaning of anything. 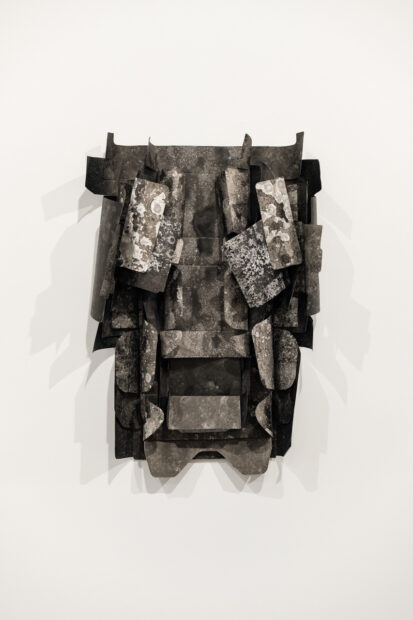 Both bodies of work make for an interesting marriage. Kept (with its refined appeal) and Delivered and Discarded (with its edgy auras) reveal exactly the same thing despite a difference in temperament. Neither contain the original materials that once contained them, and both appear more durable (if not more desirable) in their new form. The artist is telling us something about these objects — the way they are viewed depending on context — but also something about herself.

Nam was born in Seoul, South Korea, and was raised as an only child who learned early on how to quietly take in the world around her. She has lived and studied in several different countries, across several different cultures, bringing an outsider’s understanding to each new place. The work speaks to this observational attunement: the ability to see things up close at a distance. 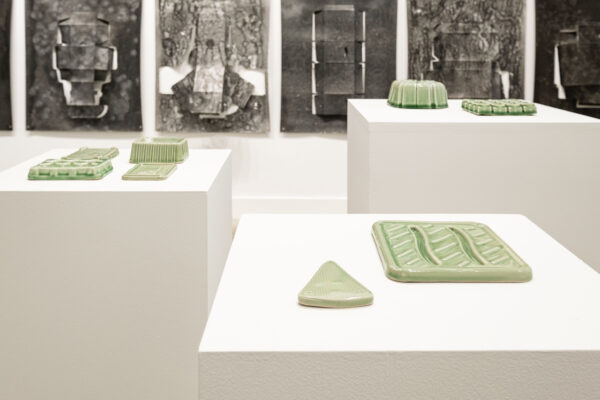 As I first walked into Delivered and Discarded, the show’s motifs seemed to revolve around lockdown, but Nam’s practice points to a deeper ongoing investigation about time and place. How we perceive our own fragility in what we’ve deemed disposable. By turning plastic into porcelain and paper into metal, she has asked us to consider what their interchangeability means. Delivered, discarded — even kept —  there is an unavoidable truth, says Nam: “all of us share the fate of impermanence.”

Yoonmi Nam: Delivered and Discarded is on view at grayDUCK Gallery in Austin through October 23.