Small Epiphanies: Sarah Canright’s “Taking a Line for a Walk” 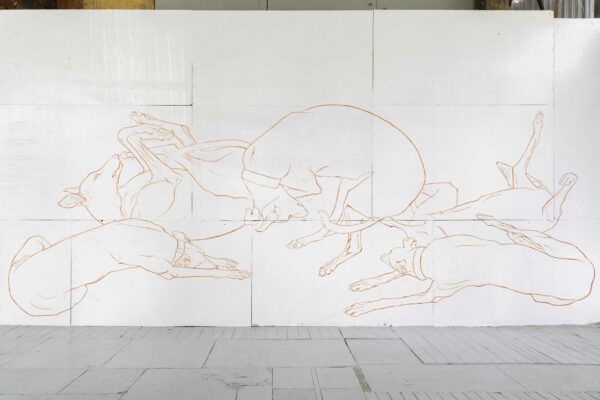 In Taking a Line for a Walk, on view at DUSTY in Austin, artist Sarah Canright has wondrously called the space into existence with eleven large-scale line drawings drawn directly onto the gallery’s walls. Using a favorite subject of hers, the greyhound, she has captured the animal’s poise and grace through positions of resting, stretching, and playing, all while conveying a sense of motion and connection.

“The spirit of dance is very much a part of it, and the abstraction of working out the poses is very much a part of it,” Canright tells me at the show’s recent opening. With assistance from painter and fiber artist Anna Teiche, who helped with both brushwork and layout, the process took an active two and a half weeks to complete. A single color of earthy red was employed, giving an immediate warmth to the walls, which are made up of basic white panels.

“The incisions in the walls led to certain decisions, like that foot being over that hole.” Canright points to a perfectly positioned paw on the gallery’s pockmarked South wall, currently occupied by a pair of looming greyhounds. “I decided these needed to be two really big figures without much detail.” Yet even without much detail, there is a physical precision: slightly serrated tails, pointy little hock joints, hard and soft sinews. A delicate dewclaw, shown on the front right leg of the more restless of the two animals, seems a subtle nod to the model, a retired racing greyhound. (Vestigial for most canines, but essential for the runners.)

The variety of poses throughout the show are an ode to elongation: outstretched limbs, slender snouts, paws like pointe shoes. Though the series embodies a collective energy, each one is its own regal deity. On the North wall, five figures reposing en masse are seemingly unaware of one another. On the East wall, two belly-up bodies playfully overlap, while a third remains curled on its own. Posey aloofness takes on a quality of personhood. Their up-close perspectives produce something of a flea’s eye view, creating optical exercises if not illusions. On the West wall (my favorite wall), a sole greyhound embodies the willing suspension of disbelief with its stiff supine form, legs locked upward, while floating or falling — no, frozen — in time. 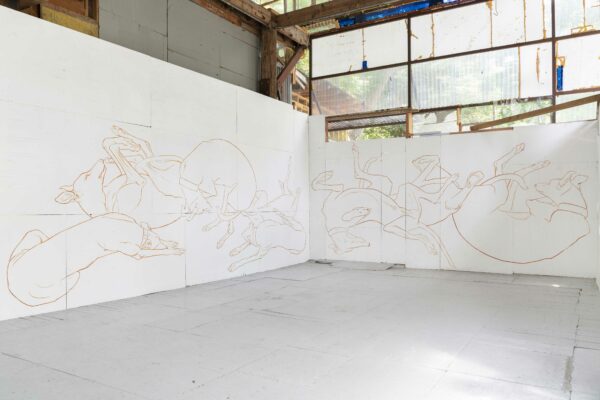 “We really started to understand her obsession with 12th century Catalonian frescos when standing surrounded by these elegant drawings,” expressed Andy Coolquitt, who co-runs DUSTY with fellow Austin-based artist Susan Scafati. “The contortions, the reaching gestures, the yoga positions create supersensory connections with the viewer’s body.”

The show’s inspiration, however, comes from a much earlier epoch. Some years back, the artist came across a large spread in National Geographic magazine on cave art and thought, “Oh … the line is enough!” She held onto the small epiphany until it was time to take the line for a walk: “Other than in some drawings, I’ve just never had an opportunity. But I thought about this all summer.”

This summer marked something of a new chapter for Canright. In May, she retired from teaching at the University of Texas — wasting no time, she took on this project, trying something different and new. And why not? Every great artist with a long and remarkable career is always just getting started.

Canright graduated from the School of the Art Institute of Chicago and showed with the Chicago Imagists in the late 1960s. She moved to Manhattan in 1972, participated in the Whitney Biennial in 1975, and was represented by Pam Adler Gallery in New York and the Phyllis Kind Gallery in Chicago in the ensuing years. She began teaching at UT Austin in the early 1980s — dividing her time between New York and Texas — and accepted a full-time faculty position at the university in the mid-1990s. She has taken part in scores of solo and group exhibitions, including a 2019 Chicago Imagist survey show at Goldsmiths Center for Contemporary Art in London. She has been a visiting artist and an instructor at numerous academic institutions, and was a lecturer at Princeton University for 10 years. For 40 years, she was, and is, a beloved figure at UT: Andy Coolquitt and Anna Teiche are both former students. 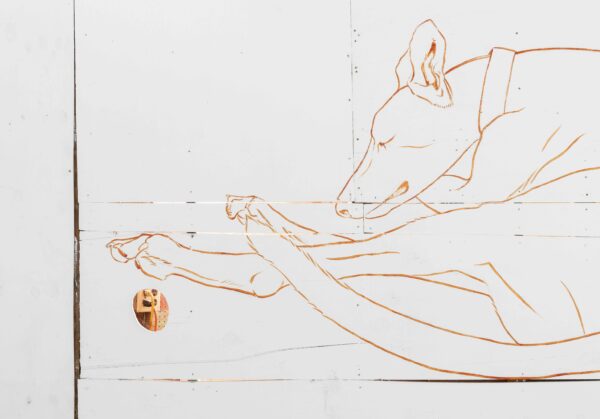 Throughout her career Canright has been celebrated for her figurative paintings, for their mesmerizing sense of spatiality and color, be it the weight of her oils or the sleight of her watercolors. Paintings, of course, cannot compare to the primeval lines of myth-making, yet she has managed to instill the same charisma in these site-specific works. The “compositional facts,” as she calls them, of the gallery’s walls, with their crude surfaces and distinct details (a dozen horizontal bulbs unexpectedly align with West wall’s paws), both confine and create ways for these creatures to exist — for a brief time, anyway.

Dogs have been a model and muse for as long as humans have been making art. I think back to the National Geographic spread that inspired these figures. Did you have this dark red in mind to recreate those cave paintings?

Her answer is unfussy. “I use Venetian Red for watercolors and as an underpainting in every painting I start. It’s a color I’m very comfortable with,” she smiles. “I just like it.”

Sarah Canright: Taking a Line for a Walk is on view through October 8 at DUSTY in Austin, by appointment only: [email protected] IG: dustyyygal