The Texas Cultural Trust, a nonprofit organization that supports access to the arts across the state, has announced the awardees for its 2023 Texas Medal of Arts Awards (TMAA).

Since it was launched in 2001, the biennial TMAA has honored over 100 Texans working in the arts, in categories such as music, architecture, visual arts, design, literary arts, film, and dance. Recent past winners in the visual arts category include Trenton Doyle Hancock (2019), Leo Villareal (2017), and Rick Lowe (2015). The 2021 awards were originally postponed and later were canceled due to the ongoing COVID-19 pandemic.

In a press release announcing the 2023 awardees, Texas Cultural Trust CEO Heidi Marquez Smith said, “We are beyond thrilled to resume the TMAA celebration, after having to postpone and cancel in 2021 due to the pandemic, with an extraordinary lineup of talented Texans who have each inspired and captivated their communities, our state, and beyond. Our organization strives to spotlight the vital role the arts play in our state and our everyday lives. Texas has such a rich cultural heritage that deserves to be recognized, invested in, and celebrated.”

The 2023 Texas Medal of Arts honorees include: 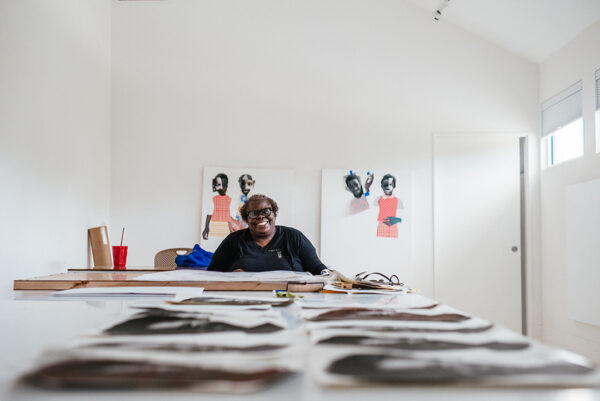 Deborah Roberts, who is known for her mixed-media collages which challenge deep-rooted notions of beauty and stereotypes and feature young Black boys and girls, said, “I was really moved to hear that I would be a recipient of the Texas Medal of Arts Award. As a native Texan, I’m extremely proud.”

The awardees will be honored during two days of events that will take place at various locations across Austin. The celebration will culminate at the Awards Show and Gala Dinner on February 22, 2023 at the Long Center for the Performing Arts.

Congratulations to all the Awardees, especially Deborah Roberts native Austinite and Texan.

The Texas Cultural Trust is honored to celebrate Deborah’s incredible talent. Thank you for sharing your gift with the world!

Well done awardees!!! A special shout out to our friend Deborah Roberts. An Austin gem!