The University of Texas at Austin’s School of Architecture has announced its Fall 2022 Lecture series. 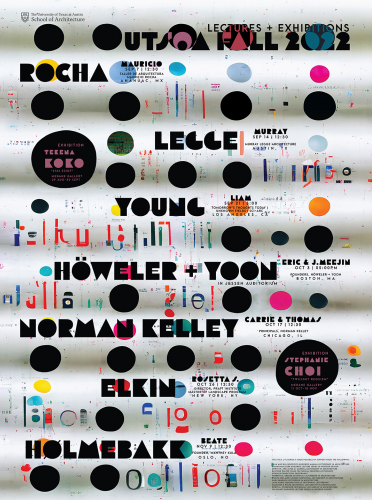 The series launched last week with a talk by Mauricio Rocha on process, and is set to continue through November. Featured speakers include architects, landscape architects, filmmakers, scholars, and designers presenting on a range of topics related to architecture, design, and the built environment.

Learn more about the series below via descriptions provided by UT’s School of Architecture.

Murray Legge, FAIA, is a graduate of the Cooper Union School of Architecture in New York City. He is the founder of Murray Legge Architecture, a collaborative architecture studio based in Austin, Texas, and the co-founder of Legge Lewis Legge, an interdisciplinary collaborative based in Austin and New York that focuses on large-scale installations, public art, and civic projects. Mr. Legge’s lecture will focus on his firms’ recent works including houses, schools, and installations—several built in Austin, Texas. As a city, Austin presents a unique context with its combination of rising population, sharply increasing property values, and the early and middle twentieth-century ideals embedded in its residential code. The city is changing fast while remaining resistant to change. These conflicting forces have given rise to a new context.

Liam Young is a designer, director, and BAFTA-nominated producer who operates in the spaces between design, fiction, and futures. Described by the BBC as “the man designing our futures,” his visionary films and speculative worlds are both extraordinary images of tomorrow and urgent examinations of the environmental questions facing us today. In his lecture, Mr. Young will take us on a science fiction safari through an imaginary city for the entire population of the earth, where ten billion people surrender the rest of the world to a global-scaled wilderness and the return of stolen lands. Set against the consistent failure of nation states to act in any meaningful way against climate change, “Planet City” emerges from a global citizen consensus, a voluntary and multi-generational retreat from our vast network of cities and entangled supply chains into one hyper-dense metropolis.

The acronym VIF, or verify in field, is a notational convention on architectural drawings, alerting the builder that conditions in the field may differ from what appears on the drawings and that further verification is necessary. The notation acknowledges the contingencies of construction and the limits of architectural representation. It also speaks volumes about disciplinary questions considering the scope and authority of drawings and the interactions necessary between concept and construction. At Höweler + Yoon, we use the terms “verification” and “field” to illuminate the design processes that we undertake in our work at different scales, from the detail to the urban scale. This lecture will present a range of projects using Verify in Field as a lens to understand the work and how it fits into a broader cultural context.

Norman Kelly was founded in 2012 by Thomas Kelley and Carrie Norman. The architecture practice is based in Chicago and Cambridge and works in the fields of residential architecture, commercial interiors, furniture design, exhibition design, and design criticism. Previous clients include Aesop, the Noguchi Museum, the Museum of Contemporary Art Chicago, Graham Foundation, Notre, and the artist Brendan Fernandes. In addition to their professional practice, Thomas Kelley is currently an associate professor at the University of Illinois at Chicago and Carrie Norman is an assistant professor at MIT. In their lecture, “The Little Things,” Norman and Kelley will present a selection of the firm’s recently completed interiors and furniture pieces.

As a designer and a scholar, Ms. Elkin’s work aims to elevate the role of plants in human life by exploring the concealed characteristics of non-human behavior. Her work experiments with the ways in which we compose our worlds, blurring the traditional boundaries between research and practice. Drawing on a decade of multidisciplinary research, Ms. Elkin’s lecture will address the scalar ambitions of landscape architecture by unpacking the rise of tree-planting campaigns, as described in her recent publication Plant Life: The Entangled Politics of Afforestation. By exposing the human tendency to fix or solve environmental matters by exploiting other organisms, the work reexamines the relationship between human and plant life, revealing that afforestation is not an ecological act; rather, it is deliberately political and distressingly social.

Beate Hølmebakk is a professor at the Institute of Architecture at the Oslo School of Architecture and Design (AHO) where she is responsible for TAP–The Architectural Project that runs two master studios in building design: Building in Landscape and Building in Life. Hølmebakk’s teaching focuses on conceptual clarity, structural logic, and architectural form. Together with Per Tamsen she is the founder of Manthey Kula, an internationally recognized office working between architecture, landscape architecture, and art. The office was nominated for the Mies van der Rohe Award in 2009, 2011, 2019, and 2022 and has been represented in several international architecture collections, biennales, and exhibitions. Hølmebakk received her architectural education from AHO and The Cooper Union in New York. She has been professor at the Chalmers University of Technology and guest professor at Universidad de Navarra and Cornell University.