“Beauty and Ritual: Judaica from the Jewish Museum, New York” at the Museum of Fine Arts, Houston 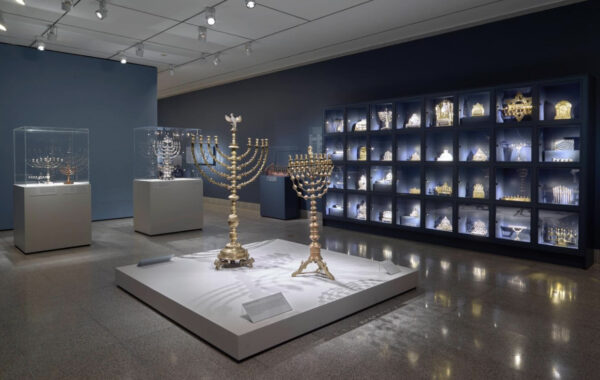 Beauty and Ritual: Judaica from the Jewish Museum, New York, at the Museum of Fine Arts, Houston, is a rare experience for the city. I don’t recall any time I have seen as many items relating to Jewish religious or spiritual experience in one place, especially in an arts space. Personally, I am interested in reviewing the exhibition because my current larger research project focuses on Jewish identity — although removed from Judaica — and my desire to consider the MFAH exhibition in relation to my own Jewish identity. My own relationship to Judaism informs my experience in the exhibition. What lingers throughout the show is the idea that there is no unified Jewish identity then, now, historically, globally, and contemporaneously (and I’m grateful to a friend, Talya Sokoll, for talking this idea through with me). My relationship to Judaism — religiously and/or secularly — is not the same as the relationship others have — it is different from that of my parents, and different from other Jews.

As the exhibition title states, most of the works on display are rooted in ritual use. The objects range from antiquity to contemporary and cover a global Jewish experience. The introductory wall text references both the works’ “remarkable survival” against a history of anti-Semitism and violence, while contemporary works in the exhibition represent “vibrant communities…[that] continued to thrive.” The attempt to negotiate, represent, and assert the contemporary lived experience permeates throughout the exhibition, and sometimes is made visible, though other times it’s unclear.

The exhibition space is divided into three rooms: “The Art of the Synagogue: Adorning the Torah,” “A Day of Rest: The Radiance of the Sabbath,” and “Beyond the Synagogue and the Home: The Light of the Hanukkah Menorah.” The Torah and Sabbath rooms include objects meant for weekly (and daily) ritual use, while Hanukkah celebrates the Maccabee’s victory, an eight-day annual festival. Since these items are meant to be used, they were never intended to be displayed in a museum, although there are exceptions. Where they originally belonged seems to no longer exist. Some wall labels state this, others do not, yet there is the constant knowledge that these objects are part of the collection of the Jewish Museum in New York City, and are away from their origins of ritual use. Loss appears tangible within the exhibition, as pogroms, expulsion, persecution, and the Holocaust are stated and unstated. Not every work is touched by tragedy, but at times there lacks clarity about which ones are. 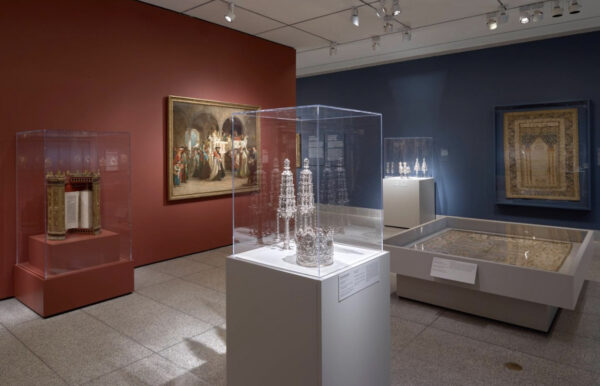 “The Art of the Synagogue” is where one first enters the exhibition. In the center, as you walk into the space, sits a Torah crown from 1969, an assertion of a more recent experience that greets the visitor. The space is filled with Torahs, Torah covers, pointers, crowns, shields, and an ark. While a necessity of exhibition, the Plexiglas-covered open Torahs, without their rabbi or cantor, felt like specimens.

One elegant connection between past and more recent history is made in a row of hanging Torah shields where geometric forms and clean lines of a midcentury modern Torah shield, which was made in New York City by Ludwig Yehuda Wolpert and Chava Wolpert Richard in 1960 (with Bauhaus influence via Wolpert’s training), hangs near another Torah shield that dates to 1669 Germany, which exhibits a similar simplicity of form and emphasis on text. The 1960 piece, influenced by the artist’s Bauhaus training, features a grid of bright, different color stone squares in its center, with a bright blue background. Silver Hebrew text creates a circular form to the shield. The 1669 shield is a silver rectangle, with a smaller silver rectangle in its center. Hebrew text covers the shield and an emphasis on Hebrew letters suggests a spare, yet elegant, modern sensibility when placed near the much later shield. The 1669 piece is one of the earliest surviving examples of a Torah shield, per its didactic wall label. A variety of Torah pointers — used to prevent human touch on sacred documents while reading from the Torah — also illustrate the intention of combining historical objects with more contemporary ones, and span more than a century in their creation.

The exhibition organizers connect and challenge historical gendered norms of Judaism, using contemporary work by woman artists to question gender separations, which vary in contemporary practices depending upon one’s domination. For example, the Torah binder, the cloth that holds the Torah in place when it is not in use, is traditionally made by women, and relates to gendered expectations of woman’s work via craft and fiber arts. Once again, historical objects are paired with contemporary examples meant to critique such associations. In the gallery titled “A Day of Rest,” gender roles are reconsidered most clearly, but perhaps also most emptily. For example, the challah covers (hallah used in the exhibition) repeat the norms of women’s work in the home with textiles, in addition to the expectation that the woman of the household prepares the home for Sabbath, including the Sabbath meal. Here, Yifat Na’im’s work Hallah as Metaphor (1997), as the wall label states, makes “an evocative statement about women’s roles in Jewish practice,” with fabric as revealing and binding the body of the hallah. However, the objects used to make this point (a work not meant for the Sabbath ritual) did not fully register as a critique, and the piece is reliant on the wall text for clarification.

In the same room, the work that resonated most with me was related to the Sabbath tradition of Havdalah, the tradition with which I have the least personal experience. Mierle Laderman Ukeles and Steven N. Handel’s “I’m Talking to You”: A Scent Garden: Three Different Voices from Nature, Version II (2009) is a contemporary work that responds to this Sabbath ritual, which ends Shabbat, and, in part, uses smelling spices. Ukeles, working with Handel, an ecologist, does not include a traditional spice container, of which there are beautiful, traditional examples on display. Instead, they display different kinds of scientific dishes holding different spices, herbs, and flowers. Included with the work is a diagram of which aroma is in each dish. Enclosed in plexiglas, the cube is open on top, inviting viewer to smell. The aromas are intoxicating, even through a mask, and activate pleasure — of smell, of nature, and of the conclusion of a day of rest and reflection. 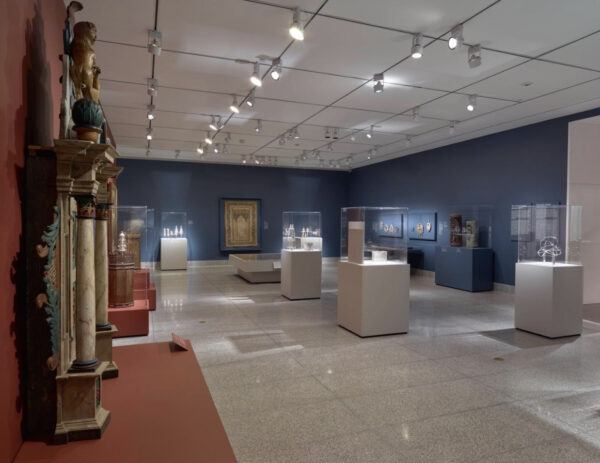 The Hanukkah menorah space feels, at first, a bit like joy. Surrounded by so many menorahs, beaming in and reflecting the light, it is easy to remember one’s own past Hanukkahs (a minor, but joyful holiday). Hanukkah celebrates survival and the miracle of one night’s supply of oil lasting for eight. It was educational to see the expanse of menorahs over time, paired with a globe on the left wall. It was also enjoyable to see the menorahs lit by past presidents in the White House, and by Second Gentleman Douglas Emhoff.

Also included, in the corner of the room, was a menorah that my memory keeps returning to. It is a menorah made in secret by Arnold Zadikow and Leopold Hecht in 1942, while they were imprisoned at the Nazi concentration camp Terezín (Theresienstadt) in what was then Czechoslovakia. Hecht stole the wood and Zadikow made the menorah for the boys’ residence so that they could celebrate Hanukkah and continue their Jewish education in secret. Zadikow died in the concentration camp, Hecht survived, and the menorah was found hidden after the war. The piece shows its use. The wood is scratched and has evidence of candle wax.

The menorah is one of the objects in the exhibition whose presence is most clearly delineated or stated as one marked by tragedy and trauma; the menorah, in its description, makes the staggering loss of the Holocaust visible. Its presence, in a room of joy for a holiday where children play games and receive presents, makes absence and loss tangible while also evoking tenets of Judaism to remember — emphasizing education of Jewish history and Jewish ritual, and the idea of maintaining tradition. There are other moments of loss, such as works from the city of Danzig, Germany, which are in the collection of the Jewish Museum because Jewish leaders realized in 1939 that they would be destroyed and desecrated if they remained in Germany during the war.

The exhibition attempts to assert the continued vibrancy of Jewish ritual, of a lived Jewish experience that includes celebration and beauty, in addition to a tragic history of secret rituals and celebrations, sanctioned hatred, violence, and expulsion. Ukeles and Handel’s sculpture best argues this vibrancy, as A Scent Garden depends upon the action of the viewer to activate their own senses and make a bodily connection to the work for the full experience. The act of smelling in A Scent Garden is also safely removed from being a co-op of ritual or stage acting of Jewish ritual.

There was recognition and representation of Jewish rituals in this show, which are unlikely to be on display in most non-Jewish-focused museums covering the same historical periods. While writing this review, I grappled with the ways haunting loss and tragedy imbued my experience of the exhibition and my own contemporary Jewish identity. Finding the joy, the celebration, and perhaps even the ritual, may be a centering action, one that Ukeles and Hander’s work helps to instigate. The exhibition is the first in a series, which will culminate in a space in the MFAH dedicated to Judaica in 2023. Named the Albert and Ethel Herzstein Gallery for Judaica, this gallery will continue to exhibit works on loan from the Jewish Museum, New York. 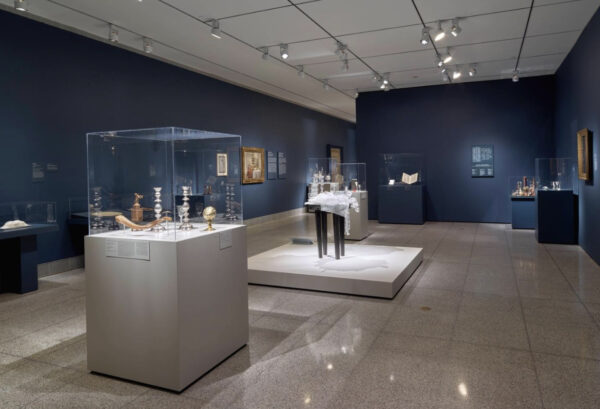