At the end of 2020, Bill and Pam Campbell, founders of William Campbell Gallery in Fort Worth, announced their retirement. The gallery then shifted in ownership to the Fort Worth Contemporary Art Partners (FWCAP), a corporation formed by Jadz Pate, Clayton Snodgrass, Tim Locke, J.W. Wilson, and Peeler Howell. Throughout the Campbell’s time as owners, the gallery changed over the years. Established in 1974 as Gallery One and Frames in a strip center on Camp Bowie Boulevard, the business started as a framing company and exhibition space under one roof. In 1981, the couple bought a commercial space in a former residential neighborhood and moved the gallery portion of the business into that space. At this time, the gallery was renamed William Campbell Gallery.

Last fall, FWCAP announced the opening of a secondary gallery location, three miles east of the longtime space and closer to downtown. Located in a quickly changing warehouse district, the new space offers the gallery a chance to show large-scale works that wouldn’t physically fit inside its Byers Street location, which is limited by its 7-foot 10-inch ceilings and residential-sized doorways.

The exhibition brings together Thompson’s work from the 1990s, which mostly focus on vessels, floral arrangements, bugs, and fish, and the 2000s, which includes depictions of homes set in the American West. The overarching style that connects Thompson’s very different series is his use of vibrant colors, simplified geometric and organic shapes, and delineated planes of space. 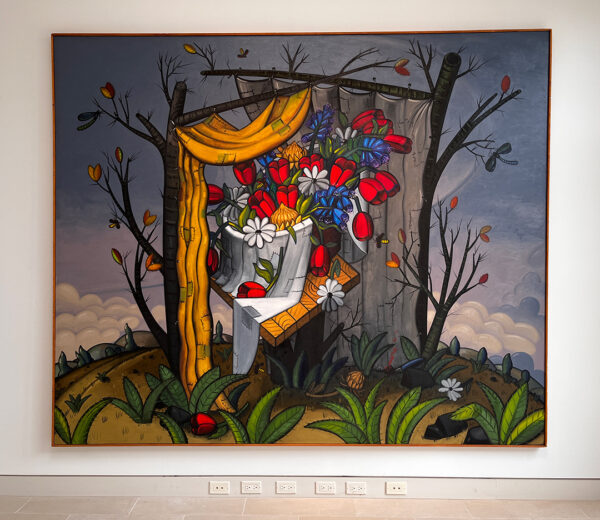 Pieces like Basket of Flowers remind me of Texas regional artists; this work in particular is like a mash-up of Otis Dozier’s social realism and Valton Tyler’s surrealist forms. Both styles are known for their subtle palettes, but Thompson combines the visual languages of each and adds an unexpected layer of vivid colors that give the works a dream-like quality.

Though generally smaller than the works from the ‘90s, I was drawn more to Thompson’s landscape paintings from the 2010s. Perhaps it is my native-Texan nature that feels an affinity with lonely homes sporadically placed along the wide-open land, or my personal interest in depictions of homes, but these pieces made me want to linger. 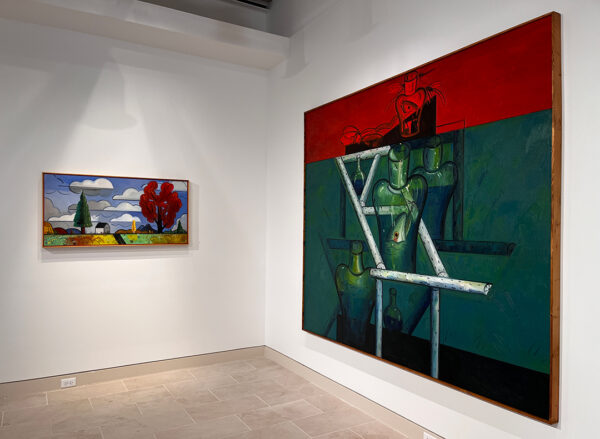 In my close-looking, I saw connections between works like Red Tree and Horizon/Heat, painted 17 years apart. Both have strong divisions of space, Red Tree with the thick black line of the horizon separating sky and land, and Horizon/Heat with the use of two canvases joined together and treated with different color palettes (monochromatic red on the smaller upper canvas, and mostly green on the lower portion). Both works also feature a strong diagonal: in Red Tree this comes in the form of a road, and in Horizon/Heat, the diagonal shape is formed through a contraption made of thin, white pieces of wood. 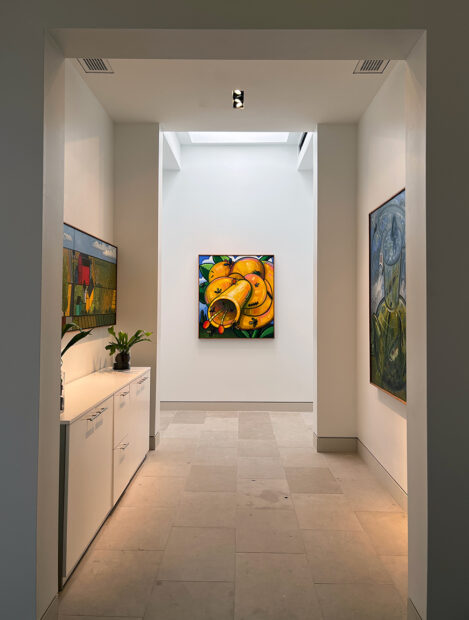 Though Thompson was born in Dayton, Oregon and returned to his hometown in 2011, he spent roughly fifteen years in Texas and his artistic practice reflects a strong Texas influence. Reflecting Pools is a beautiful show of works that span three decades of Thompson’s career, including his last years in Texas as a professor at the University of Texas at Austin. The work pops in William Campbell Gallery’s new location, where the viewer has the space to step back and take in the grandeur of large-scale works and consider the connectivity between pieces the artist painted decades apart.

I want a copy of this I love it