Last month, my colleague William Sarradet and I embarked on a five-day tour of the Texas Panhandle. We visited museums and galleries, talked with arts workers and artists, and learned a little more about the thriving art scenes just west of North Texas. The trip began with a visit to the Old Jail Art Center (OJAC) in Albany. 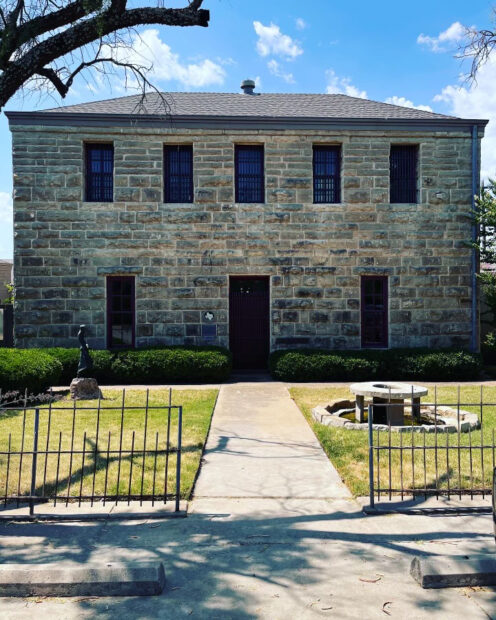 As its name suggests, the OJAC is housed in an old jail built in 1878. It is a two-story limestone building with a simple facade featuring one door flanked by two windows on the bottom floor, and five windows across the second floor. The main entrance is to the left of the building through the The Marshall R. Young Sculpture Courtyard.

Though each of the four exhibitions currently on view (including Colette Copeland: My Jesse James Adventure) were strong, the one that stuck with me the most was Technicolor Summer, which was comprised of works from the OJAC’s holdings. It is easy for permanent collection shows to be underwhelming or feel less cohesive than traveling exhibitions or solo shows. Technicolor Summer, however, succeeded at uniting a variety of pieces while capturing a vibrant, playful mood that resonated with me as I ventured out in the Texas heat. The lively color palette of the works set the perfect tone for the start of a summer road trip. 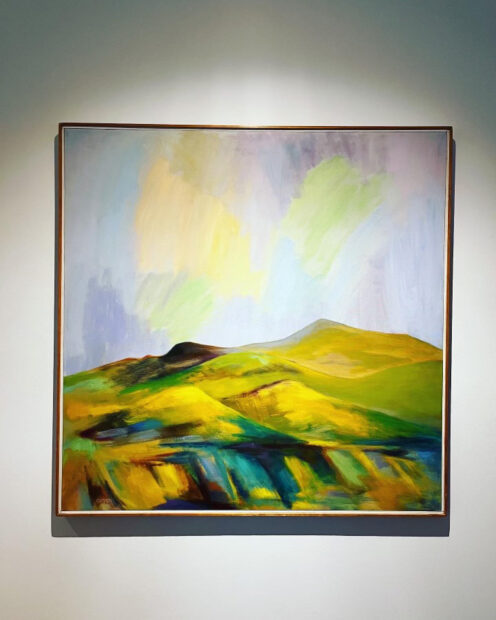 Dreamlike, airy landscapes like The Ridge by Louise Ganthiers provided restful moments, while works like A Letter to My Father by Samuel Taylor employed the same visual language to create a nosier scene. While both pieces use an array of cool yet vibrant colors paired with painterly brushstrokes, Taylor’s repetitious, short, diagonal strokes suggest a sense of urgency. 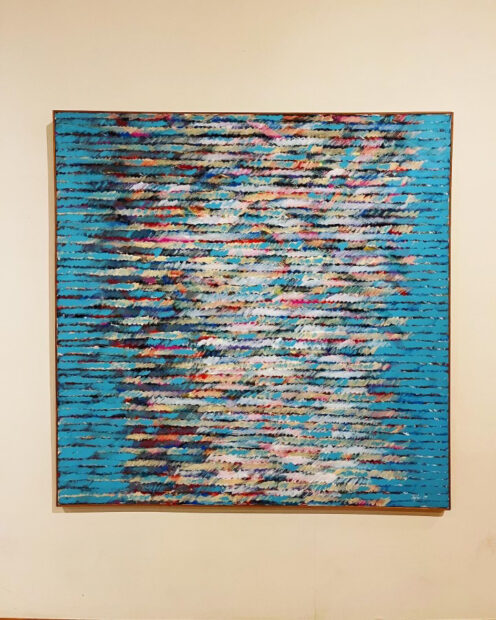 Samuel Taylor, “A Letter to My Father,” 1979, acrylic on canvas. Gift of the artist.

The other works I spent a fair amount of time with were all figurative. Smiling Monster by René Treviño immediately appealed to me because of its clear reference to pre-Columbian iconography. As a Mexican American, I often consider the history and representation of my culture, especially in art spaces. Treviño uses Mayan and Mesoamerican imagery as a starting place for some of his work, and then transforms it through a contemporary color palette. His addition of gold leaf and rhinestones, however subtle, is a reference to queer aesthetics (which is not a defined or monolithic style, but rather a spectrum that alludes to alternative fashions that have originated in queer communities). The piece also has a graphic, print-like quality to it through the artist’s use of bold, fluid black outlines and flat areas of paint. Treviño’s choices bring a light-hearted feeling to imagery that might otherwise come across as stoic if viewed in a typical, historical context. 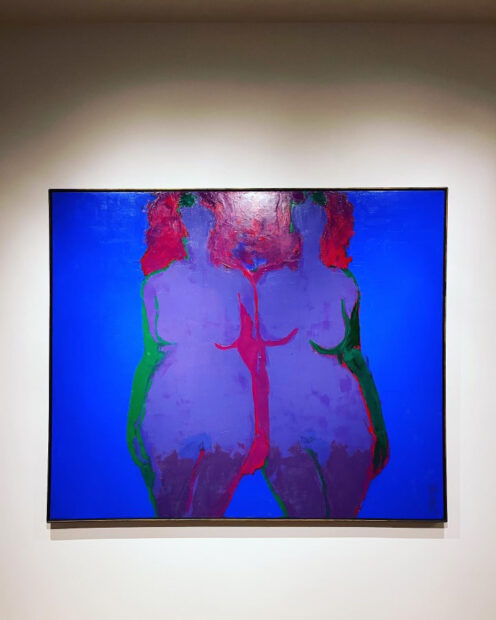 Wesley Rusnell’s Two Violet Nudes also makes use of outlines and flat application of color, but his added use of texture gives a slight dimensionality. Rusnell strikes a balance between blotchy brushwork and flat areas, making what could be an overly simplistic composition immensely more satisfying to examine. For a painting that feels so squarely in line with the pop art movement, because of its color and repetition, the use of texture is slightly unexpected and helps remind the viewer of the artist’s hand. Though the blue background is applied fairly flat compared to the silhouetted purple figures, I found it to be equally compelling. The shade of blue reverberates against the purple, green, and red used in the figures, and its flatness is enticing, like the unknown depths of the ocean. 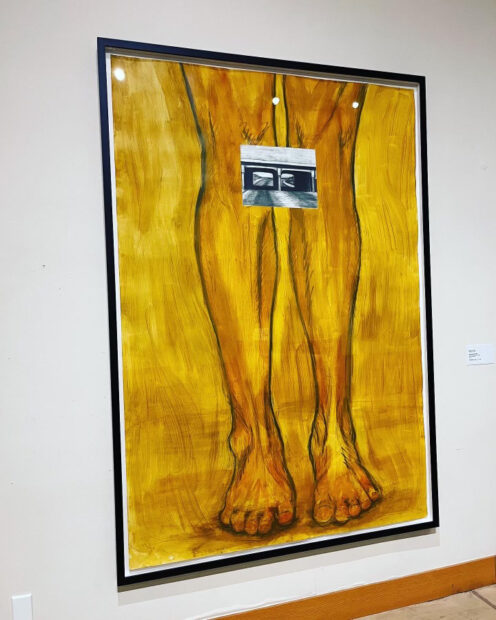 My favorite piece from the exhibition, and the one I spent the most time with, was Standing Plans by David A. Cook. Like Rusnell’s nudes, it has a simplicity to its overall composition and employs negative space, but beyond that I was intrigued by the scale of both the work itself (it is the largest piece on view in Technicolor Summer) and the scale of the subjects in the work: larger-than-life legs and the tiny image of a highway overpass. Putting the human form on such a grand scale and in conversation with a human-made structure (that in real life would be much larger) places an importance on the figure over the structure. For me, the juxtaposition brought to mind the strength of a body when its feet are planted firmly. I also couldn’t help but reflect on the permanence of the things that we, as people, create, compared to the ephemerality of our lives and bodies.

And though that heavy thought remains with me, the piece, like others in this exhibition, maintains a playful sensibility. The placement of the round-edged openings of the underpass directly atop the kneecaps of the legs is humorous. The visual comparison of the feet and legs as a structural component, like that of the bridge beams, is a fun, childlike perspective that  we, as adults, in our busy day-to-day lives, may not take the time to revel in.

Through the seemingly simple overarching concept of vivid colors, the OJAC has brought together a diverse collection of pieces that emanate the feel of this sun-drenched season, with a touch of whimsy. As summer comes to a close, plan a trip to Albany (or plan to drive through on your summer road trip) to see Technicolor Summer before it closes on August 20, 2022.

The Horse as Witness and Metaphor: A Chat...

Here’s a Fun Game Where We Texans Bat...

The Old Jail Art Center is one of the top Texas treasures of a museum out there!! Their exhibits are always worth a travel through!!