A Shared Conversation: Art & Language at the Grace Museum, Abilene 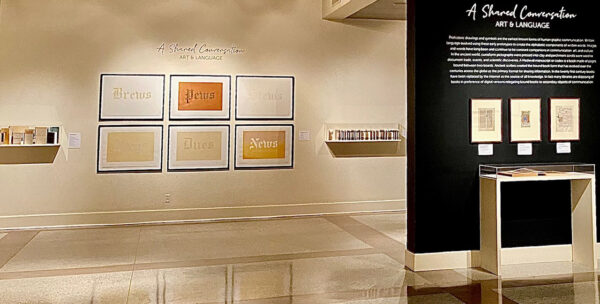 While perusing the Grace’s vast collection, curator Judy Deaton discovered many hidden gems, including 13th century illuminated manuscript pages and many artist books and portfolios that had neither previously been shown nor literally seen the light of day. Currently on display at the museum are more than five exhibitions, which together utilize collection works and loans to explore the connection between images and words. The works included span many eras, incorporating diversity in form, process, concept, and intent; they fuse symbols, imagery, and language to create conversations.

Artist Cara Barer transforms books into works of art by sculpting them into new forms, dying them, and photographing the final objects. Her photographic series entitled Obsolescence addresses the displacement of books via the digital universe, as well as the relationship with the material to nature and its fragility. The works serve as an archive, documenting the books before the paper becomes brittle and disintegrates. The organic shapes in the works Mighty and Midnight reference sea creatures. Mighty’s periwinkle color reminds me of a sea anemone, while Midnight’s lack of color makes me think about a dying ocean reef. The unusual vantage points, as well as the stark white and black backgrounds, anthropomorphize the books into living, breathing entities. 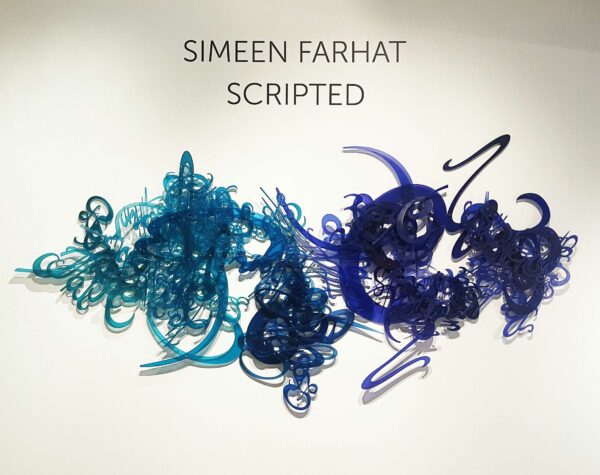 In her installation Scripted, Simeen Farhat’s works draw from the Arabic languages and poems by famous Farsi and Urdu poets, who wrote about freedom of speech and thought. Inspired by her Pakistani heritage, as well as women’s rights, Farhat deconstructs the words, reshaping and reconfiguring letters to create beautiful, stylized sculptures emphasizing the positive and negative space within the forms. There is a dynamic, chaotic energy that radiates from the works. The fact that few words are legible suggests contradictory meanings and interpretations of texts, as well as a hopeful message of interconnection between cultures and languages. The titles give clues as to the meaning and message of each work. For example, My Voice is Shaped by Silence and The Voices of the Few suggest the silencing of women and/or those who lack power. 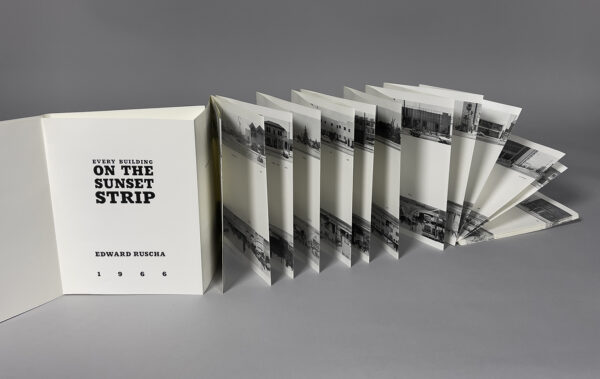 Ed Ruscha, “Every Building on the Sunset Strip,” artist book. Image courtesy of the Grace Museum

The exhibition Ruscha & Roth: The 1960’s Artist Book Revolution features work from the museum’s permanent collection. Artists during this time period incorporated DIY everyday materials and inexpensive processes to produce artist books. I love the subversive humor in Ruscha’s books. He used the book format to document his quirky and often banal performances, such as eating crackers in bed, throwing a typewriter out of the window, and an up-and-down journey recording every building on L.A.’s Sunset Strip. The accordion book format is an effective structure, not only to communicate the circular narrative, but also as a sculptural form.

Other limited editioned artist books from the museum’s permanent collection combine artists and authors, including Oskar Kokoschka’s lithographs of Shakespeare’s King Lear and Ronald King’s lithographs of Shakespeare’s Anthony and Cleopatra. The intricately produced and often unique artist books in the exhibition are meticulously crafted and beautiful in form. It is hard to imagine that they were meant to be touched and held.

On the 2nd floor of the Grace is a small gallery dedicated to contemporary art from the permanent collection, which currently features art that incorporates language. I was particularly moved by Linda Ridgway’s neon sign, entitled Missing. The letters spell “conversation conversation” in both Ridgway and artist Harry Geffert’s handwriting. Geffert died in 2017, and this is a poignant homage to their relationship, symbolizing love and loss. 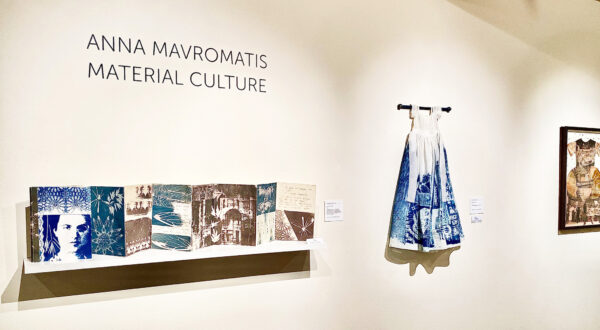 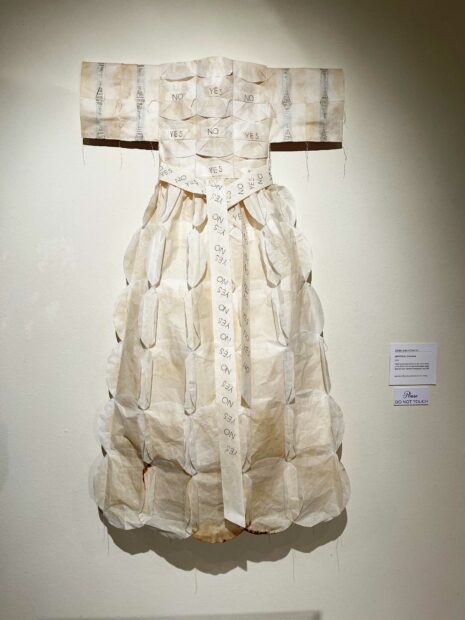 My favorite works on display are from the exhibit Anna Mavromatis: Material Culture. The artist combines a variety of printmaking processes, as well as clothing and textile design to tell stories from her life and her Greek heritage. Mavromatis received a BA from the London College of Fashion, and her innovative design skills are evident in her work. Perpetual Dilemma is a child-sized dress constructed from used coffee filters and vintage book pages. The words “yes” and “no” are hand-stamped on the bodice and ribbon, referencing the conflicting messages that young girls receive on how to act and be in the world. Mavromatis spent many hours speaking with family members over coffee, so the stained coffee filters serve to document their family time, as well as how one “filters” and embodies both helpful and harmful messages. Another dress work, entitled Early Lessons, is a baby’s christening gown with cyanotype images and texts printed on the bodice of the gown. The words “Fight Like A Girl” appear below an image of Gloria Steinem surrounded by Greek statuary details and symbols. The Christian symbolism of a christening is the blessing an infant to prepare them for the world. In this way, the words of feminists are preparing this child to be heard and seen, and to claim their power. 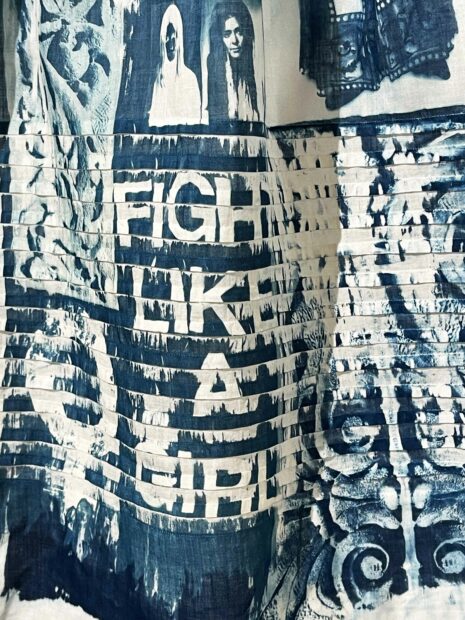 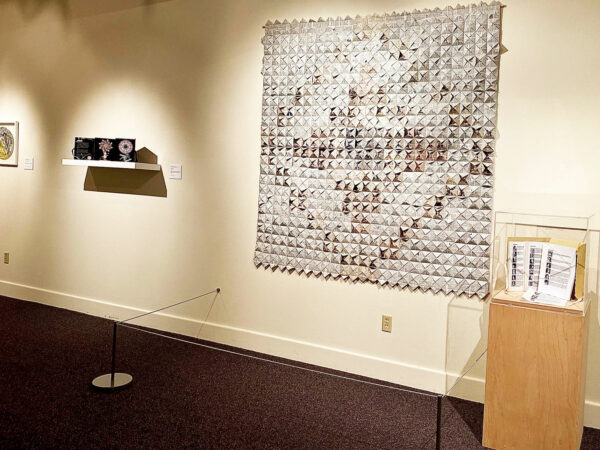 Hidden Figures is a sight to behold. From a distance, the work resembles a quilt. Upon closer inspection, it reveals 576 portraits of women scientists, authors, artists and activists which have been cut from an old dictionary, folded, dyed, and stitched into a six-foot square. The portraits are set inside folded paper, which reminds me of the childhood paper game called fortune-teller or cootie catcher. Obscuring the women’s faces references the often-overlooked contributions of women throughout history. The “cootie catcher” name also reinforces the negative messages young girls receive that they are not good enough or important enough. 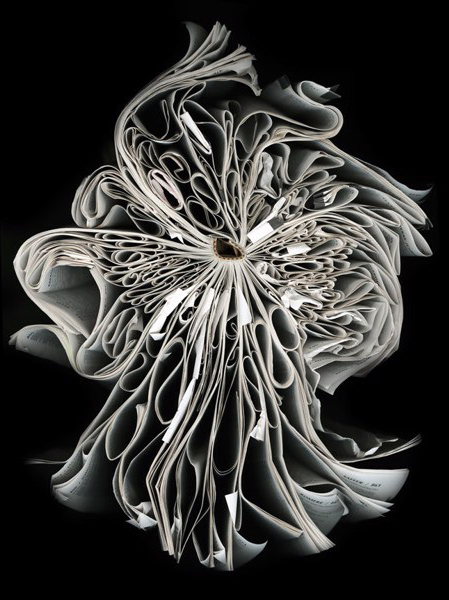 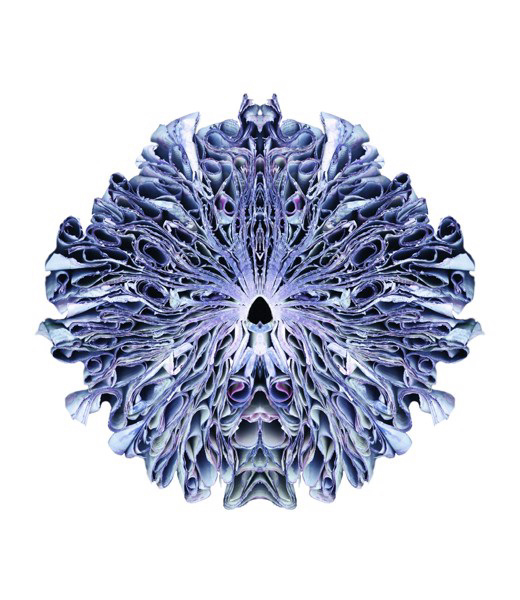 Together, the exhibits at the Grace raise a critical question surrounding the importance of books as physical objects. The longtime idea that books are the definitive receptacle of knowledge is now outmoded, as our reliance on technology for reading and learning continues to grow. A 2010 interview on CNN with author Nicholas Negroponte predicted that physical books would be obsolete within 5 years. Even though that has not happened yet, I have noticed on my teaching campuses that while students use the library to study, few check out physical books. While books may eventually lose their utilitarian function and physical presence, artists will continue to construct and deconstruct books, as well as language, in their artistic practice, creating new dialogues and meaning.

These five exhibitions are all on view through September 17, 2022. The Grace Museum’s history galleries also feature both permanent and rotating exhibitions related to the history of Abilene and West Texas. The museum is located at 102 Cypress Street in Abilene and is open Tuesday through Saturday from 10 am to 5 pm.

Language as Gesture: An Interview with Simeen Farhat

Thank you for your hard work to collect these beautiful pieces of art and for displaying them for everyone to enjoy.