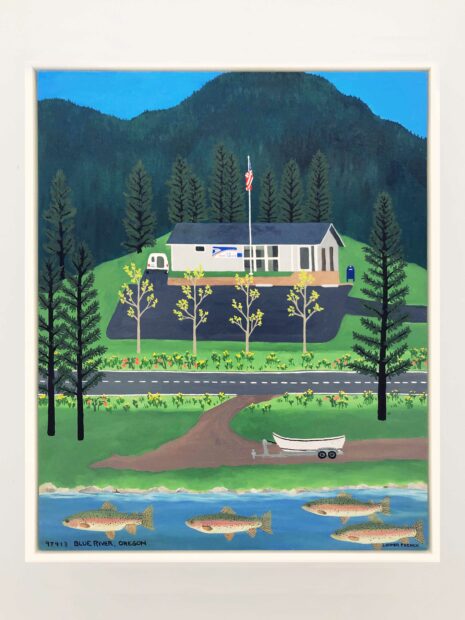 At Various Small Fires, Jessie Homer French’s intimate paintings hang like jewels, invoking the beauty and ruin of our current moment. The gallery’s downtown Dallas location is sterile: a sparkling white box lacking distractions. There are no windows, save the glass door (the front windows are covered by a false wall to create more hanging space), and the reception desk is out of sight, tucked away into a nook on the back wall. But the sterile space lets the paintings shine, and the longer you look, the more unsettling they become.

The nine paintings are small, at roughly one-and-half by two feet, and two by two-and-a-half feet. French’s worldview peers out from the windows of the canvases: the paintings of post offices and mailboxes assert her preference for letters over text or email, and the repetition of animals and trees highlights her choice to live in the rural West. The works share an even application of paint, with every inch of canvas receiving similar attention and treatment, giving them a clean and direct quality. They are pristine, even romantic. And yet, the scenes can be spoiled at a moment’s notice, it seems. The collective anxieties of the present — the climate crisis, the precarity of a world beset by a global pandemic — ripple below the surface. 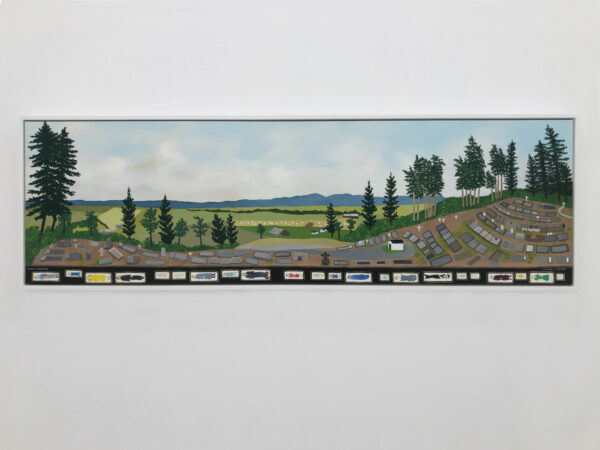 The USPS paintings comprise the thematic focus of the show. Three paintings depict rural post offices French has frequented, located in California and Oregon, while a fourth shows the Winter Harbor, Maine post office used by her best friend, June. In each, the post office sits near the center of the frame: usually a squat, windowed building with a low-lying roof, and always with the accompanying American flag, hanging limply or barely billowing. A big square blue mailbox beckons in most. None of these paintings show humans, though we see their industry — post offices, obviously — but also boats and trucks. And in all of the works, we see the natural world that surrounds the buildings, including the trees and grass and animals, all appearing strangely still even as they move.

In On Hwy 126, Oregon, a panting black dog with a windblown orange scarf seems frozen, as though she’s paused mid-movement to allow the painter to render her. Same with the bushy striped cat walking in the foreground of June’s Post Office, who peers out at the viewer. Even the rainbow trout that form a band along the bottom edge of 97413 Blue River, Oregon don’t appear to swim as much as hover in the river. Everything is frontal and direct, and in the world of the paintings, it could be 1962 or 2022 (save for the license plate on the pickup in Mountain Center, California 92561, which locates the painting in at least 2011). These works exist in indeterminate time, and seem to suggest that, yes, there are still places one can go that feel untouched by the present, at least on the surface. You can still resist the immediacy of technological communication and mail a letter to a friend. You can still find places where human industry and the natural world coexist. 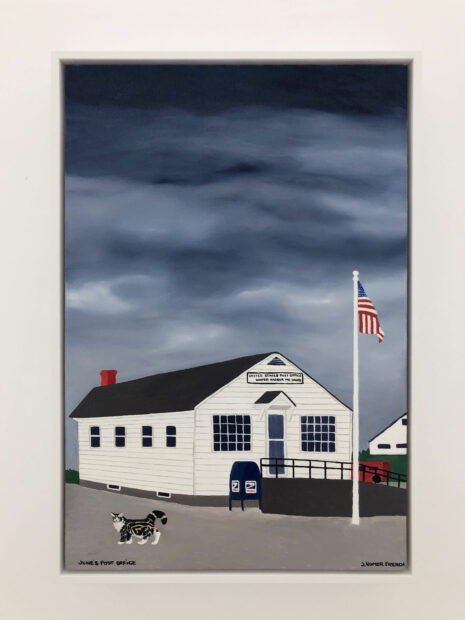 We know this isn’t quite true, though; the present is, in fact, inescapable. The USPS might not get your letter to your friend for weeks, and it will cost you 22% more to mail than it did five and half years ago, thanks to chronic underfunding and a Postmaster General whose cost-cutting measures have further hamstrung and politicized the nation’s mail service. Even the idyllic composition of 97413 Blue River, Oregon, where the post office is surrounded by jewel-green grass and viewed from the McKenzie River below, obscures a tragedy of the present. Only the sky, which is the kind of oppressive blue of high summer, feels ominous. And it should. In September of 2020, during a record wildfire season in Oregon, the Holiday Farm Fire ripped through the McKenzie River Valley and destroyed most of the town of Blue River, including the depicted USPS branch. The post office reopened in May of 2021, the same year French completed the painting. Though the town is rebuilding, and the Oregon Department of Fish and Wildlife has resumed stocking the river with trout, this painting is clearly a commemoration of before-times: the grass is green, the flowers are blooming, and the conifer forest in the background is thick and healthy. 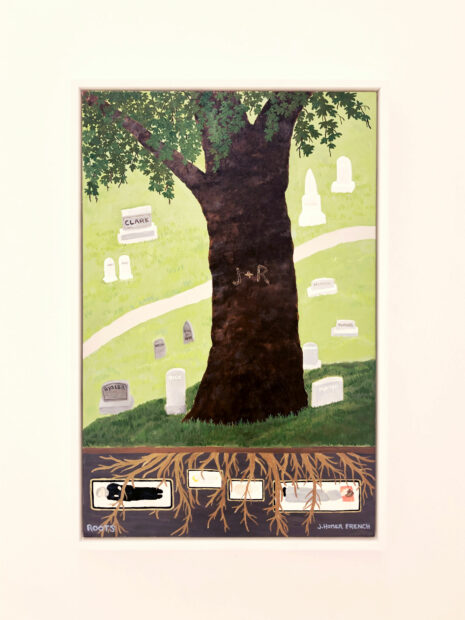 Farm Country, too, is peaceful on the surface. It is the largest painting in the show, at five feet long, and portrays fields of green dotted with barns and bundles of crops, large, diffusing clouds over low lying mountains, and tall trees delineating the foreground from the background. The foreground is a cemetery: a patch of deforested land dotted with crosses, tombstones, and surface-level vaults. Below ground, lining the bottom edge of the painting, rest the dead in their coffins. We look at them from above, as though the earth has been crosscut to reveal the strata of the buried. They look peaceful, like they are sleeping, their clothing still bright and their skin still luminous, and in one work, a small dog or bunny rests at the feet of a man with a gray beard. Despite the fresh aspect of the dead, this painting too seems to show an earlier time: there are too many deceased children and babies, and the clothing is too old to be current. And yet, this painting, too, hints at the climate crisis. Will the dead be afforded peace, or will a hurricane unearth their caskets, crack them open, and send the bodies floating, as happened during both Harvey and Katrina? 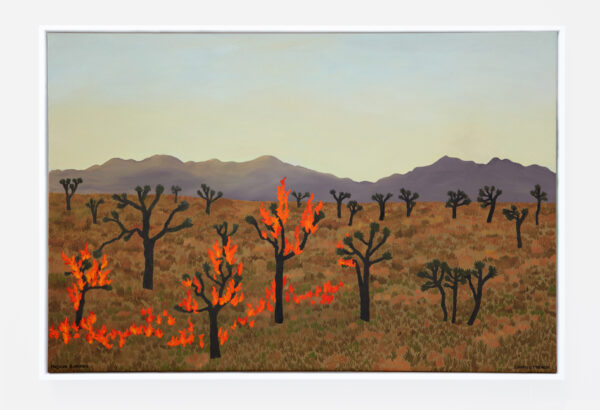 If natural disaster is waiting in the wings of 97413 Blue River, Oregon and Farm Country, in Mojave Burning, the disaster is both spelled out and biblical. The burning bushes of Mojave Burning are the Joshua Trees of the Mojave National Preserve, decimated by wildfire in the 2020 Dome Fire. In the painting, the trees stand among a field of dry brush, and a range of mountains, blue with distance, stand sentinel in the background. Fluorescent orange flames, which mimic the tufts of brush, engulf three trees and begin to ignite a fourth. Though the fire is only just beginning, it’s easy to see the trees and brush stand little chance, which is exactly what came to pass. The Dome Fire began with a lightning strike, during a storm that produced more than fifteen thousand lightning strikes in Central and Northern California. In the painting, we see perhaps an acre or two of the more than forty-three thousand acres that burned as resources were diverted to other fires threatening human population centers. Still, and perhaps strangely, Mojave Burning may be the most beautiful painting in the show.

The paintings are so clean and tidy in their depictions of rural life. But they are more anxiety-provoking for it: because almost nothing in our current world is unspoiled, we know these pristine moments cannot be the full story. There is always something lurking beneath to disturb the tranquility, and though rendered in oil and made to last, we know the scenes are fleeting. We’re left wondering: Is it the past that we’re looking at? Or is it, perhaps, a more hopeful future to come? In the show’s titular painting, Roots, a large tree stretches from top to bottom, gravestones to the left and right and the buried dead below. There is no sky. We are left with the feeling that the cemetery continues indefinitely, and that the tree, already old and carved with French and her late husband’s initials, will stand sentinel forever. Or it will be felled by a wildfire next month, and the buried bodies unearthed by a flood.

Roots is on view at Various Small Fires‘ Dallas location through August 13th, 2022.