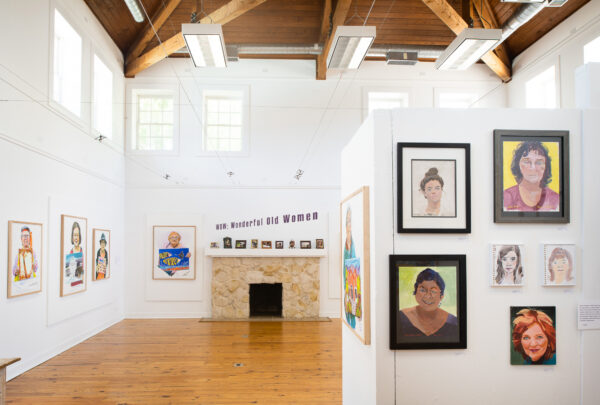 A portrait of Adela Garcia holding her self-portrait hangs next to a framed photograph taken of Garcia while she painted her portrait, her face illuminated in a mirror. It’s a hall of mirror-like effect, a story within a story, bonding the presence of the creator with their creation. Alone in her apartment during the pandemic, artist Gabbe Grodin started painting her students from the images she had taken of them during their art classes as a way to remain close to her subjects and her work.

Grodin teaches painting and portraiture to women at senior centers throughout San Antonio, and she transitioned to teaching online to those of her students willing or able to attend virtual classes.

She has hundreds of photos documenting her students holding their work, which she uses as references to note her students’ progress and strengthen her teaching curriculum.

The larger-than-life portraits of women holding their artwork tell multiple stories: that of the art, the woman holding her art and the story of the portrait itself, a waterfall effect of unfolding visual narratives. Grodin captures her subjects with bright colors and a graphic style. This, combined with their oversized scale, gives the women superhero-like qualities despite their ordinary appearances. Yet this may be the reason they pop. Purple lines highlight brown skin, turquoise highlights pink, and teal green frames an olive skinned face. The painting style reinforces the wonder of knowing others, of generating stories and stories being told. 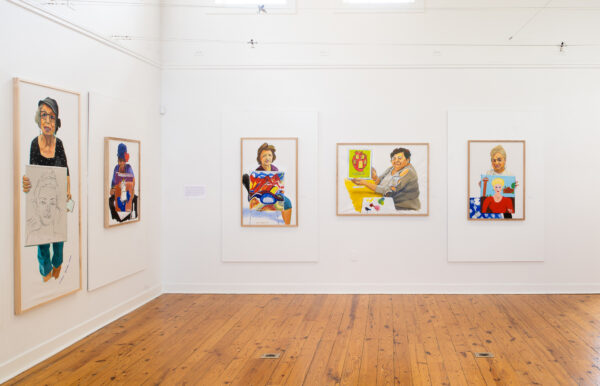 Grodin places both her signature and the signatures of her subjects in prominent spots, boldly writing her own in playful cursive at varying angles and juxtaposing the woman artist’s on her own work. It’s part of her decision to “antagonize” the masculine seriousness of traditional portraiture, but it’s also a statement of the collaborative nature of these images. As an artist with a strength in portraiture, Grodin often teaches her classes by bringing in a mirror and easel and, using herself as a subject, shows her students portraiture skills like skin tone mixing and how to render the portions of the face.

Due to the constraints of her living space, Grodin makes her paintings on unfinished, unstretched canvases. Her bright color palette, set against the raw surfaces, exaggerates her subjects’ silhouettes. Against the white voids, they come alive like subjects in a documentary, or like specimens, except the expressions on their faces are of joyful pride as the force of their various personalities emerges.

As far as her subjects’ age range, some women are newly retired while others are deeply demented. Yet with dementia, image-making is one of the last skills to disappear, so mark-making serves as a healing activity. Grodin was fascinated with one woman’s image of a forest, while another painted the same church over and over.

In one of Grodin’s prompts, she instructs the class to make their own lotería cards. Amada Treviño made Corazón de Condominio, an image of a human heart made into a two-story residence with different illuminated windows, which she invented to describe how a man is able to compartmentalize his heart. 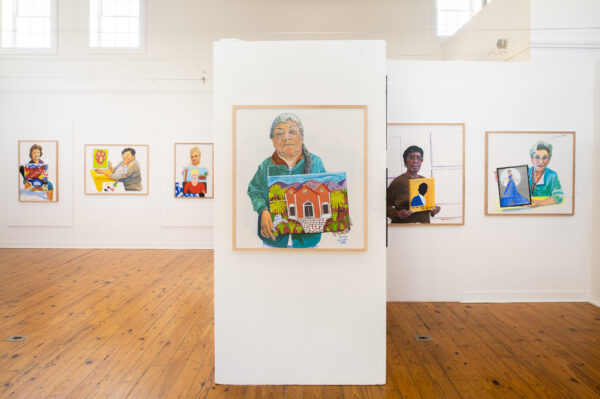 Portraiture reveals the mind of the maker and how they filter their subject. Grodin’s paintings double this fascination. She uses broad, economic strokes in her paintings — details arrive through her blending of color rather than the minutiae of line. This gives her subjects the dimensional power of an avatar, and like an avatar, the graphic nature lessens the age element — crow’s feet and translucent crepe paper skin, all the parts of aging that the cosmetic industry perpetually tries to sell us products to erase.

Like memoir writing, portraiture has been accused of being narcissistic, but in Body Work, Melissa Febos writes a manifesto on the importance of personal narrative, championing “topics of the body, the emotional interior, the domestic, the sexual, and the relational,” critiquing “the false binary between the emotional (female) and the intellectual (male),” and the intention “to subordinate the former.”

Grodin’s show, filled with these women proudly presenting their art to the world, and in turn the artist’s decision to paint them, doesn’t fall for the predictable jargon used for old age and women. It’s a refreshing statement of power.

WOW: Wonderful Old Women is on view at Bihl Haus Arts in San Antonio. A closing Reception is scheduled for July 30 from 2-4 pm.

Thank you Gabby for displaying our artwork. Your positive teaching approach supported our artistic work and made us proud, blessings.