Review: Magali Reus’ “A Sentence in Soil” at the Nasher Sculpture Center, Dallas 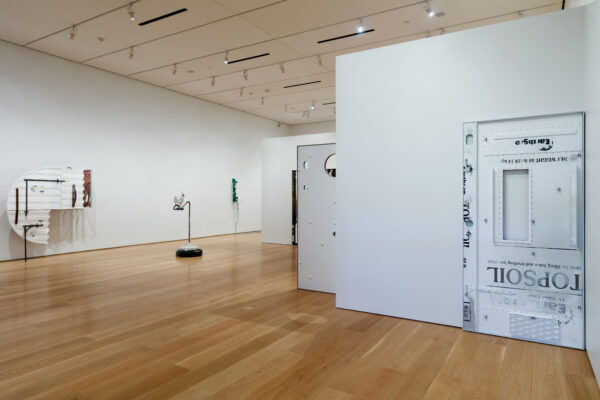 The title of Magali Reus’ current exhibition in Dallas, A Sentence in Soil, points to both language and mute matter. Her sculptural practice lays out some stakes for how those two forces might be leveraged. This summer, the London based artist shares the Nasher Sculpture Center with new work by Lynda Benglis. Their generational and continental differences mark distinct approaches to form and meaning. And Benglis’ continued elaborations of corporeal abstractions set up a nice contrast to Reus, who also explores how bodies relate to spaces and forms.

Reus creates immaculate, highly designed things that are complicated in their beauty and their teleology, mirroring the built environments that most modern, industrialized humans inhabit. As I lurked through the Nasher’s downstairs gallery, I found my mind roaming aimlessly around and between references to known and vaguely familiar types of “man”-made matter. The work for this show falls into three or four different “families” of objects.

First are four works called Beetles that cling to the walls, their ribbed light gray electrical cords looped, coiled, and draped like taffy over cream-colored steel handles. The body of each is built of quarter-inch steel, spot welded into small vertical chassis in John Deere Green, with punch-outs and openings that allow you to peek through and inside, where there gleams a ridiculously large threaded bolt, evidently anchoring the thing to the wall. The non-functional power cords are either bunched and bracketed to the wall in shapes that play with their own cast shadows, or lie noodling on the floor. One Beetle is affixed to the upper left of another wall piece, (Clay (Fiber and Leaf)), the cord knotted around its metal handle, dangling noose-like a foot off the ground.

A second group of four beetles are spread around the gallery posing as yard art. Their titles, Grain of Wind, Apricots, The Greenest Grass, and Hammock, conjure rural settings. These freestanding totems have a weighted base reminiscent of portable basketball goals or patio umbrellas. One base looks like a terra cotta-hued planter sunk into a green vessel with a spout pouring through the base’s built-in handle. Another mimics a white octagonal ceramic pie-lattice bowl set into a round black base with raised tire tread designs. If these descriptions seem stream-of-consciousness, it’s because the work lives in that dreamy, unfixed space. 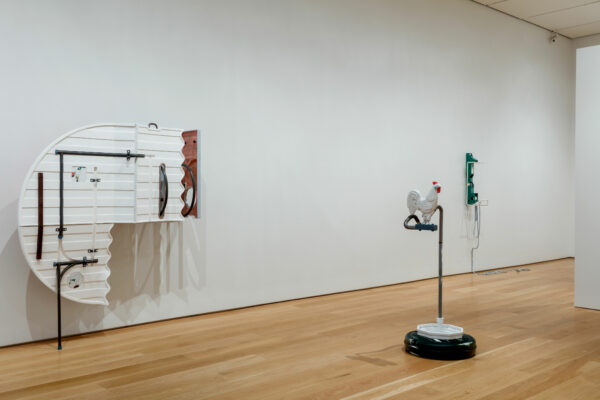 Out of the bases rise space-junk tubing bent up and out and topped with rough cast-iron figures based on antique windmill weights, themselves an interesting synthesis of function, decoration, and branding. Here we have a bison, a pair of roosters, and two crescent moons in navy blue. Their heavy, pocked surfaces are coated in glossy enamel.

Reus employs a laundry list of industrial grade materials and processes. Fiberglass and polyester resin, steel, aluminum, bronze, nylon, and felt all sand casted, powder coated, CNC’d, sprayed, UV printed, laser cut, welded, etc. using the same means of production of the objects and infrastructures that her work poetically simulates. This is somewhere between a Pop and a Surrealist strategy, engaging not only the individual unconscious, but also that shared psychology embodied in all kinds of artifacts and media that make up our realities. 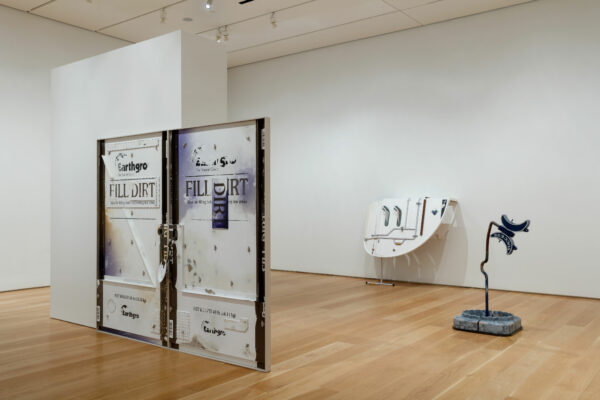 Relating more to the architecture are the works called Clays, large rectangular pieces shaped like doors that stand directly on the floor, flush against a wall, or partially, poking out into the room. Like a door they have two surfaces, which are added to or subtracted from, as in Clay (Mushrooms), a double-door diptych centered in the room on an off-centered freestanding wall, which nearly half of it juts beyond. Their front faces advertise “Fill Dirt,” printed over a topography of angle iron, scraps of diamond plate texture, and myriad fasteners. The generic soil bag used as background for many of these works is shown in full here, white with brown and black no-frills text, brown edging on two sides, and a couple of areas where color corrodes into dusky purple and orange exposure spots. Where door handles would be, a brown cable is roped through two holes and padlocked by a facsimile of a paper plate, carved into just enough to snag the cable and balance. Other Clays sport strap hinges, raised textures, window-shaped cutouts, and intentionally decorative hardware. I find these particularly confounding and beautiful. Subtly pitting organic against mechanical, discursive against real, what is visual against what is true.

Most of the works in the show play with and eventually get free of the wall in some way, even the framed photos, called Knaves, which are the only works here with a deep illusionistic space. These show snippets of plant life and fungi with blurred backgrounds of wrinkled/obscured text. Close-ups of miniature worlds: leaves, mushroom caps, rose petals, and briars. They’re mounted onto a surface printed with the same soil bag labeling, and set back in heavy metal shadowbox frames, warm gray with welded markings on one side.

The flashiest group of works, titled Bonelights, are purportedly ruminations on the fruit bowl motif of art history. Gray resin slabs resemble complex plastic folding tables, flat, curved, and hinged together in impossible ways, with scalloped edges like awnings. Metal tubing is appended like legs or levers, or nestled into perfectly matching cavities — curving like conduit through preformed holes, or up and around naked air. They have the meticulous authority and obscured origins of any modern widget that can be summoned from the ether. A fake wicker handle on one edge, brackets of all kinds, clips, hinges, bits of fabric backing, and inset flourishes, such as a botanical print or a stick of wood with names of fruit varieties carved into it. These works swim around in the mind, pinging disparate areas of the brain. Almost placeable, undecipherable, flux is their forte. But the artist’s serial variations give us footholds to at least account for her creative decisions, which are unpredictable and delicious. 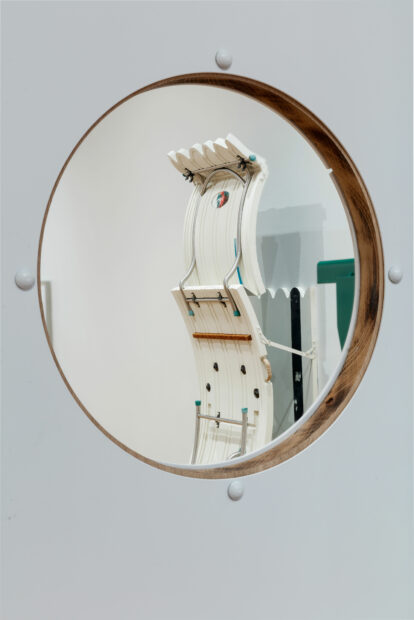 The question of nature alluded to by the show’s title and subject matter is largely left unanswered. As in our technologized lives, the scant threads leading back to anything resembling “natural” are too thin and tangled to trace. Language is one likely culprit. For as much text is present in and on these works, they operate in a way unbeholden to language — with its tendency to flatten or deflect meaning. They are unlocked, in part by the body, rather than by iconographic analysis or hermeneutics. There are aspects of them that would be as easily “gettable” by squirrels and sparrows as by art historians. Shiny, soft, smooth, rough, large, horizontal, sloped, green, and so on.

I instead take “soil” as metaphor of the primordial; and “sentence” its endless discursive constructions. And this is key, because unless we can reconcile our perceptive and linguistic faculties with ecological realities, the vast unseen networks of industries, mining, global transport, and landfills that invisibly stand in for our “soil” will end up writing the art historian and the sparrow alike out of the story altogether.

Magali Reus: A Sentence in Soil is on view through October 9, 2022 at the Nasher Sculpture Center in Dallas.