The Outwin 2022: American Portraiture Today, currently on view at the National Portrait Gallery in Washington, D.C., showcases the forty-two finalists of the Outwin Boochever Portrait Competition. This is the sixth iteration of the triennial competition which seeks to highlight contemporary takes on portraiture in the US and, as it might be expected, many of the works on display speak to the issues that have been at the forefront of the past few years such as isolation, immigration, and identity. While the four Texas artists who are finalists in the competition also tackle these issues, below are some of my favorite non-Texas works on view in the exhibition. 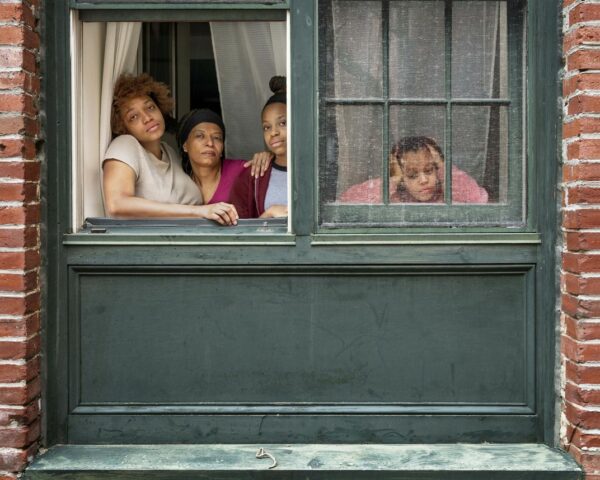 Rania Matar’s Minty, Kayla, Leyah, and Layla was taken at the onset of the COVID-19 pandemic. As businesses and schools shut down and people isolated themselves, Matar took to social media to put out a call for people who were willing to be photographed in the window of their home. As a whole, the series, On Either Side of the Window, captures a range of experiences and moods — not all of the images are as stark as the one that made it into the Outwin. The family depicted in this photograph appears exhausted and frustrated with their situation. Though the people on the left are physically close and have the barrier of the window lifted between them and the photographer, the young child on the right seems more forlorn through their pose, their separation from the group, and the window frame lines and window screen that partially obscure the child from view. 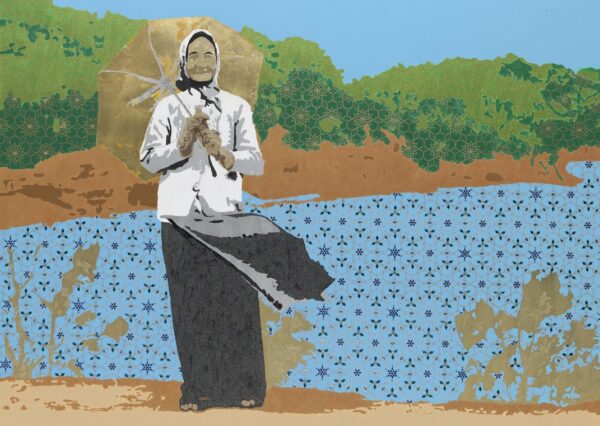 Khánh H. Lê, “She Waited for Her Family from This Point in Place,” 2021, acrylic paint, paper, and plastic jewels on canvas. Collection of the artist.

Khánh H. Lê’s She Waited for Her Family from This Point in Place, is a depiction of the artist’s grandmother. While the lovingly rendered image of an older woman with a kind smile comes across as peaceful, with a serene blue sky and lush green trees in the background, the piece actually is documentation of the separation of Lê’s family following the Vietnam War. Though the complete story is not detailed, Lê’s family fled Vietnam seeking safety, and in doing so they faced many of the same struggles that immigrants have long encountered, including family separation. (It is insinuated that his grandmother stayed in Vietnam.) The intricate patterns created with paint and jewels play within otherwise empty space and reflect a sense of tradition and fragmentation. 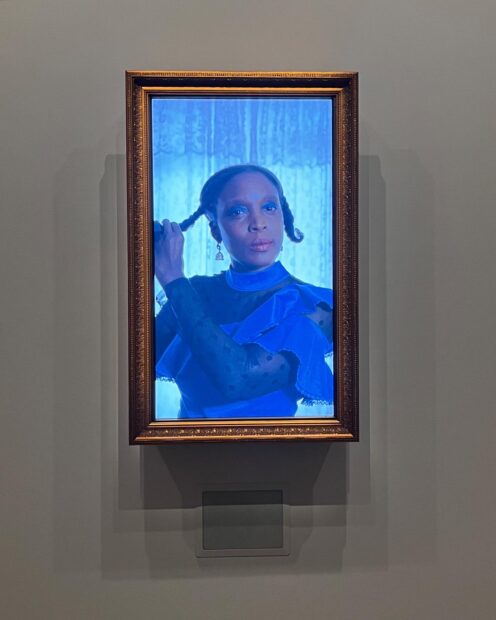 One of six video works in the exhibition, Adama Delphine Fawundu’s piece, the un-doing, is mesmerizing. The work, displayed in an ornate nineteenth-century frame, begins with the artist, a Black woman, dressed in an elegant black and blue dress and standing in front of white lacy curtains. A voice offscreen repeats the phrase, “My love is too sanctified to have thrown back on my face.” In slow motion, the woman reaches for her hair and begins to undo her braids. Throughout the video, as Fawudu slowly takes down and combs through her hair, the phrase is repeated in a hushed voice, and dramatic string music plays off and on. Nearly halfway through the video, additional parts of the choreopoem For Colored Girls Who Have Considered Suicide/When the Rainbow is Enuf by Ntozake Shange are spoken. The last two minutes see the lady in blue turn her back to the viewer, and then as she turns forward again the video suddenly shows two images of her superimposed as she looks at the viewer and turns her back once again.

For viewers who watch from the beginning, the first ten minutes set an expectation that the remaining video will be a slow continuation of the action that is unfolding. This shift at the end is slightly unsettling and underscores the significance of the final moment of liberation. The intimacy of approaching a singular figure, who throughout the length of the video seems to maintain eye contact as she lets her hair down, is a powerful reincarnation of Shange’s already iconic and important work.

Outwin 2022: American Portraiture Today will be on view through February 26, 2023 at the National Portrait Gallery. You can view the artworks online and vote for the People’s Choice Award winner at the Smithsonian’s website.

This and That: Clarissa Bonet and an Unknown...