As someone who is still relatively new to working at Glasstire, when I thought about writing a piece on Independence Day, I immediately did a search for past articles about flags. In 2020, former News Editor Christopher Blay wrote about the depiction of flags in Soul of a Nation: Art in the Age of Black Power. Last year, Blay highlighted works by eight Texas artists that use or reference the United States flag. When thinking about ways to expand this conversation, I recalled recent works by Texas-based Latino artists that use the flag.

I’m particularly interested in Latino artists who use American symbolism because as a Latino, I’ve found that many of us, regardless of country of origin, have a complicated relationship with the United States. While this country is seen as a place of promise and potential, it also has a deep history of harsh and inhumane treatment of immigrants and communities of color.

I reached out to artists Tina Medina, Alex Robinson, and Bernardo Vallarino to ask each of them about their relationships with the US flag and their decisions to use the flag in their work. Below are excerpts from our email exchanges.

Jessica Fuentes: What does the American flag mean to you?

Tina Medina (TM): I see the American flag for what it is, a piece of colored cloth that symbolizes a peoples’ ideals as a collective group. I see a broader perspective of the U.S. flag. I understand what it means for a very patriotic individual in our country, because I was born and raised in the U.S., I had the experiences of saluting the flag every morning and going to Fourth of July parades, waving a tiny flag in the air and being filled with awe for those who served in the military, who marched before me. 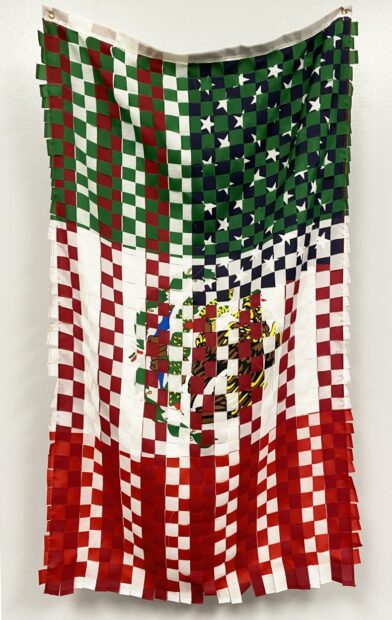 At the same time, I can also imagine what seeing the U.S. flag means to people in other countries, countries that may have been colonized or invaded by the U.S. I see all the history that compiles the U.S. when I see the flag. I see the Native Americans who were already here before the country had any inklings of existence, I see the slaves upon whose backs the country was built, I see the Indigenous peoples of Mexico who used to migrate freely before borders were established. When I see the red, white, and blue of our flag, I see the current issues of a country still struggling to come to terms with past histories and transgressions that continue to plague our society.

The flag means many things to me, including the freedoms bestowed upon me to create artworks using the flag — the first amendment rights of freedom of speech that as an artist give me courage and hope that our country can continue to grow and become better and better. The flag means a freedom to me to be able to deconstruct and reconstruct our reality.

Alex Robinson (AR): The American flag represents aspirational ideals, and is simultaneously full of violence. I am American, which means I am full of both.

As a kid growing up on military bases, if we were on base and in the car and Taps was playing at 5 pm, my dad would stop the car,  get out, and stand at attention. We flew the American flag at our house. It was something I have been connected to since a very young age, and it certainly became a symbol for something larger than myself. 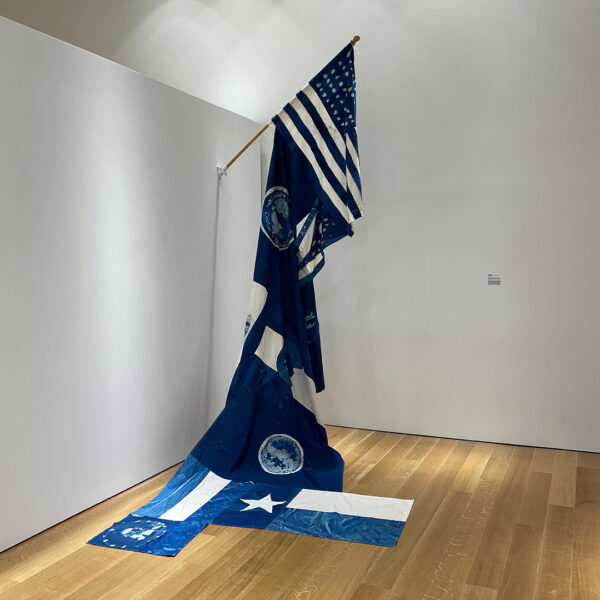 Because of my association with the military and having lived overseas, the American flag became something you are proud of, it is an extension of your American-ness. With De Donde Soy, I am certainly thinking about this in a hierarchical way; the American flag flies the highest, however, in approximate order to the ground are the places I have lived. My parents did a great job of keeping culture alive, especially with food, and they adopted foods from regions and countries and inserted them into our family traditions. I like to think that I contain multitudes (referencing “Song of Myself, 51” by Walt Whitman) and plan to give this forth to my own family as we build our future. 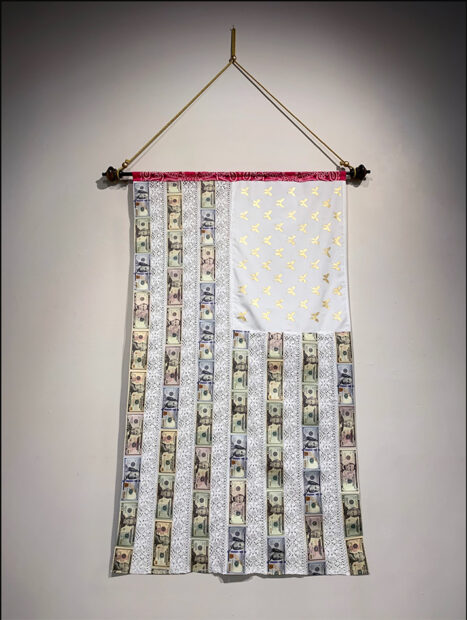 Bernardo Vallarino (BV): To me, the U.S. flag is a symbol that conveys the good and the bad of power. It additionally is a symbol that carries an almost universal feeling of hope. As a Colombian-American I have a deep respect for flags, in Colombia, the national flag is never worn as apparel and it’s in many ways sacred. That emotional reverence is easily transferable to the U.S. flag, however to me there’s also a sense of armor and shielding that comes with the stars and stripes if you happen to be a U.S. citizen.

JF: What sparked your interest in using the flag in your artistic practice?

TM: I was moved to work with the flag as part of my art right after the 2016 election when Trump won the presidency. All that election year, I suffered as many did, hearing the language used to describe certain peoples in the U.S. One such group were people from Mexico. As I myself have ancestry from Mexico, I had grown up with microaggressions, and I am sensitive to the plights of immigrants because my grandmother immigrated to this country in the 1950s.

Through my own research about people like me, I found that there is a richer and deeper history of my people that includes the loss of our Indigenous roots and the contributions of Mexicans in establishing the U.S. It also includes the continued work that many immigrants contribute as part of the growth of this country. When I hear hate speech and rhetoric against these people, I feel personally attacked.

Just like those protestors who took drastic actions by burning the flag, I felt moved to cut the flag, but in this instance I cut the flag with the intention of not destroying it, but instead I sought to take it apart and create something new, something symbolic of how I felt. 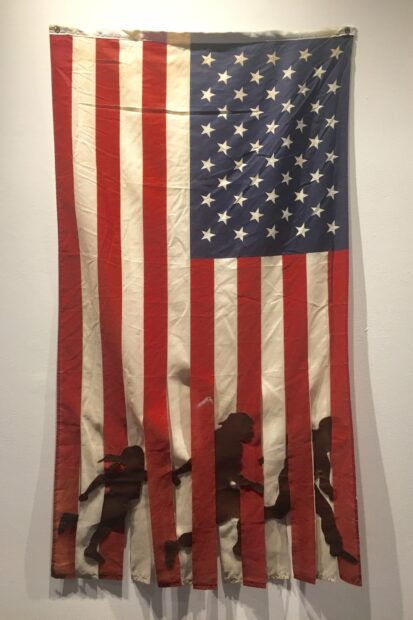 In the artwork Barreras/Barriers, I used the flag to symbolize the barriers that people of color have faced and continue to struggle with in the U.S. A literally brown silhouetted family runs through the stripes of the flag, which represent barriers. Another flag, Chain Link Fence, is a critique of how the U.S. touts freedom, yet the government currently holds women and children in immigration detention camps.

AR: I have always been interested in subtlety and in-betweens, and how belief, faith, and honor exist in that intangible space. In 2016, I started a project with my students at St. Edward’s University using drawings made by children at the Terezin Concentration Camp. Among other works, we also read Man’s Search for Meaning by Victor Frankl. I was also reading Robert Kennedy’s speech, The Mindless Menace of Violence, which he gave a day after Martin Luther King Jr. was murdered. My exposure to and the strong presence of history is a gift my father gave me. He is an idealist at best, and when reading documents like the United States Constitution or the Bill of Rights you can’t help but see how ideal these documents are, yet with knowledge of history and the current world, you can’t help but know how much they fall short. 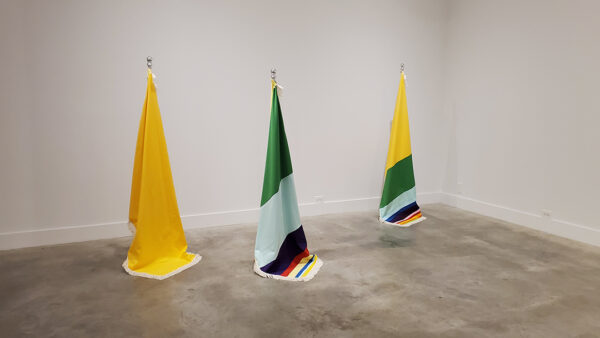 In 2017/18 I was already making the Bill of Rights morse code drawings. But it wasn’t until I started doing the background work for Authentic(ation) that I began using flags. I was already constructing my own flags and using them in video performance as a tool to stake claim (similar to the ridiculous notion of planting an American flag on the moon — we do not own it, but the symbol of putting your flag in the ground speaks volumes). This was mostly in response to my research into the history of the Southwest and the colonial violence of the Spanish…

The easiest visual representation of these ideals is the flag we fly — it seemed a natural extension to move from a coded language not meant for all to a symbol of freedom that we say is meant for all but know is not. 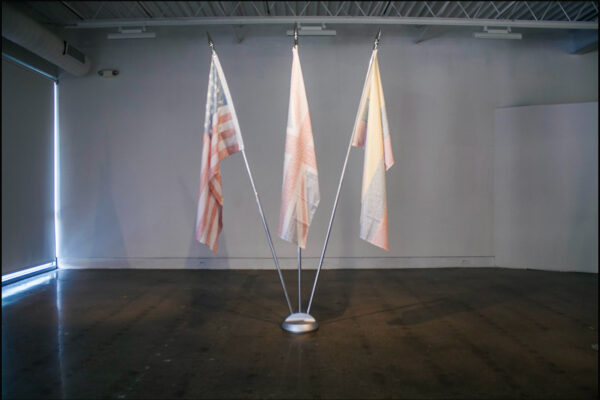 BV: I am always hyperaware of the common connections and symbolic context humans have towards objects and materials. I like to treat these inherent visceral connections as subliminal pathways to convey ideas. As I mentioned before, the U.S. flag carries a treasure trove of meaning that can be easily tapped into to describe elements of power or hope. Therefore, when artistically discussing social elements of violence, abuse of power, politics, control, and hypocrisy, the U.S. flag has always been one of the best symbols to use.

JF: What do you hope people will consider when they look at your flag works? What conversation are you hoping to spark? 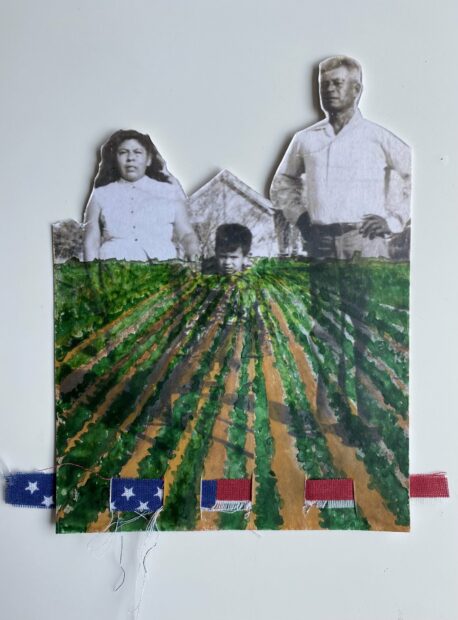 TM: By using the flag in my art I am hoping to convey to viewers that many people who seem like outsiders to U.S./American culture are actually interwoven into the very culture and success of this country. To be “American” is not just one perspective, but many perspectives, and identity and belonging is much more complicated than it appears. I hope my art is a reminder to never forget history, to remember people as human, and to question the status quo.

AR: The best flag is that which we can conjure from memory. But memory is elastic, it changes over time. The conversation I aim to spark is to question what one knows, what one sees, and what one remembers. 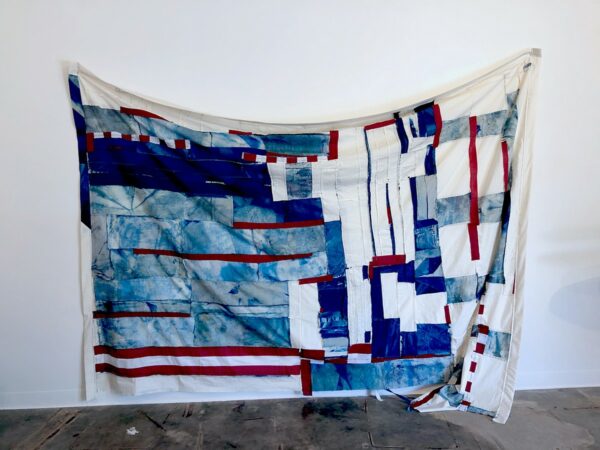 Los intersticios is an object that functions on many levels. It’s a large quilt-like object, big enough to fit on a bed, made with scraps, made for care. It’s constructed like a crazy quilt with bits and pieces of plain cotton muslin and cyanotype. Where the pieces don’t quite meet, it is mended with bits of the American flag. The piece is shown in the reverse so as to reveal its stitching and piecing together, another visual metaphor about how histories are constructed.

When we think about what it means to be American, we say things like “as American as apple pie” — but because of my background and familial heritage, my people aren’t welcome to the whole of that ideal. I like the quilt form as a reference to the idea of Americana. I know that I am as American as apple pie, but I also choose to see the complication of that notion. I want to have a conversation about the multitudes that make up the American experience. 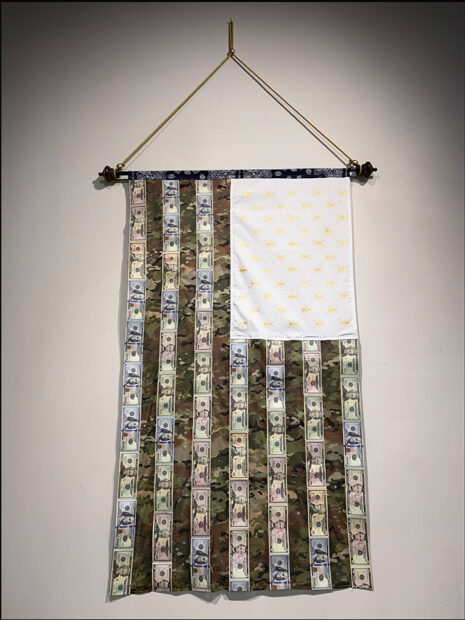 BV: When people look at my artworks that have the U.S. flag or elements that convey the flag, I am hoping that they take into consideration the good and the bad that is contextualized in that symbol. As with all my works, my intention is to create emotionally engaging experiences that may direct the viewer to morally self-reflect on the social issues I address. It is common to see those moments of reflection externalized by the comments or conversations among viewers, and they’re sometimes addressed directly towards me. One thing that is noticeable, and the reason why I use flags, is that viewers’ reactions are always stronger when certain flags are used, including America’s flag.