Through the Lens: Two Photo Exhibitions at Arts Fort Worth

As a photographer, I am always drawn to the medium when visiting galleries. Earlier this month, I attended the Arts Fort Worth (formerly the Fort Worth Community Arts Center) opening reception for their new exhibitions, and was particularly attracted to  two solo photo shows. 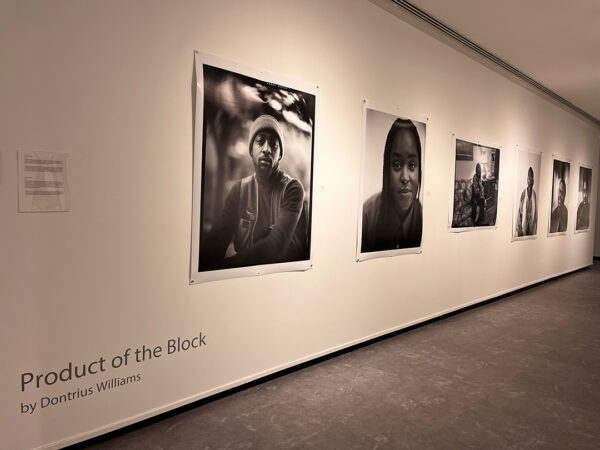 Dontrius Williams’ “Product of the Block” 2022.

In the Frost Gallery, a small gallery space near the entrance of the center, Dontrius Williams’ show Product of the Block is in conversation with Buckets by Christopher Knowles. Both artists are based in Fort Worth, as is artist Charles Gray, who curated the shows. Gray was invited to curate this gallery at Arts Fort Worth by the organization’s Exhibitions Manager, Robert Long.

About his choice to show work by Williams and Knowles, Gray said, “I’ve known Dontrius and Chris upwards of eight years… I assumed that they had been showing in the city prior to this experience. But… finding out they hadn’t had a show, this was a great opportunity to not only show them, but hopefully create a space for our community to recognize them as somebody to continue to have work shown in the DFW area.” 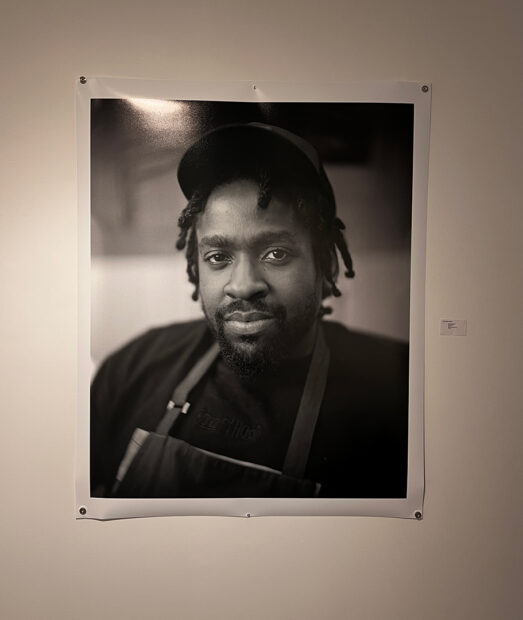 Williams’ portrait series highlights artists and creators in and from the North Texas area. Made with a 4×5 large format film camera, the large-scale black and white photographs are beautifully composed and use a shallow depth of focus. 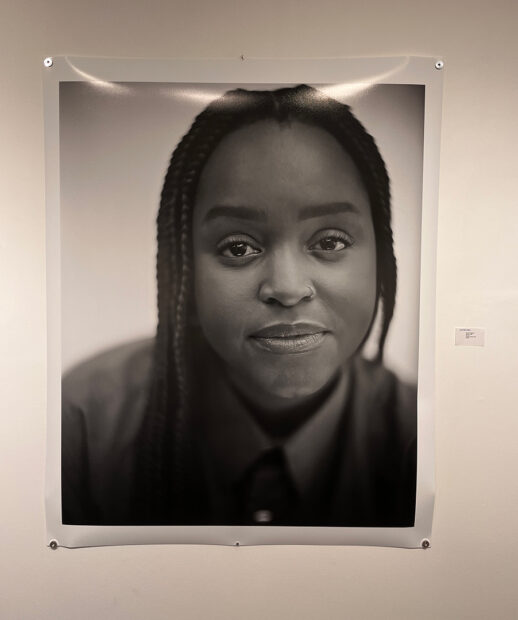 Each work is titled with the subject’s first name, which at once feels inviting and also obscures additional information about them. When writing, I think about the context I give to readers and what that says about my audience. If I add context to explain a word, for example that might mean I assume the majority of my audience isn’t familiar with the word. Whereas if I don’t add context, then I’m assuming my audience knows the word or concept. Williams gives us titles like Henry, Riley, and Taylor, which sets the expectation that the audience will know these names or be familiar with the sitters’ faces. In a way, it recognizes the status that each sitter has — if not to a broader audience, then to the audience that Williams was considering as he made and titled the works. 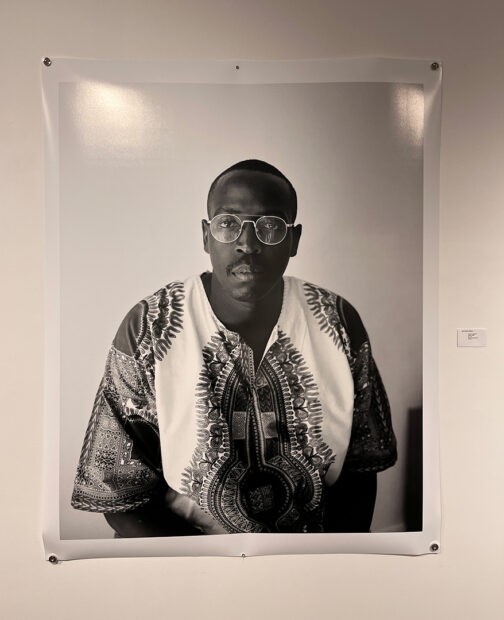 When asked about his audience, Williams told me, “I try to make my work for future generations to come… so definitely, the youth is who I think of.” 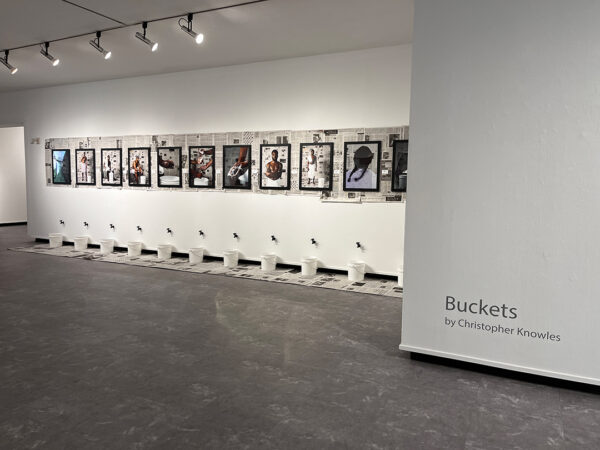 Across the gallery is Christopher Knowles’ Buckets, a series of photographs depicting two men using a plastic bucket to bathe. Below each image is a water spigot and a large white plastic bucket partially filled with water. The space, on the ground under the buckets and on the wall behind the framed photographs, is lined with newspaper. The seemingly simple materials hold a substantial story. 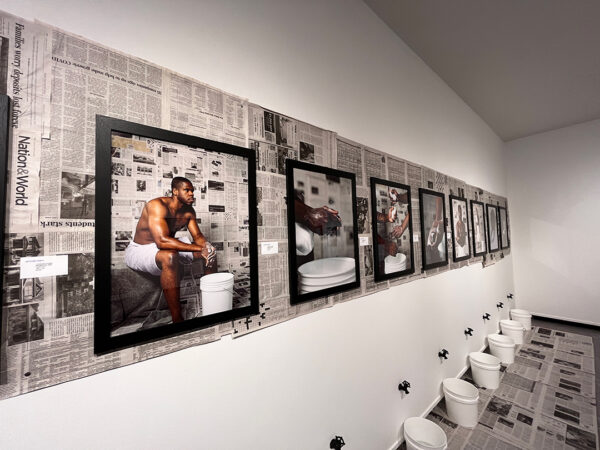 In his artist statement, Knowles explains that as a child, he and his nephew would take turns bathing using a bucket and soap. They would place newspaper below the bucket to keep the ground from getting drenched as they dipped their hand towels in the water. 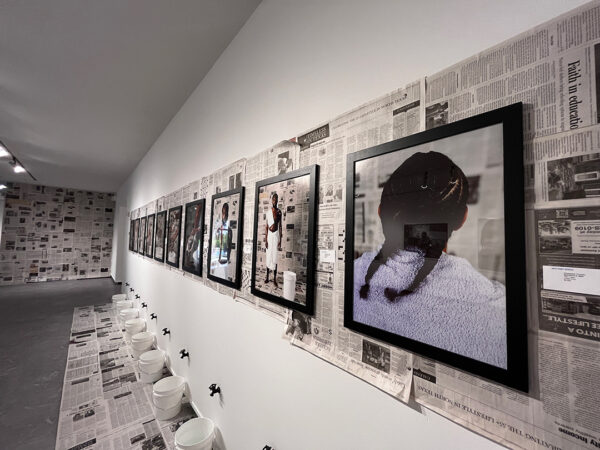 Though the story references a childhood memory, Knowles’ images use grown men as the subjects. This choice brings a vulnerability to the scene, but through both the confident stances of the men and their powerful gazes, there is also a sense of strength and dignity. While most images depict a single person, there is one photograph that has two sets of hands, each with a bar of soap, positioned just above the shared bucket. The inclusion of this image feels playful and also serves as a reminder of the power of shared experiences.

This idea of a shared experience also spoke to the larger idea of pairing shows by Williams and Knowles together in the gallery. Williams has remarked, “Especially in the Fort Worth area, at least since I’ve been in the art game, I have never seen a Black photographer show in that space. So, to have two working local Black photographers showing images is historic for the city.”

The exhibition, which was originally slated to run through June 26, will now be moved to a different gallery within the building. It will come down from its current location on June 25 and will be on view in the new space from July 1 – 30, 2022.

It’s Alive! Alive! The Resuscitation of Art in...