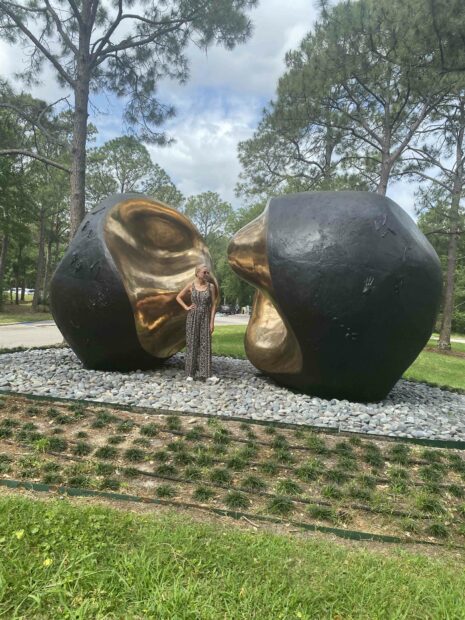 At the entrance of the Bayou Building is Pablo Serrano’s Spiritus Mundi, installed in 1977. From a distance, the two larger-than-life black orbs appear caught in a moment of suspension immediately preceding or following impact. However, upon closer inspection, hands appear to push the two opposite ends of the globes together, reflecting Serrano’s concerns with universal binaries, such as the tension between creation and destruction, order and chaos. Such existential concerns, echoed in years prior with the growth of NASA and space exploration, are connected to the 1971 founding of UHCL, which was a direct response to the demand for high-level courses in engineering and related fields. 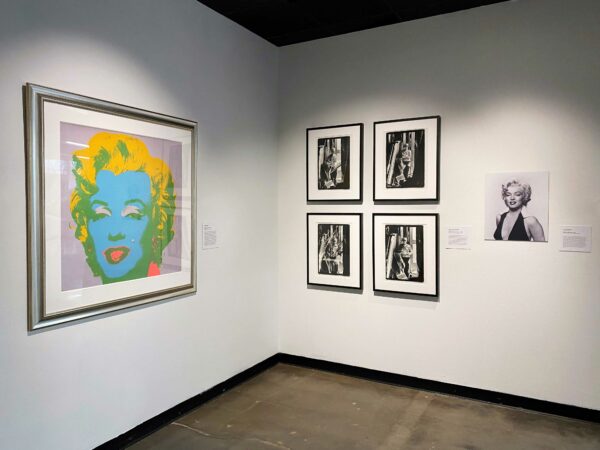 The Bayou Building, the hub of student life and campus resources, resembles a shopping mall with a central atrium, several levels, and skylights. A corner, glass-walled room — almost like a small storefront — houses The UHCL Art Gallery. On view through the end of June, Instantaneous Beauty: Andy Warhol and the Photographic Process includes photos, prints, video clips, and other didactic materials that highlight the artist’s multifaceted approach to his art practice and relationship to the camera.

While the show includes examples of the kinds of instant cameras Warhol would have used and documentary video clips featuring the artist and his subjects, the exhibition’s strength is its juxtaposition of source material with varying artworks. Warhol’s iconic Marilyn Monroe silkscreen, first printed in 1967, paired with a visual label of the original photo by Frank Powolny in 1953, introduces the exhibition. Instantaneous Beauty showcases the artist’s approach to photography— affirming intersections with contemporary celebrity, society, and print culture in his Polaroids, film photos, and printmaking.

By the early 70s, Warhol responded to blue blood socialites commissioning the artist for their own “Marilyn moment,” and would take hundreds of 3 x 4-inch Polaroid photos as portrait studies. Another subject Warhol captured in instant film includes it-girls of the moment, such as eighties actress and singer Pia Zadora — a tabloid sensation famous for her marriage to an Israeli millionaire 30 years her senior, and for winning both a Golden Globe and a Razzie for the same role in Butterfly (1982). 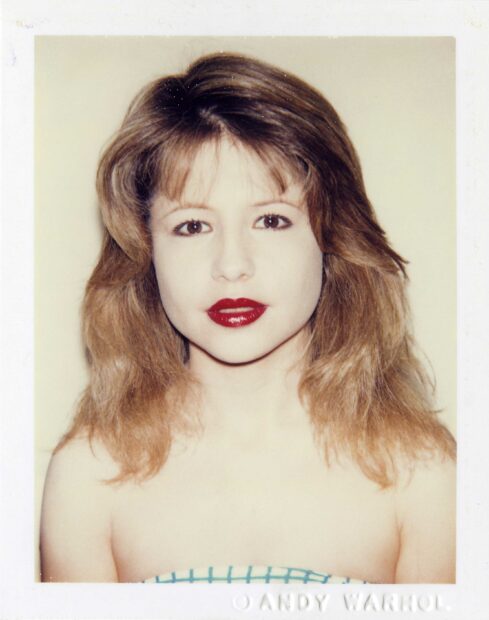 One wall in the gallery also illustrates Warhol’s playful approach to photography, elevating the middle-class, instant camera format’s ability to capture glamorous Polaroid portraits of various sitters. Throughout this display of Polaroids are black and white film prints that show banal scenes of everyday moments with friends. 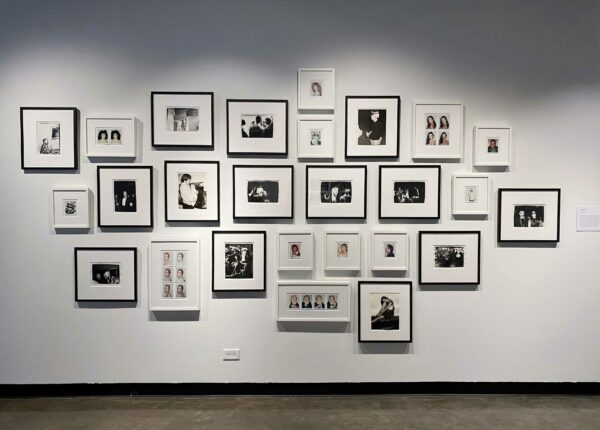 Beyond the gallery, the PAUHS collection in the Bayou Building is displayed in common areas where students gather to study or relax between classes. The benefits of these spaces are expansive walls that can support large-scale works. Some pieces belong to the PAUHS collection, and others are gems that have been gifted to the school, including a Judy Chicago The Birth Project quilt, and an abstract work, Untitled (1968), by Beaumont-born, Texas painter Richard Stout. The blues and greens in Stout’s work simultaneously capture the landscape palette of the coastal Houston suburb, as well as the school colors, which are repeated throughout the room’s interior design. 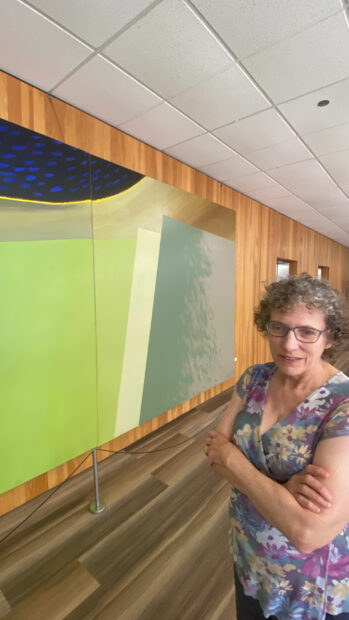 Karen Fiscus, Assistant Director of UHCL Art Gallery, in front of Richard Stout (1934-2020), “Untitled,” 1968, on view in the second floor of the Bayou Building. Photo by the author.

On another wall on the second floor hangs a large painting by Dorothy Hood. The 1979 piece, Time the Bridge of Doors, is a featured work in the PAUHS exhibition Dorothy Hood: The Edge of Being, on view at UHCL and the central University of Houston (UH) campus. The main campus is displaying Hood’s works and archival objects in its Special Collections at the MD Anderson Library through March 2023. The exhibition also highlights other large-scale paintings by the artist, which are displayed permanently in the Cynthia Woods Mitchell Center for the Arts and the Band Complex at TDECU Stadium. 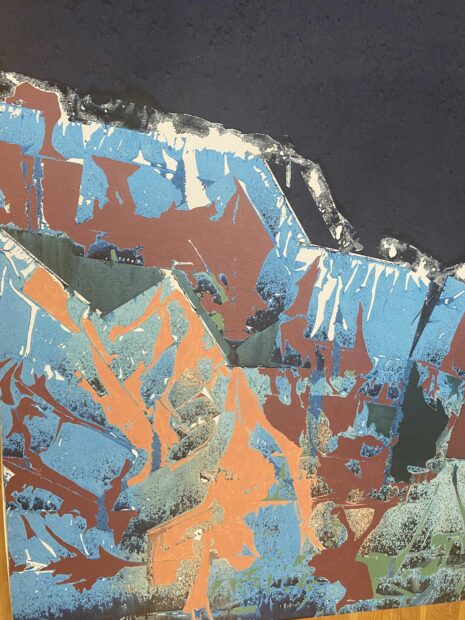 In contrast to the reds and dark colors dominating paintings on view in the Special Collections at UH, UHCL’s Time the Bridge of Doors is a large, blue canvas with a colorful, hilly landscape — the horizon punctured by a vertical, red blast in the sky. The work’s label cites Mexico as inspiration, but nearby NASA, and rocket launches sending humankind to new frontiers can also be read in the composition. Hood’s painting at UHCL is a prime example of her experimentation with texture in the late 70s and early 80s, with a frottaged, sky blue landscape contour frosting hilltops and plains in the painting. 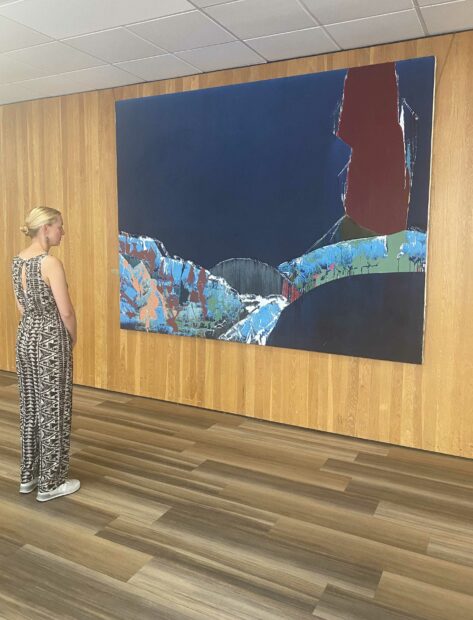 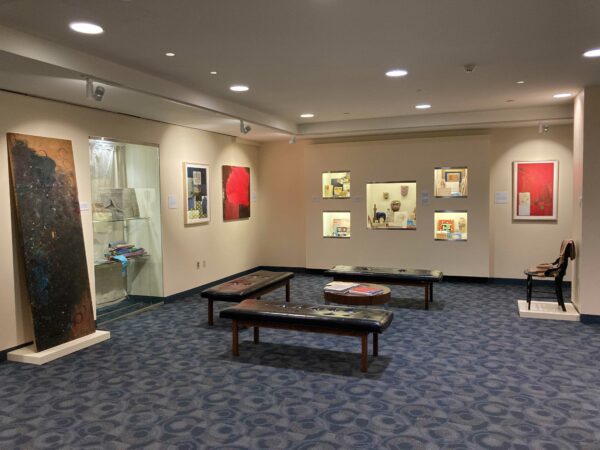 “Dorothy Hood: The Edge of Being,” on view at the Special Collections, on the second floor of the MD Anderson Library at the University of Houston. Collection Public Art UHS. Photo courtesy of PAUHS.

The PAUHS collection at UHCL punctuates each of the school’s academic buildings and is visible across its green, walkable campus. William Crovello’s Steel Study (1977), in the lobby of the STEM Building, commands attention with its reflective, silver exterior and rounded forms emulating calligraphic script. One student approached my group, which included Cammie Tipton-Amini, Assistant Curator of PAUHS, and Karen Fiscus, Assistant Director of UHCL Art Gallery, noting that he visits the work multiple times while attending classes in the building. Without having examined the label, he mentioned he recognized the sculpture’s intersections with typography, and the kinship between the steel material used in the work and the kinds of materials discussed in his process operating technology classes. 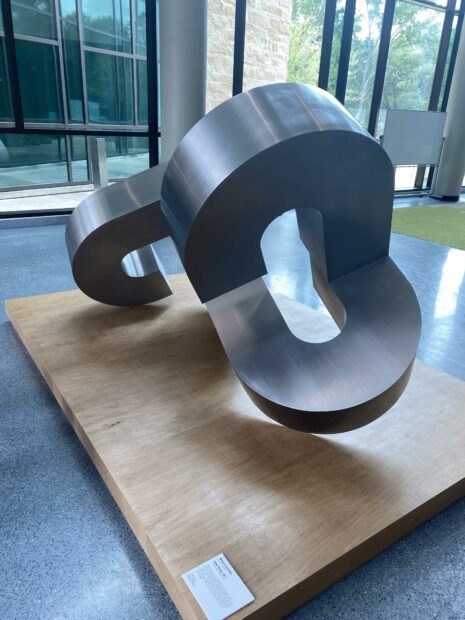 UHCL’s public art collection is thoughtfully curated to project an identity at the intersection of the Gulf Coast and aerospace. Temporary exhibitions organized by PAUHS and exhibited at the university system’s different campuses highlight significant works and distinguished acquisitions in the collection.

Instantaneous Beauty: Andy Warhol and the Photographic Process is on view at the University of Houston-Clear Lake Art Gallery through June 24.

Other works mentioned from Public Art of the University of Houston System collection are permanently on view at the Clear Lake campus.

The University of Houston Clear Lake Art Gallery is a gem that has flown under the radar. I had a major one person exhibition there in May of 2021 “EARTH AT THE EDGE” which was not well attended because school was not in session and it seemed to me that the community was not very supportive either. Eric Despard, Director of Cultural Arts and Karen Fiscus, Assistant Director of the UHCL Art Gallery, do an outstanding job of promoting their exhibitions and programs and attract world renown artists. It appears that this current exhibition of Andy Warhol photography is receiving the same lack of attention. Thank you Caitlin Duerler Chavez for your article and highlighting not just the Warhol exhibition, but the major works in the UHCL collection: Richard Stout, Dorothy Hood, William Crovello, Pablo Serrano; but missing is mention of the beautiful granite sculptures of Masaru Takaguchi. A drive from Houston down to the UHCL campus is worth the visit where within the Bayou Building is an impressive collection as well as a beautiful gallery.

An HJ Bott “Flight” bronze sculpture is at the bridgehead entrance to campus. It’s base holds a capsule filled with items from the 1960s and 1970s to be opened in 2076.

Would be nice if this had appeared in my media feed way prior to the end of the Warhol exhibition in June 24. This did not show up and wasn’t seen until July 19th! This article popped up via Google News page.