Joining Culture and the Land: Karla García’s “Rebuilt from the Ground Up” 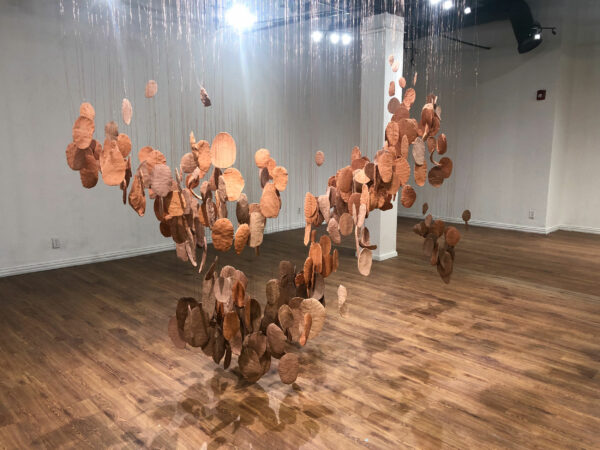 Rebuilt from the Ground Up is a large-scale ceramic installation of 500 handmade terracotta pieces that resemble nopal de orejas, or the ears of the prickly pear cactus. The cactus, a direct reference to the ancient history of Mexico and the U.S./Mexico border, is a ubiquitous symbol of the region, and is usually tied to Mexico and its national flag. Karla García, however, uses the cactus in her work as something different and more deeply personal.

When I first encountered this piece in its final state, I remember being struck by the display of the terracotta orejas in this complex, yet compact arrangement. The piece is concentrated in the center of the space and is further arranged in clusters. You get the feeling some of them will run into each other somehow, or will become attached to each other and transform into a different life form. Walking around the installation, its composition constantly changes and transforms. Depending on where I looked, certain viewpoints of the piece spoke to me. 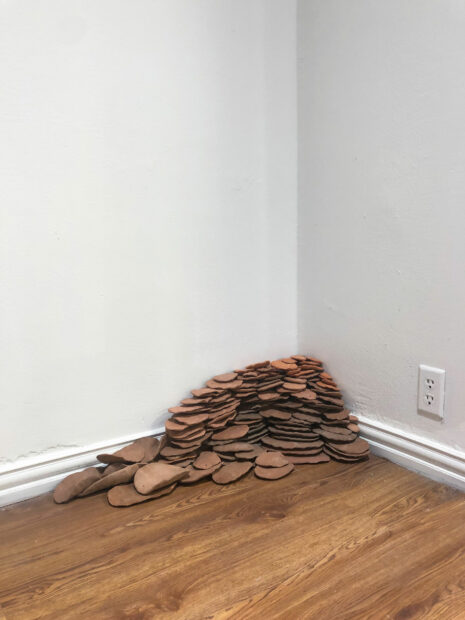 Belonging and citizenship is re-imagined in this work by the way each nopal ear is suspended in mid-air. As Mexican-Americans, we are constantly caught in between two cultures, two languages, and two ways of life. We grow up well aware of the “legality” or “illegality” of our presence in this country. I see each nopal ear as representing us as people; each oreja elegantly floats upwards at differing heights, held only by copper-coated wire that glistens under the spotlights.

In a corner of the space there is also a pile of nopal ears that are carefully balanced on top of each other. This extension of the main installation is a different iteration of a piece, called Trials and Tribulations, originally made for the Nasher Sculpture Center using terra cotta fragments García collected during a residency in France in 2020. Rebuilt from the Ground Up echoes the U.S./Mexico border and García’s home as a landscape and as something more — as a living place in itself. 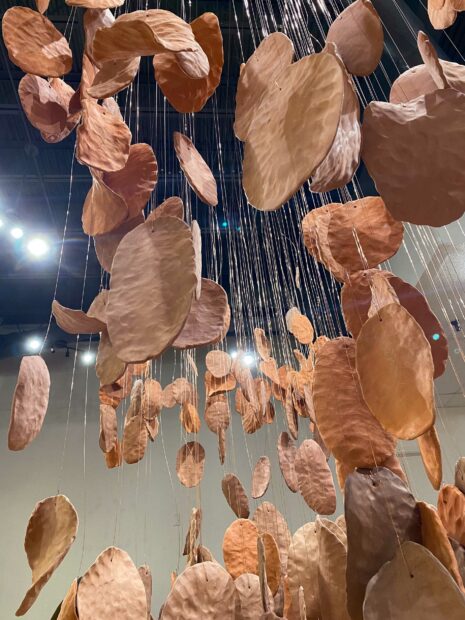 Colors and materials in this installation are closely related to García’s idea of “carrying the land,” or the idea of carrying all of that which has made someone who they are — specifically, culturally and through their relationship with the literal environment. Clay as a material is malleable and has a direct relationship with the earth, as well as a deep-rooted history with ancient Mesoamerican art. García’s use of coffee as a dye also lends itself to her direct connection to the land and personal memory. Dipping each piece into coffee invited memories for the artist of drinking coffee and eating pan dulce (sweet bread) with her grandmother, who helped raise her, in her birthplace of Juárez, MX (across the border from El Paso, TX). 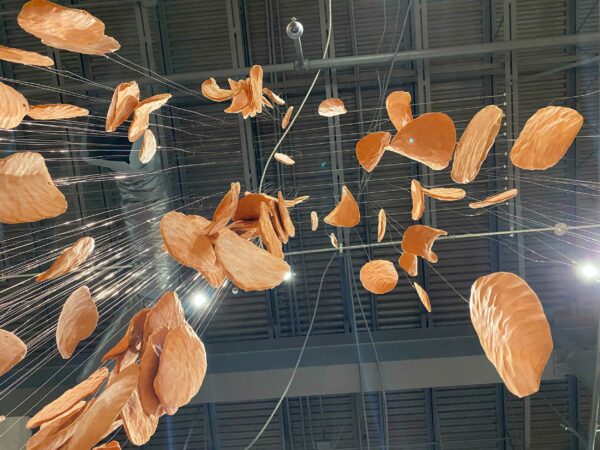 Karla García, “Rebuilt from the Ground Up,” view from under the installation. Photo by Melissa Gamez Herrera.

The process of making each cactus ear came from the repetitive and meditative act of “pinching,” which involves forming the clay using hands and fingertips. These impressions, repeated over and over again, bring to light the reaffirmation of one’s cultural identity, mainly a Mexican-American woman’s identity, and embeds it into the Earth — our home. As García writes in La Línea Imaginaria, “…[The cacti] exist as part of the land, teaching and reminding us of our personal and cultural history.” Drawing on this history, she questions the current state of immigration in relation to her life in the desert region. 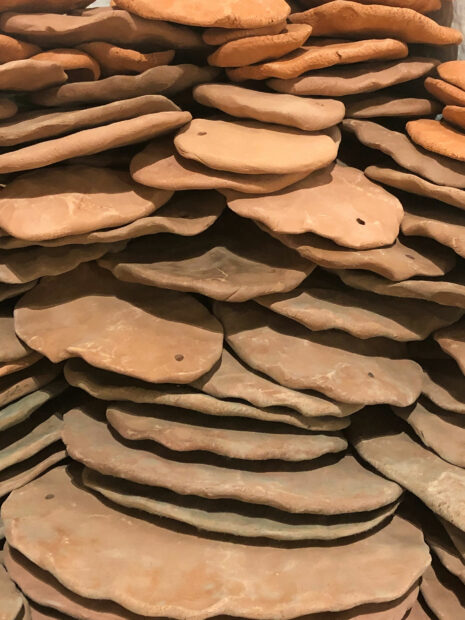 To deconstruct and abstract the cactus is to separate this well-known desert plant from a nationalist Mexican identity. García takes hold of her own lived experience as a Mexican-American artist and uses the symbol of the cactus to express her deep-rooted love for culture, history and the land. Rebuilt from the Ground Up re-imagines the dominant American narrative, which misrepresents Mexican immigrants as “alien” or people who don’t belong. It invites us to reconsider the land and our response to it as an important cultural marker for us as human beings.

Rebuilt from the Ground Up is on view at Norman Brown Gallery at the Goldmark Cultural Center in Dallas, TX. It is up through June 10, 2022. A closing reception will take place on Saturday, June 4, 2022 from 1-3 pm.

What sensitivity and passion you display with the humble clay and cactus to bare your soul. Your artistry is unique and stirs the souls of we with whom you share it. Thank you, Karla.
I look forward to your future works.