Forklift Danceworks: “Dances for Dogs and the People Who Walk Them” in Austin

by Lauren Moya Ford May 29, 2022
FacebookTwitterEmail 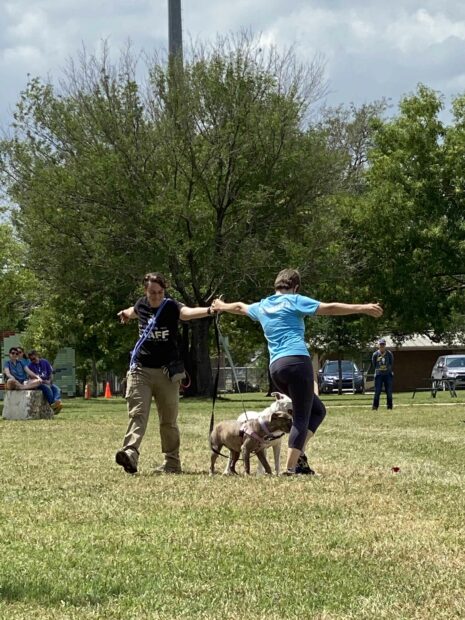 A few Saturdays ago, I attended my first-ever dog dance performance. As a dog lover who has recently adopted a new puppy, I found it impossible to keep from smiling while watching Dances for Dogs and People Who Walk Them, a free performance and community event presented by Forklift Danceworks and the Austin Animal Center (AAC). The AAC’s front lawn became a dance floor as dogs and their human partners moved around to a score of jazzy music played by a live band. I wasn’t the only one enjoying the show: a sizable audience of people and pets on picnic blankets were clearly having a good time, too.

But the performance was more than just a sunny afternoon of fun. Dances for Dogs is the latest project from one of Austin’s most innovative dance programs. Since 2001, Forklift has partnered with firefighters, trash collectors, lifeguards, and other public workers to create performances based on their skills and labor practices. The resulting collaborative dances highlight these individuals’ vital but often-overlooked contributions to their communities’ daily lives, raising questions about what dance can be, and who can perform it. In this piece, Forklift paid tribute to (and featured) AAC vets, volunteers, cleaning staff, and animal protection officers, drawing attention to the many types of work behind caring for animals and finding them their forever homes. 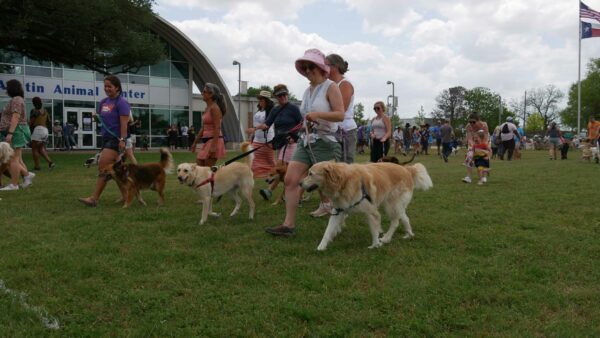 Dances for Dogs was Forklift’s first in-person show since the beginning of the pandemic, and was originally performed at Austin’s Zilker Park in 2000. However, the events of the last two years compelled the group’s organizers to restage the piece. In a recent email, Forklift choreographer and program manager Gretchen LaMotte explained, “It was a significant moment to celebrate pets. One in five households adopted pets during the pandemic and our daily lives became even more intertwined with those of our pets.” 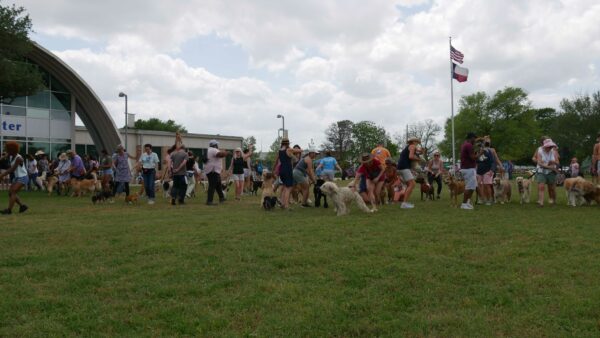 Celebration is an apt term. Though it was clearly planned, the performance also had a festive, informal atmosphere. Dog dancers of all sizes did their best to keep up with their human handlers as upbeat music played, executing impressive tricks and sometimes getting laughs for their inevitable distractions or missed cues. AAC staff members, accompanied by heartfelt voiceovers about their jobs, moved with the motions and tools that they use each day, sweeping with the brooms that they use to clean kennels, and driving their specialized animal transportation vehicles.

Each vignette was met with enthusiastic applause from the audience, and it occurred to me that — as with so many others who serve the public from behind the scenes — it must be rare for these worker-performers to be directly thanked or praised for what they do. The Forklift performance provided a space for this recognition, and for the audience to become aware of the great amount of labor behind this community institution. 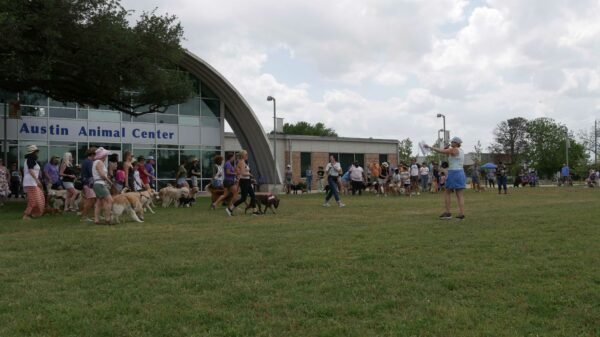 In this way, Dances for Dogs was entertaining and thought-provoking. Forklift’s mission challenges traditional notions about the accessibility of art, in terms of who can create it and what it can be about. It also vindicates the work of everyday but important people, in this case the ones who care for hundreds of animals each day. Their dedication has very real, life-changing and life-saving implications. “The efforts to make and keep Austin [a] no-kill city are community wide — and take many partners and individuals,” LaMotte said. “We hope [the performance] will inspire people to get involved and spread the word to adopt locally.”

Dances for Dogs and People Who Walk Them was performed at the Austin Animal Center on April 23, 2022.

Houston’s Mayor is Currently Accepting Proposals for the...