by Ashley Allen May 28, 2022
FacebookTwitterEmail 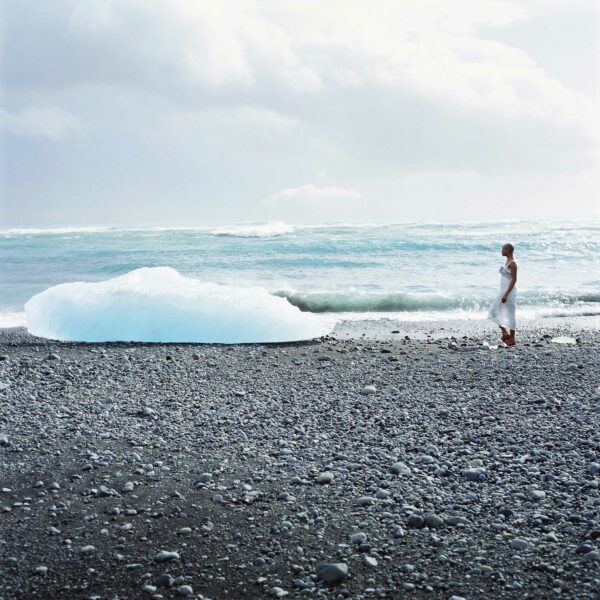 Now on-view at Ruby City, in the Southtown neighborhood of San Antonio, True North is one part of a three-part series created by Julien titled Expeditions. The series explores the connected and interdependent nature of the world and the resulting passage of people. This video is one of over 50 works created by Julien included in the collection of Ruby City and the Linda Pace Foundation.

In a press release, Ruby City cites the historical context the film is in conversation with, saying it is “loosely based on the journey of Matthew Henson (1866-1955), the African-American explorer who was widely believed to be the first person to reach the geographic North Pole 113 years ago this month… Julien reinserts Henson’s significant contributions, which were largely overlooked, into the historical record.” 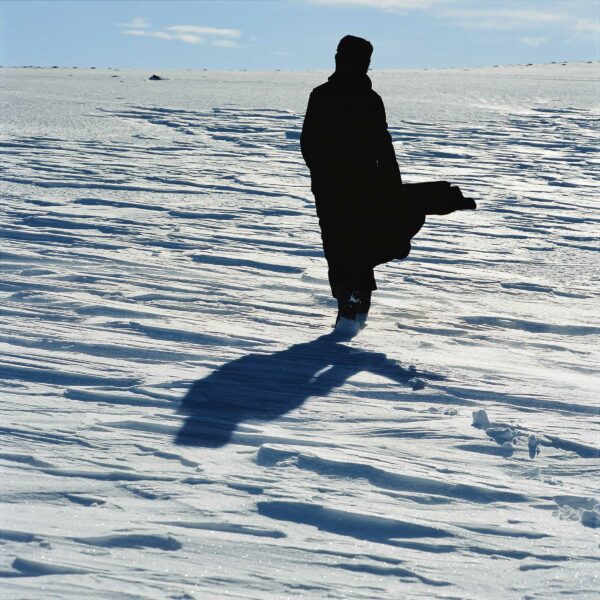 As a queer, white writer, I will refrain from speaking on or attempting to interpret representations of the Black American experience, and also attempting to decode embedded racial symbolism in the film. Instead, I will provide a formal account of Julien’s True North, in an effort to detect the methods by which the artist expands on the existing historical record to include those who have been repeatedly and traditionally excluded from the narrative of history.

The 14-minute, 20-second-long film follows the wanderings of a solo figure, wearing a black fur-lined parka, through an isolated Arctic terrain. The figure does not conform with traditional notions and manifestations of the gender binary, and is instead depicted as an alternatively imagined heroic figure, breaking from patriarchal norms. 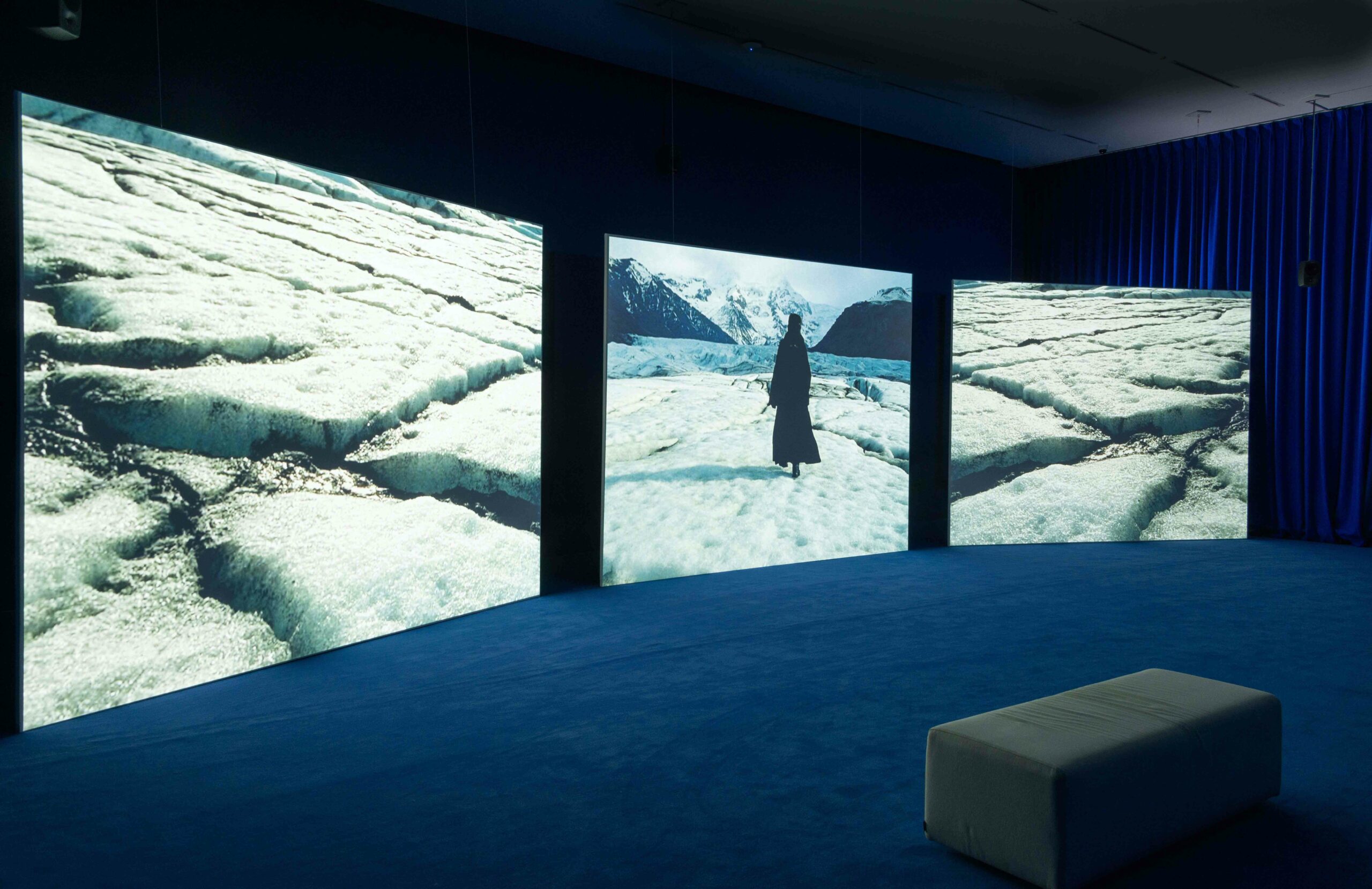 Projected onto three large-scale screens that envelop the viewer in a captivating and alluring experience, the film is aided by dynamic sounds and a cool-toned color palette. The film begins with the three screens blanketed in white, with the sound of feet walking across crunching snow. The white screens then begin to pulsate with flashes of an Arctic landscape, breaking the solid white facade and transporting the viewer into an icy cold setting. Shades of blue, white, turquoise, and gray visually match the accompanying sounds of crunching ice and rushing water.

Following the lone figure moving through and across the three screens, the camera angles are varied to include wide-angle views, close-up shots of the ground and surrounding landscape, and at times shaky camera views of the solo figure’s feet. Suddenly inside of an igloo-constructed church nave, the steady camera is manipulated to create a shaken effect, as if the camera is held by the solo figure.

Due to sudden shifts in camera angles and movements, the viewer can assume the shifting perspective of both third-person spectator and first-person explorer at different times throughout the journey, depending on where the camera is positioned. This first-person perspective is aided by heavy breathing sounds accompanying the shaky, ground-focused camera. 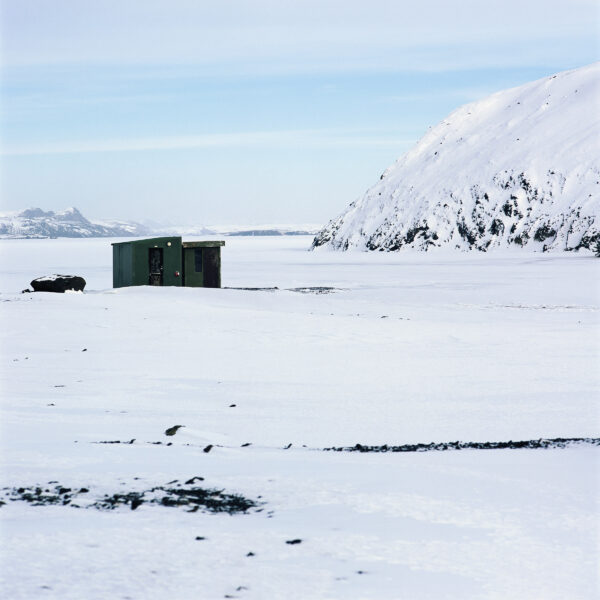 Towards the middle of the film, an ominous voice-over says, “To be entombed in ice. To freeze as you walk. Or to drop from starvation is all in the game. Death can come from a hundred directions at once in that frozen waste. But there is glory locked in that icy hell and my soul will never give me peace until it’s mine.”

Aided by suspenseful instrumental sounds and bass vibrations, this foreshadowing suddenly comes to life as we see the solo figure’s feet fall into a dark hole before the screens go completely black. This abrupt transition leaves the viewer in a lurch, waiting to see the next chapter of the figure’s adventure unfold. The sharp transitions, along with the overhead sound suddenly cutting on and off, create an unpredictability throughout the film, leaving spaces for alternative narratives to be conceived.

Julien’s website includes an interpretation of the lone explorer, arguing that “in the struggling figure we find a succinct metaphor of endless traversing, symbolizing the voyage of the modern that has to be experienced by others.” The sound accompanying the film plays a large role in transporting the viewer to this representation of Arctic quest, at times creating a serene atmosphere, and at other times, a chaotic and suspenseful one. 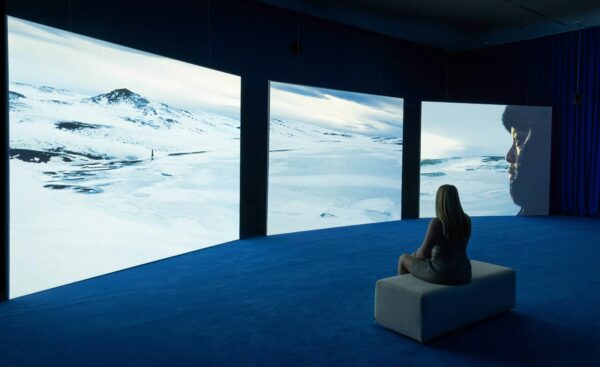 The title True North works to question the validity and accuracy of the historical narrative of the first expedition to the North Pole. It asserts the honesty of the themes of identity and exploration played out in Julien’s film. The fragmented nature of the narrative evolving in the film perhaps works to mirror gaps included in the accepted narrative of history — we must question our authors and their inherent biases and shortcomings.

Whereas the traditional historical narrative focuses on the successes of mainly white, cisgender men, the solo hero in Julien’s counter-historical narrative serves as a foil. By expanding the historical record in True North through means of representation, shifting perspective, and an unlocked narrative, Julien creates space for people who have been pushed to the margins, and allows them to imagine themselves as the lone hero on an exploration through the dangerous and breathtaking Arctic landscape.

True North is now on-view at Ruby City, from May 5 to July 24, and again from September 8 through January 2023.