by Mary K. Cantrell May 16, 2022
FacebookTwitterEmail Empty wall anchors, which once supported a suite of 20 woodcuts by artist Donald Judd, are all that remain on one central wall in printer Robert Arber’s downtown Marfa studio.

The prints have been temporarily removed from their home where they’ve long hung in order to be included in The Printer’s Proof: Artist and Printer Collaborations, a large-scale exhibition on view through May 15 at the Albuquerque Museum in New Mexico. Arber is one of six master printers represented in the show, all with New Mexico ties.

The Judd woodcuts, considered a singular work, were selected to be included in curator Josie Lopez’s exhibition, along with around 20 other prints Arber had a hand in creating. Also in the show are lithographs Arber realized in collaboration with artists Elaine de Kooning, Al Taylor, Bruce Nauman, John Baldessari, and Charline von Heyl, as well as a number of prints from the museum’s permanent collection. Arber said he supported the exhibition’s central theme of printmaking as first and foremost a collaborative effort between an artist and a printer. “I am a collaborator. I mean, that’s what I am,” said Arber. “To etch a stone, etch a copper plate or carve a woodblock, that’s technical stuff you learn. But you have to work to have that collaboration.”

Arber has made a 40-year career out of printmaking, having studied at the Tamarind Institute in Albuquerque and first opening up his own shop in 1967 in Alameda, New Mexico. His brick and mortar, Arber and Son Editions, was so named because his son, who is in fact not involved in the printmaking industry, was born around the time Arber established his shop. Arber specializes in limited edition lithographs, which on average equate to 40 editions. He shares a well-practiced telling of the way he came to be in Marfa working with Judd  — on route to Houston in 1988, he stopped in Marfa to visit the newly-established Chinati Foundation and, unlike today, there were no formal tours other than a ride-around led by Judd’s then-studio assistant, Ellie Meyer, in a “beat up old suburban.” When Meyer discovered Arber was already an established printer, she told him Judd was looking to set up a print shop.

One presentation to the Chinati Foundation Board later, Arber received a check for the full amount he needed to set up a working print shop. Judd intended to print his own works with Arber and invite fellow artists to utilize the space. But because Arber was commuting back and forth from New Mexico, it was difficult to run the shop the way it needed to be run, he said. Arber and Judd collaborated on a couple of projects, but the artist died before his vision for the print shop could be fully realized.

One of the projects they were in the process of creating were the 20 woodcuts now on view at the Albuquerque Museum, which were only proofs until 2020 when the Judd Foundation decided to print a limited edition run — on the same Japanese paper which Judd selected — and put them up for sale. The set on view is a part of the 2020 limited edition run. The original proofs are in the Judd archives. The Print Building, which now houses Judd’s administrative offices, archives, and conservation studio, was originally conceived to serve as a space for Judd’s prints to be displayed.

Arber worked with Judd to proof the prints in the early ‘90s, which consisted of 20 woodcuts, or 10 pairs of like-colored prints. Each pair consists of an interior and exterior and a series of graphic lines. Arber worked from loosely-drawn renderings in pencil by Judd, which included scribbles about how to measure out the lines. The works, which have been rarely exhibited for public view, served as Arber’s introduction to the metric system and the aesthetic effectiveness of simple math.

“I got some metric graph paper and started laying it out and dividing, and it was like, oh my god, dividing 60 centimeters in thirds, how beautiful, simple,” said Arber.

Judd wrote out a list of 10 colors for Arber to use, including his signature cadmium red light and — the most difficult to mix up, according to Arber — cerulean blue. But the suite of Judd woodcuts isn’t the only artwork in the exhibition with an interesting backstory. A lithograph by artist Bruce Nauman, with whom Arber frequently works, titled Clown Taking a Shit, was originally titled Surveillance Clown — it only came to have such a literal title because Arber, Nauman and New Yorker writer Peter Schjeldahl, who were all present for the official naming of the piece, weren’t sure how to spell “surveillance.” These were pre-Google times, said Arber.

Arber has become good friends with most artists he’s worked with, he said. His collaborative relationships with artists most relate to a dance, where partners take turns leading, he said. As a printer he might lead by suggesting a certain technique, while the artist leads the creation of the actual imagery. Additionally, Arber spent time on a friend’s ranch in Taos and was well-versed in ranch lingo, which helped him relate to Nauman and Judd, who both owned ranches. A little booze never hurt either, he said.

“Shot of whiskey takes care of a lot,” Arber laughs. “A big part of collaboration is whiskey or tequila.” 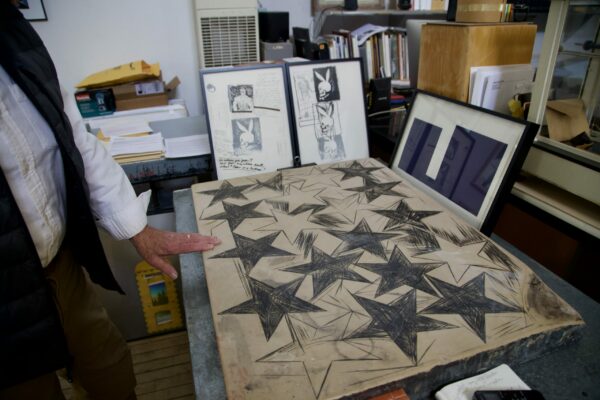 A 100-year-old stone in Arber’s studio which artists draw on with a grease pencil. The stone, which weighs around 300 pounds and comes from a specific quarry in Southern Germany, has been used over 1,000 times to create prints. After prints are made the imagery is sanded off in a thin layer over the course of three days. The stone’s most recent iteration became the work “Hawk Moths” by artist Charline von Heyl. Photo by Mary Cantrell/Big Bend Sentinel.

Arber’s studio on East El Paso street in downtown Marfa beckons visitors with a flag showcasing his printer’s “chop,” a chosen symbol identifying the printer, that may accompany an artist’s signature on a work. Arber’s symbol is a stylized tree, which pays homage to the origins of Arber’s last name and references the fact that a tree’s unseen roots are often as expansive as their limbs.

Tattoos on each of his arms showcase the chop. “It’s my mark,” he explains.

Arber’s studio was once a movie theater; he and his wife Valerie lived for years in the 600-square-foot projection room above the workspace. They first bought the building, which was suffering from a leaky roof, in 1998. The structure features unusually tall 18-foot-high adobe walls. Along with Arber’s printing presses, tools of the trade, works in progress, and vintage motorcycles populate the studio. His affinity for well-designed vehicles began when he worked as a clay modeler for Chrysler, sculpting life-sized cars out of clay in his hometown of Detroit. An eclectic mix of tunes, from “9 to 5” by Dolly Parton to indistinguishable bagpipe music, fills the space. 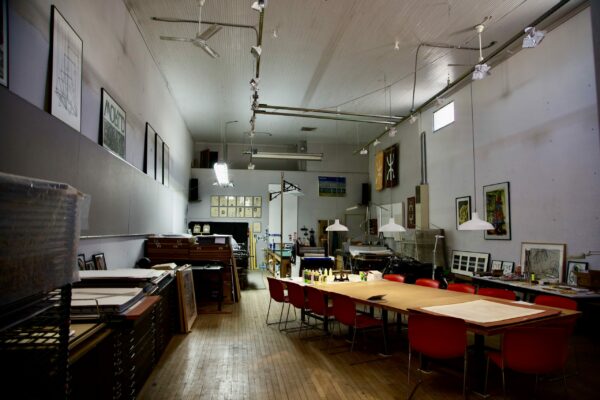 Arber mostly sells prints these days via visitors to his studio. Last week, a Terry Allen print, which recently sold, was laid on his large wooden table, ready to be prepped for transport. Arber established a partnership with the Chinati Foundation in 2003 called 30 x 30, for which artists-in-residence are invited to work with him to create an edition of prints. Past projects are on view in customized vitrines in his front-of-house gallery space.

In addition to being included in the Albuquerque Museum show, Arber has a number of current projects he is chipping away at in his studio. His willingness to try something new is evident in his ongoing efforts to create a print for filmmaker Sofia Coppola using a nontraditional fluorescent paint, and to build a 7-foot-tall, motion-activated Jacob’s Ladder for Brooklyn-based artist Rosy Keyser.

“I’m not interested as much in the past. I’m so excited about the next 10 years,” said Arber. “I’m tired but I’m not retired.”