The Power of Exhibitions: “The Language of Beauty in African Art” at the Kimbell Art Museum

by Megan Wilson Krznarich May 14, 2022
FacebookTwitterEmail

A presentation of some of the finest examples of African art from museum and private collections is a lofty endeavor. While it provides the opportunity to connect visitors directly to culturally significant objects, it can be challenging to expand the narrative surrounding such well-known works. Ultimately, this is the purpose of exhibitions — to contribute new layers of meaning to the artworks on display. This could be done through unpeeling layers, like an onion, to get visitors closer to the intentions of an artist or an artwork’s significance to viewers at the time of creation. Or, it could be done by adding another layer of interpretation, providing relevance to viewers in the present day. In the case of The Language of Beauty in African Art, the Kimbell Art Museum seeks to offer visitors a new lens through which to view these works, a lens that incorporates the perspectives and terminology of the communities of origin. When navigating through this exhibition, some additional terms came to mind regarding the significance of this show and its contribution to the appreciation of African art. 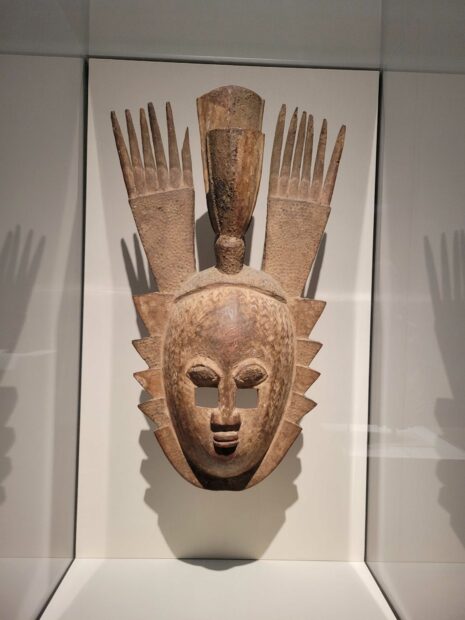 In 2022, the presentation of art by people of color must be done with intention and transparency. Visitors want to see institutions grapple with their role in perpetuating harmful systems and move the needle towards greater inclusion. Early in this exhibit, the labels acknowledge the historic curatorial practices of divorcing African art from its context and instead focusing on its aesthetic value, particularly the inspiration it provided for canonical European artists. Although colonialism is not directly referenced, this was precisely its aim: the deliberate erasure of histories and cultural practices permitted the imposition of new values for the benefit of the dominant culture. Thus, it is an important step forward for museums like the Kimbell, to acknowledge this legacy in the art world and take corrective measures.

The Face Mask (Epa Oloyiya) attributed to Ajere Elewa of Epe is a welcome example of such steps. This wooden mask is truly extraordinary, with its trapezoidal forms stair-stepping up the face of the mask, culminating in two large vertical combs flanking a bell. This comb motif, unique to the Yoruba, provides the mask with its name, Epa Oloyiya. Rather than lean into affinities between this work and the creations of Western artists, the Kimbell chose to highlight its historical function as a headdress used by members of the Are family for funerals and ceremonies commemorating ancestors.

The stated focus of this exhibition is language, specifically bringing forward the terms that would have been used to describe these works in their original communities. This approach truly places a magnifying glass over who gets to speak for these artworks, artists, and communities. Considering this exhibition spans works from across the continent with varying cultures and multiple languages, deciding which terms to highlight must have been a daunting task. The curators had to decide between organizing artworks by cultural groups and being very specific with selected terms, or seeking resonances amongst communities and using umbrella terms that speak to broader values or ideals. That second approach won the day in this exhibition. General terms, like balance and moderation, are used to examine the creations of many different peoples. Additional commentary on select artworks allows visitors greater specificity on a particular culture’s terminology and application of these overarching values. However, it becomes slippery to know if one is truly grasping the distinctions between each culture, and even each artist’s approach, or applying too broad of a brush by giving extended descriptions only to select artworks. 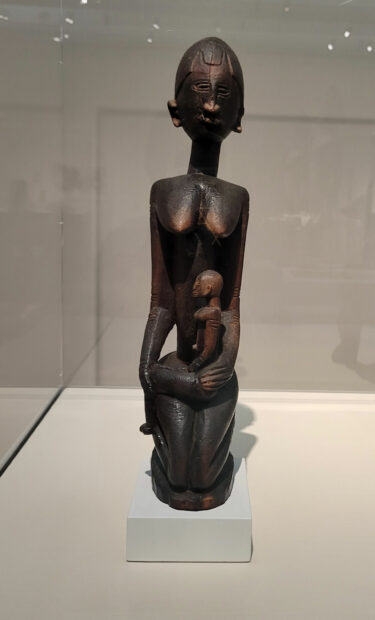 A particularly striking work is Mother-and-Child Figure from the Dogon people of the Bandiagara region in Mali. This is a narrow wooden sculpture, featuring a female figure in a kneeling position with a fully erect upper body. Facial features were carved with restrained depth to allow the sharply protruding breasts of the figure, and her maternal nature, to remain the focal point. The arms of the figure have bands of indentations that suggest scarification (a mark of beauty in some African cultures which is found in other Dogon sculptures), that lead down to a small child figure resting on the figure’s legs. Despite the rigid nature of both figures’ pose, there is a tenderness in this artwork. The mother’s hands are smooth where they cradle the child figure, and this section is where the sculpture’s sharp lines become rounded through the form of the mother’s legs that bend and cushion the child.

To help visitors reframe their default perspectives of mother and child works like this sculpture, the exhibition’s audio guide invites viewers to suspend associations with maternal tenderness. It instead discusses maternal archetypes in particular African cultures, like the Senufo community found in Côte d’Ivoire. For the Senufo, the nursing maternal archetype symbolized sustenance and transmission of knowledge. This provides an invaluable opportunity to dive deeper into the significance of these works for their communities of origin, and reveals a new layer of meaning.

However, the question remains whether the Dogon assigned additional or distinctive meaning to their maternal figures. This is also where the balance of original intention and current relevance comes into play. As a visitor of color, there was something refreshing about seeing a tender portrayal of Black motherhood. While it is certainly important to understand the historical meaning of these works, as restoration of cultural understanding is an important tool in dismantling the legacy of colonialism, it is also important to validate emotional connections with works that have too long been viewed through a detached lens of aesthetic comparison. 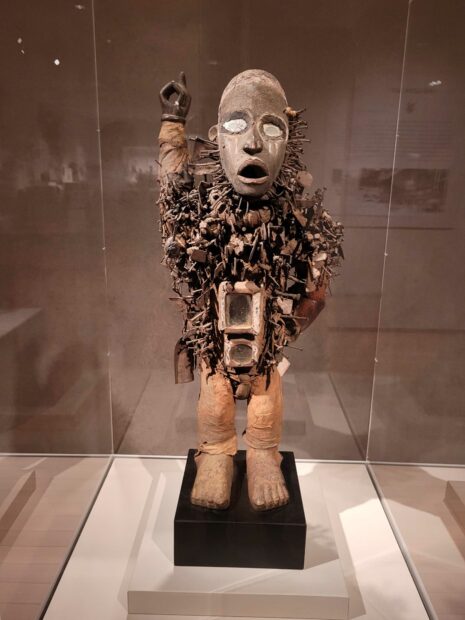 In the final section of the exhibition, there is an extraordinary display of minkisi and mankishi, powerful figurative sculptures from the Kongo and Songye cultures, intended to bridge the gap between the ancestral realm and the human world. Here, visitors are introduced to the Kongo term ngitukulu, referring to the awe-inspiring experience these works provide. The Male Figure (Nkisi Nkondi) from the Yombe community is a stunning example of this art form. The expressive figure stands with its right arm extended and one finger pointing upward. A sea of nails and flat scraps of metal radiate out from the body, added to activate the sculpture and invite spirits to inhabit it. On its torso, containers covered in glass hold a blend of materials, organic and created, that serve as a potion heightening the power of spirits inhabiting this work.

Power is a fitting place to close out this exhibition. How are museums activating their exhibitions to provide real meaning and benefit to their communities? What new commentary is being added to the mixture to enhance visitor understanding and connection? The artworks assembled from multiple public and private collections are indeed a powerful display of the cultural creations of many diverse communities on the African continent celebrating artistic excellence on its own terms. Of equal importance is the opening of space for important conversations about the legacy of displays of African arts in Western museums. This is an important moment in the art world. There has been recognition of how institutions perpetuate discriminatory systems of knowledge, but many museums are still grappling with how to move forward in restorative ways. This exhibition is one step forward, increasing transparency on how Western collectors and curators have exerted authority over interpretation of these works historically and encouraging new framing for the future. It also invites viewers to reflect on how that curatorial and institutional authority is shared, with visitors and communities of origin, in the present day.

The Language of Beauty in African Art is on view through July 31, 2022 at the Kimbell Art Museum in Fort Worth.