by Jessica Fuentes May 11, 2022
FacebookTwitterEmail

The Santa Fe-based arts and entertainment company Meow Wolf has announced its expansion into Texas. After hosting temporary immersive experiences in Austin as part of the South by Southwest festival, Meow Wolf’s next permanent projects will open in Grapevine (a suburb between Dallas and Fort Worth) in 2023 and Houston in 2024. 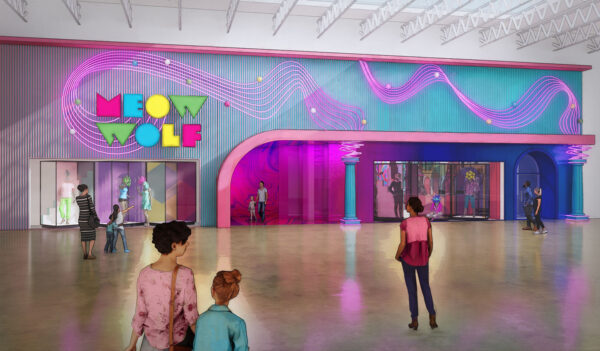 In a press release announcing the new spaces, Jose Tolosa, CEO of Meow Wolf stated, “The Meow Wolf story universe is expanding, and Texas holds the keys to our next chapters. Opening a permanent exhibition in the largest and one of the most diverse states in the country has been on Meow Wolf’s radar for years, and we are excited to be formally underway. The opportunities this state has presented have already become the touchstones of a vibrant, arts-centric portal of imaginative creativity.”

Meow Wolf opened its first space, House of Eternal Return, in 2016 in Sante Fe, New Mexico. Since that time, it has opened two other permanent locations, or “portals”: Omega Mart at AREA 15 in Las Vegas and Convergence Station in Denver. Meow Wolf counts a combined total of over 3 million visitors to its three sites.

Meow Wolf’s expansion into Texas comes at a time when immersive art complexes are thriving. In addition to the various Van Gogh experiences across the state, other, more localized efforts, like Hopscotch in San Antonio and the Color Factory in Houston have included and commissioned local artists. Nationally, complexes that are dedicated to museum-quality immersive art, like Superblue in Miami, have also gained prominence.

Dale Sheehan, Executive Creative Director of Meow Wolf explained, “We’ve never designed two exhibitions in the same state at the same time. The Texas experiences will be deeply rooted in artist collaboration and connected by concealed Easter eggs. Of course, the locations themselves are also creative prompts.”

He continued, “In Grapevine, we’ll be leaning into the energy of a shopping center [Grapevine Mills]—a nostalgic place for many of us, where families gather and young adults often find their first moments of freedom. In Houston, we’ll engage a burgeoning arts community in the most diverse city in the nation, which we believe will result in a groundswell of revolutionary artistic expression.”

The company plans to work with hundreds of artists both from Texas and Santa Fe to create these new spaces. Meow Wolf will begin recruiting artists and staff this summer. Those who are interested in contributing to or working at Meow Wolf should visit its employment website and sign up via the Texas Portals website.