by Barbara Purcell May 9, 2022
FacebookTwitterEmail 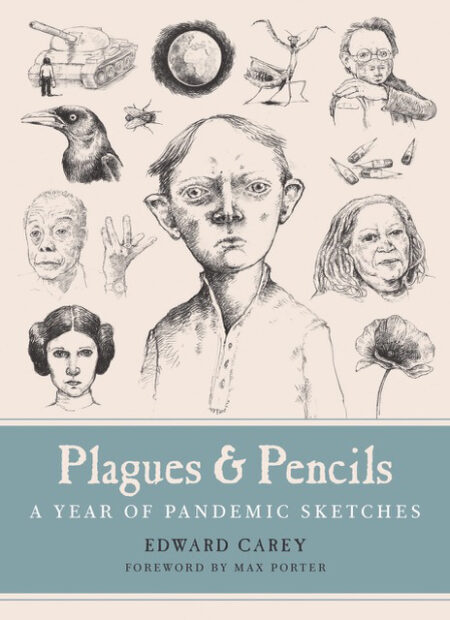 Cover of “Plagues & Pencils: A Year of Pandemic Sketches” by Edward Carey, © 2022, published with permission from the University of Texas Press

“There is something so comforting about a blank piece of paper and the lines the pencil can make upon it,” writes Edward Carey in his new book, Plagues & Pencils: A Year of Pandemic Sketches, which was released by the University of Texas Press on April 26. Carey, who teaches at UT Austin, is an author and playwright, and as made evident by the hundreds of drawings in this collection, a visual artist.

The book’s title is no doubt a reference to Plagues and Peoples, a 1976 bestseller that examined the global history of infectious disease and its effect on civilization. Carey’s book isn’t so much a history of the world as a story of his shrinking world; a daily check-in, drawing by drawing, during the first full year of lockdown.

In mid-March 2020, Carey returned (quickly) to Texas from a trip to his native UK, and settled in for the long haul of uncertainty with his wife, the writer Elizabeth McCracken, their two young children, and a recently acquired family cat. We first learn in the book’s foreword, penned by the English writer Max Porter, that Carey had been working on a novel before COVID, about Pinocchio’s father, Geppetto, who was trapped for two years in the belly of a whale and kept busy by writing and making art. Now, surreally, the author would undergo a similar process. 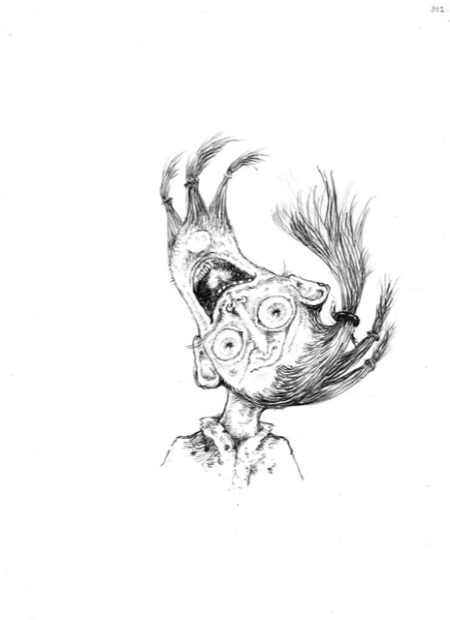 Day 352, “A determined young man, part seven.” Excerpted from “Plagues & Pencils: A Year of Pandemic Sketches” by Edward Carey, © 2022, published with permission from the University of Texas Press

From March 19, 2020 to March 18, 2021, Carey put pencil to paper as a way to cope, create meaning, and carry through on a simple promise: I’m going to do a drawing a day until all this nonsense is over he posted on Twitter and Instagram, along with his first sketch. Day 1, A determined young man, started out as a nose — as do all the faces Carey draws — and became something unto himself. (Carey assures the reader that it is not, in fact, a portrait of the artist as a young man.) Wide-set eyes, a tense mouth — the subject appears more vexed than determined; his expression demands something, anything, from this strange unprecedented moment.

Carey cranked out a few more drawings, mostly of famous Brits, before he began taking requests. Days 10 to 13 are organized on a single page, and feature a quadrant of John Keats, a brownie (mythic Scottish house troll), Medusa, and Charlotte Brontë. Other subjects end up earning their own page, such as Day 20, Self-portrait aged two, on my fiftieth birthday and Day 21, A plague doctor. Plague-themed pics, as one might imagine, occur early and often: Black Death, the Grim Reaper, Pesta the Plague Maiden. 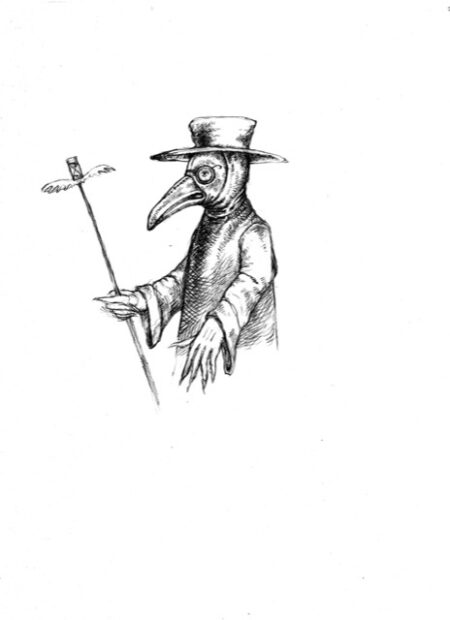 Day 21, “A plague doctor.” Excerpted from “Plagues & Pencils: A Year of Pandemic Sketches” by Edward Carey, © 2022, published with permission from the University of Texas Press

Shakespeare wrote King Lear while quarantined during a plague, Carey notes; this is one of those hopeful factoids that kept circulating early on in the coronavirus, as if a timeless masterpiece might emerge and restore humanity. As if isolation were a virtue. Unlike Geppetto, who remained isolated for two years in that bile-belly, Carey is inescapably aware of what’s happening out in the world, disturbed by the numbers of deaths, adding up to astronomical figures. And of the brutality, unrest, and rage — what he deems, “America seeing a hideously ugly portrait of itself.”

An essay ties together the year-long experience, written after the fact, with the author-artist weaving memory and reverie: reminiscing about the Thames at low tide; being in Texas, far too far from his elderly mother in England; jogging in Hyde Park, Austin while dreaming of Hyde Park, London; Kafka’s Hunger Artist; pacing animals in cages; and Hans Christian Anderson, whose family owned so little when he was a boy, that “everything, to him, had magic and meaning.”

A passage about Carey’s monotony, or, “monogamy” of materials, reads like a prose poem as he describes each drawing, done on a Strathmore Bristol vellum surface, 9 x 12 inches, 20 sheets to a pad. Only German pencil sharpeners (and erasers) were employed, he writes, as well as Tomboy B pencils from Japan — the perfect grade of B: “Like Goldilocks, I have tried many others, but all have failed to match up.” 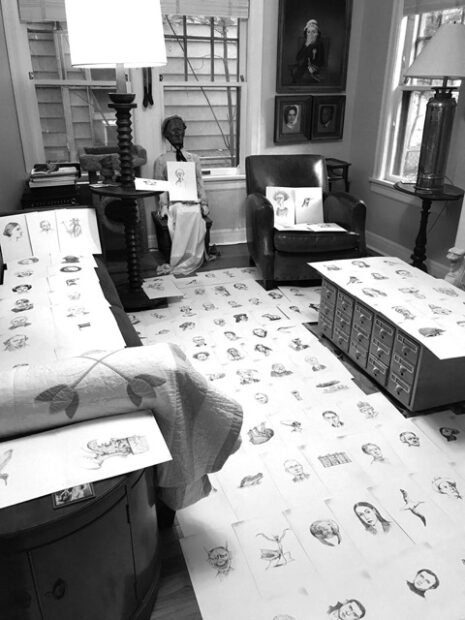 Day 365. Excerpted from “Plagues & Pencils: A Year of Pandemic Sketches” by Edward Carey, © 2022, published with permission from the University of Texas Press

Every 50 drawings, Carey would lay them out on the floor; included in the book are two photos of his portraits all but upholstering his living room. At Day 300, their weight was 15.5 lb, he notes: “An average one-year-old child weighs 19 lb. I think when I get to 365 drawings my pencil child will be underweight.”

Carey’s careful measurement of time, of mark marking, of material monogamy, is a strange comfort, uneasily recalling those quietly contained days (if one was lucky) early in the pandemic. Included are sketches of his pencil stubs (he kept them all) scattered throughout the collection. They haven’t been ascribed days like the other drawings; instead they are placed like ellipses between passages and images.

There were two times he almost stopped altogether: at Day 100 (A determined young man, part two) and during the Black Lives Matter protests, where he questioned his role as a middle-class, middle-aged white man, holed up in the middle of America. But then he decided to draw George Floyd: “It wasn’t just the pandemic any more, it was also America at war with itself.” 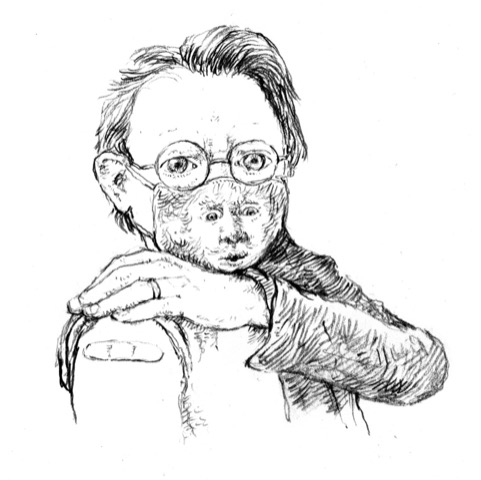 Day 365, “Self Portrait with second vaccine shot.” Excerpted from “Plagues & Pencils: A Year of Pandemic Sketches” by Edward Carey, © 2022, published with permission from the University of Texas Press

Madmen aside, many of Carey’s drawings have a gothic edge to them. We see it in his grackles, a dripping Giuliani, Mike Pence’s fly, Beethoven, and Bacchus on Mardi Gras. Day 35, Earth Day in quarantine, shows the planet enveloped in black amniotic fluid. Edward Gorey, Carey’s kinda namesake and macabre twin, makes an appearance on Day 341. Like Gorey, Carey’s sketches twinkle with moody decay.

Day 288, Goodbye to 2020, is death personified, clutching an emptied hourglass, incorrectly wearing his face mask, 2020 tattooed on his forehead like Manson’s mark — all while waving adieu. For parity, Day 289, Hello to 2021, is a chubby baby clutching an upright hourglass as a rattle toy.

Carey completed his final drawing — Self Portrait with second vaccine shot — on March 18, 2021, the day he received his second jab. To mark the occasion, both the vaccination and the one-year anniversary of lockdown, he drew a portrait of himself, masked, with a bandaid slapped across his deltoid. “The pandemic certainly isn’t over as I write, so I’ll keep drawing a while longer,” he notes.

Carey continued drawing, according to the epilogue, for 500 days, including three more iterations of A determined young man, whose head re-situates itself as the subject’s sanity is slowly restored. In the final image, Day 500, the young man bears a scar on his forehead — overtaken by a lunatic mouth in Days 400 and 450 — armed now with two bandaids on his arm.

Like the character Geppetto in his novel The Swallowed Man, published in January 2021, almost a year after the pandemic began, Carey learned to make do in the belly of the whale; making art and marking time. Still stuck, but with a little luck — and a lot of pencils — coming out the other side a determined young man.

Edward Carey’s Plagues & Pencils: A Year of Pandemic Sketches was released on April 26 and is available here and here.