by Garland Fielder May 6, 2022
FacebookTwitterEmail 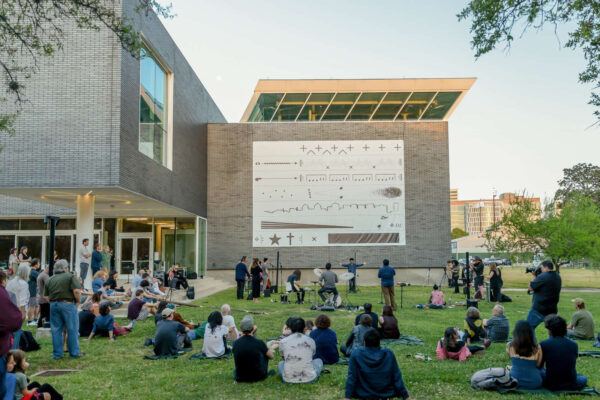 “Dimensions Variable” performance at the Moody Center for the Arts at Rice University on April 14, 2022

Performative art has the ability to activate an audience in a way inaccessible to the strictly visual realm. Of course, it is visual too, but its engagement to time is more discernible. You feel a performance unfold before you in a way you never feel a painting. The former is a living thing, subject to the capricious nature of time and space, whereas the latter is more of an homage to an endeavor. The motion-centric nature of performance can be infectious. It certainly was at the Moody Center for the Arts in Dimensions Variable: Raven Chacon + Nameless Sound. The performance was conceived as an interpretive engagement of the current exhibition, Soundwaves: Experimental Strategies in Art + Music. The various acts brought a sense of belonging and celebration to the audience, which became wrapt in participation. 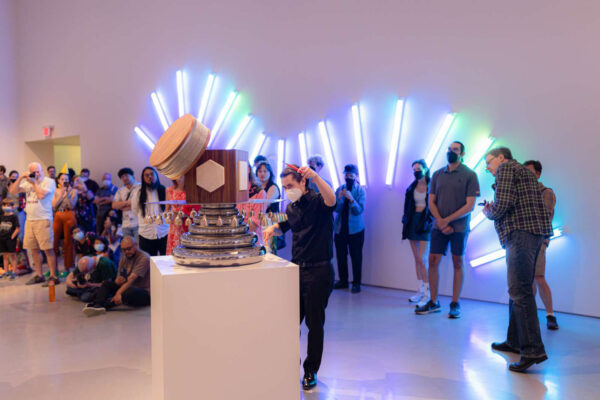 “Dimensions Variable” performance at the Moody Center for the Arts at Rice University on April 14, 2022.

The first performance consisted of a large ensemble of musicians arranged in a circle outside of the Art building against a huge backdrop of artist Raven Chacon’s graphic score, American Ledger No. 1. Conductor Sam Wu led musicians with the Shepherd School of Music and Houston-based Nameless Sound in an outdoor interpretive performance of the score. The term graphical score refers to the process of composing music visually based only loosely, if at all, on traditional score markings. A scale may or may not exist, quarter notes can flutter about, or any other symbol, as long as its graphic, may interject itself any time. Notions of rhythm and melody may or may not be present, along with codas and bass clefs, and maybe a whistle or two. The point is interpretation. Asking a musician to play such a score is an exercise in letting go of preconceptions of music; both the musician and the composer must embrace discovery rather than adherence, yet the performance was masterfully conducted. Having Wu conduct the musicians allowed one to easily follow the score. I know what they were playing even though the graphics were an open book of interpretation. It was a performance that created tension, sought moments of explosion, syncopated to its own logic. The music swelled and overtook the players themselves. It was clear all of them were engaged to a high degree in the performance, even though so much of it remained free. Gabriel Martinez hacked his way through a sizable log, and somehow the whole performance was synched to it. Some strange and excitable catharsis happened when he finally severed the log with his hand ax. 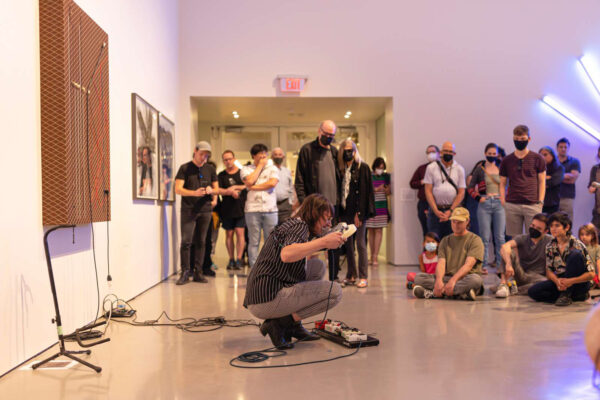 “Dimensions Variable” performance at the Moody Center for the Arts at Rice University on April 14, 2022

This performance then led to dancer Joseph Stevens, wearing Nevin Aladag’s Body Instruments, leading a procession of audience members across the building’s arcade and into the gallery space. His graceful and mysterious movements were accented by accordion appendages affixed to his arms, as well as by bells on his calves. He wore a small drum affixed to his head, like one of those stick drums you spin in your hands with tassels that whomp the skins. The overall ensemble reminded me of the Whirling Dervishes I had once seen decades ago in Turkey.

It is hard to describe how moving this performance was. It had all the trappings to come off hokey, but it was anything but. I was sincerely moved by Stevens’ dance and I can’t say exactly why. It had something to do with the procession quality of it — we in the audience were reduced to children blindly following the Pied Piper. His breathing and movement were tracked by the bellows, creating a minimal score filled with pulsing resolution. Peacock-like, Stevens would spin his head left and right, striking the drum in a haphazard, yet essential way. It was one of those rare instances when every aspect of the performance is vital.

The evening was capped with two other interpretive performances inside of the main gallery space. Whimsical and imaginative instruments were on display and two musicians engaged with some of those. Nick Finley performed on Aladag’s Resonator Percussion, a percussive assemblage of which Finley circumnavigated and brought to life through a measured dance composed of plucking and tapping.

Finally, punk guitarist Mad Whit activated Naama Tsabar’s Transitions, an amplifier/speaker ensemble hanging painting-like on the wall behind her. Whit, with a minimal effects set up, screeched and howled, literally, into her Gibson SG and summoned some sort of deity for sure. It was a fitting explosive ending to a stellar evening of performance and sound. The success of this performance will hopefully allow the curators at Moody Center for the Arts to continue to embrace the kinship between visual and performative arts, two genres Houston has an abundance of. The night definitely left an eager audience expecting more.

Soundwaves: Experimental Strategies in Art and Music is on view at Moody Center for the Arts through May 14, 2022.