LabSynthE and the Lazaret Cave: When Poetry and Paleontology Meet

An aerial photograph of the Côte d’Azur

Last month, I flew to France for my first solo trip in a long time, and my first European getaway. While I mostly had a wide-open schedule, the reason for the trip was pointed: a project, which I had submitted video and sound recordings to, was on view in a prehistoric cave in Nice throughout the month of March. This is the second year that the Lazaret Cave has participated in the annual national event, Printemps des Poétes (The Spring of Poets), which was launched by the French Ministry of Culture in 1999.

How did I, or any Texan (of which there were a few), come to be involved in this overseas project? The connective element is Frank Dufour. Professor Dufour, who has taught in universities in France and Morocco, came to the University of Texas at Dallas (UTD) in 2006, where he helped grow the Arts and Technology and the Emerging Communications programs. These, together, eventually became the School of Arts, Technology, and Emerging Communication in 2015.

In 2016, following the presidential election, Dufour and a group of graduate students (many of whom were international students who suddenly had concerns about their status in the United States), founded LabSynthE, an arts collective that synthesizes poetry, technology, and visual art. While Dufour accepted a position at the Université Côte d’Azur (UCA) in Nice in 2019, he continues to teach online courses for UTD. Since his physical departure, professor xtine burrough has taken on the role of LabSynthE’s Creative Director; Dufour continues to collaborate with the group from overseas.

As Dufour settled into his new role in Nice, he connected with Emmanuel Desclaux, a paleontologist and research associate at UCA who heads the Lazaret Cave, an archaeological site which holds evidence of prehistoric human occupation and is the property of the County Council of Meridional Alps. The cave, already equipped with speakers and video projection technology which is used to educate visitors and guide them through the space, was ripe for experimentation. Mix in both Dufour and Desclaux’s affinity for poetry, and the result was inevitable. 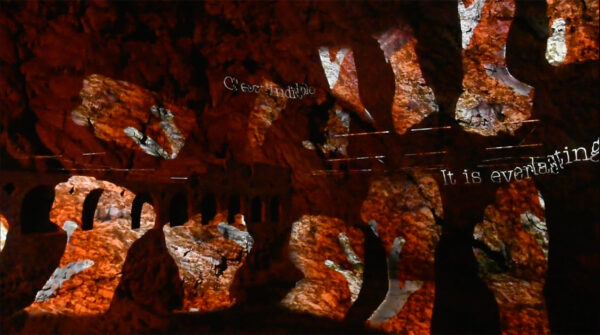 The two paired up in 2021 and worked with LabSynthE as an overseas partner to launch the first Lazaret Cave Spring of Poets installation. The project, Your Last Breath’s Desire, incorporated audio recordings of poems selected by Eric Freeze, a Canadian poet, and videos created by LabSynthE members. In a description of the project, the group wrote, “During our collaboration…we came to think of this work as a metaphor for the search of the paleontologist for animal and human lives through the maze of the Lazaret Cave.”

For the 2022 installation, Dufour invited me to join the collaboration, as the theme for the event would be “ephemerality” — a concept I explore in my own work. Over the course of approximately six months, I met with the LabSynthE and Lazaret teams virtually. Though we have all become familiar with virtual meetings and working remotely, for a project like this it was nearly impossible to grasp the whole of what we were working on without experiencing the physical space of the cave. So, when the opportunity arose to travel to Nice to see the cave and our installation, I was all in. 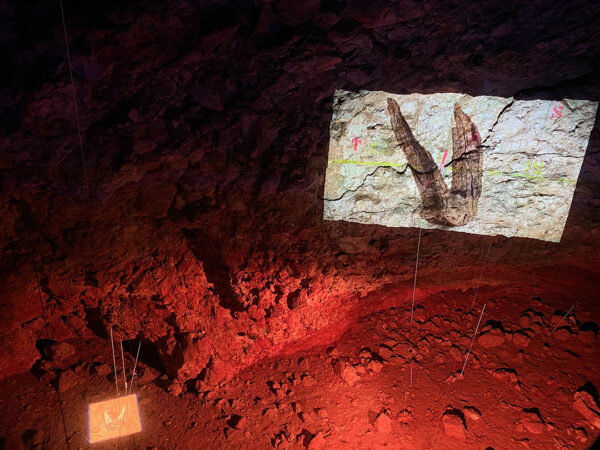 I spent one of my first days in Nice meeting the Lazaret team and experiencing the cave. As Desclaux sent me on a technology-guided tour of the cave, he explained the archaeological significance of Lazaret: “You’ve got several human occupations between 70,000 and 90,000 years. The bottom of the cave is dating around 200,000 years ago, and the top between 130,000 to 120,000 years old. And we have been excavating for 50 years, we’ve got 29 human occupations.” 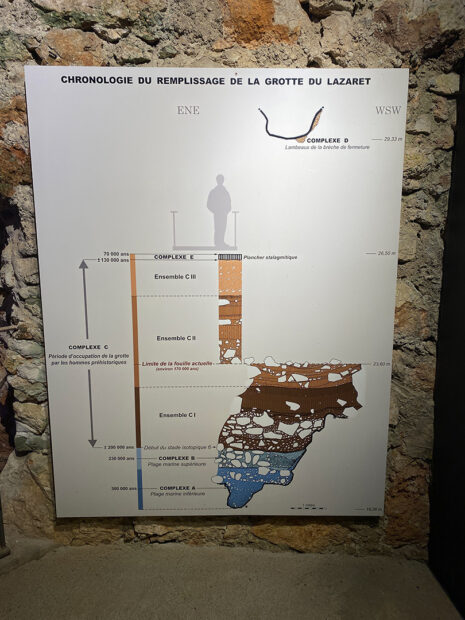 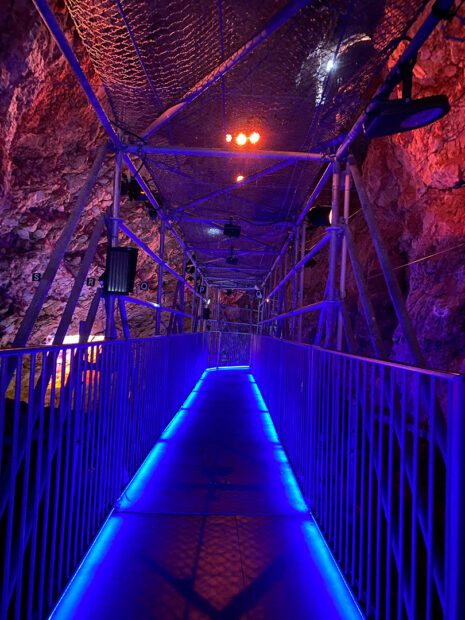 The interior of the Lazaret Cave

Throughout our conversations, Desclaux shifted easily from paleontologist to poet. Just moments later, he pointed out the blue lights that line the cave’s walkway and asked if I knew why he chose that color. My immediate response was that it relates to water and that the cave is near the sea. “No, because it’s a mood like in a cocktail bar during the night,” he replied with a full laugh. 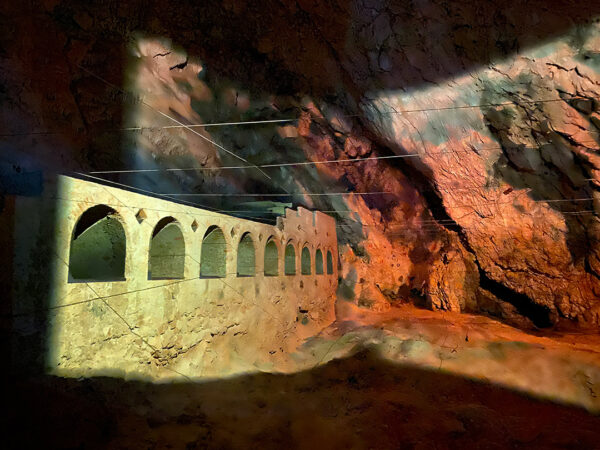 The back wall of the interior of the Lazaret Cave

I asked about some clearly human-made structures toward the back of the cave that resemble archways, and Desclaux explained that the 19th century owner of the cave, Dr. Le Fèvre, built a wine cellar in the space before realizing its archeological significance. He went on to say that the team involved with excavating the cave considered removing the structure to return the cave to a more natural state, but ultimately saw it as the most recent evidence of human occupation of the space.

After the tour and chatting for a while, Desclaux switched the cave from “prehistorical mood” to “Spring of Poetry mood.” The video projectors and audio components started up, and our collaborative installation transformed the space. The video, which incorporates submissions from various LabSynthE members, combines images from nature and city scenes with text and abstract components that, together, dance and spread across the visual plane. The audio combines ambient nature sounds, like insects chirping, with various clips of people reading a singular poem in various languages. The poem, “A Simple History,” by Adrian Matejka, was commissioned for this project. Inspired by the theme and the cave itself, Matejka’s work beautifully unites the archaeological with the poetic. 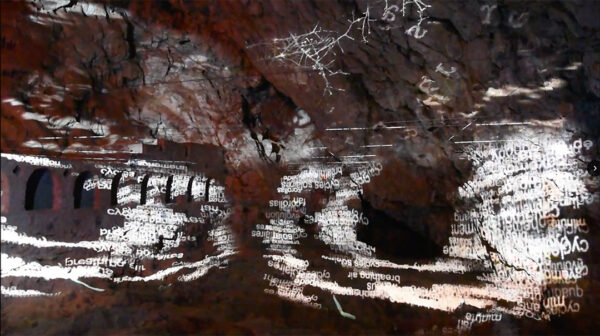 “A Simple History” by Adrian Matejka

Here’s the story on the cavernous wall: the quadruped
in me is sediment thick, glacially insistent. The homonym
in me is prehistoric & sloped with subsistence ideas.
Emergent, back bent in the long cycle of what we were
& might be in our thin minute here. We’re as evolutionary
as breathing air. We’re as ephemeral as the big bang
of scattered intentions, flinting our knapped headways.

In the safe cave days, the first tools blossom, corollas
Like a cycling sun — spread fingers, hands fanned out
Toward the yawning. It’s only like this for right now.
& then: cacophony of wants, their sounds of chip, fist, drum.
& then we are as biped as our thumbed imaginations.

Part of my journey to France was also about planning for the future. While in Nice, I met with French painter and digital artist Caroline Challan Belval. She demonstrated how she could place a digital artwork in the cave using a virtual reality app, which sparked ideas for how the collaboration between the cave and LabSynthE might grow in the future. Since those initial conversations, further discussions have unfolded with the LabSynthE team and ideas of hosting virtual reality components and video installations both in Nice and Dallas have been floated. Perhaps next March, Spring of Poets will take place simultaneously in each location.

Learn more about the Lazaret Cave through this free online book.