Bad Bunny Gets Lucky, a video work by Sarah Fox which was commissioned by the McNay Art Museum in San Antonio, but pulled two weeks before installation, will make its North Texas debut at Cluley Projects. 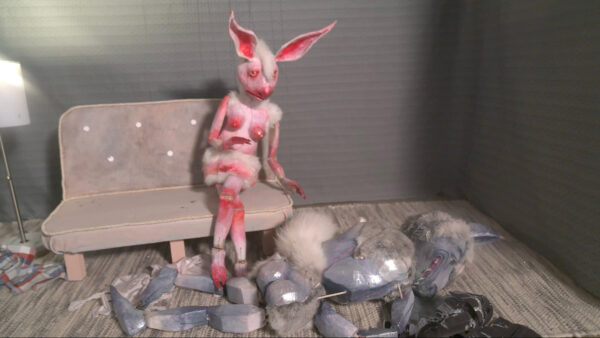 Following the McNay’s decision to pull Ms. Fox’s work over its sexual content, five additional artists who were originally invited along with Ms. Fox to be a part of the museum’s 8 Create exhibition removed their work in solidarity. All eight artists included in the show exhibited their work at the Blue Star Arts Complex in San Antonio earlier this month.

Bad Bunny Gets Lucky is a satirical piece that investigates traditional power dynamics using anthropomorphized animal puppets as main characters. Specifically, a press release by Cluley Projects states that the video is a response to Texas’ restrictive legislation on abortions passed last year.

Of the titular character, Ms. Fox said, “She is a dark and broken character, but ultimately a true survivor, brave, gutsy and hardworking.”

McNay’s loss is our gain. So glad Cluley Projects’ has its finger on the pulse. Can’t wait to finally see this exhibit.