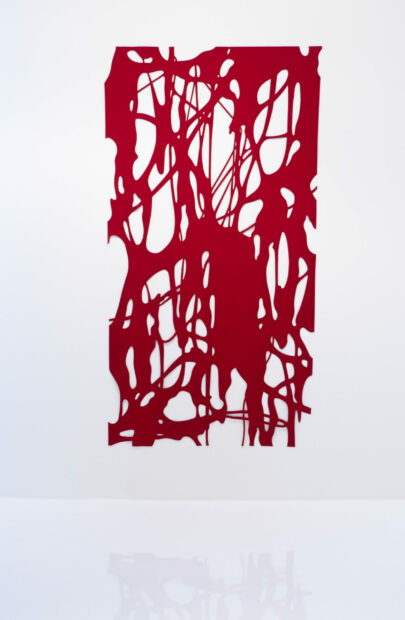 There is a language to Arturo Herrera’s artwork, a congruence of color and gesture that speaks to the interwoven layers of his practice. Constructed Collage, on view at Studio at Ruby City, is a presentation of Herrera’s prints, sculptures, paintings/drawings, and photography, all made between 1998 and 2019; sometimes, all in one work.

Technically speaking, Constructed Collage contains only one collage. But the show is rooted in the philosophy of collage, with the whole being greater than the sum of its parts. Caracas-born, Berlin-based Herrera began his career in the 1990s with collage, and continues to incorporate its most basic principles across a broad range of mediums.

“Arturo sees collage as the ultimate art form in this moment because we are constantly surrounded by images,” says Director of Ruby City, Elyse Gonzales. Gonzales points out that everything in the exhibition was either purchased by Ruby City’s founder Linda Pace during her lifetime, or gifted to the Linda Pace Foundation; as such, the arrangement within the gallery gives off a warm group dynamic. 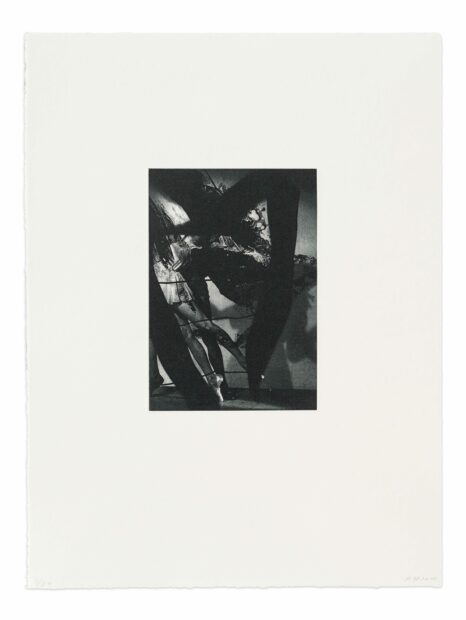 The show’s 15-plus works — including three series of prints — speak to one another in ways big and small. Pieces naturally click, regardless of whether they hail from the same set. The particulars of their placement (Herrera oversaw the installation via Zoom) creates a synergy between space and structure, not unlike what we see in the work itself.

At the entrance, Las Bodas [The Weddings] (2019) is a suite of eight prints that layer colorful silkscreen drawings atop sheet music to Stravinsky’s 1923 Les Noces [The Wedding] as well as a photograph of the production’s original dancers. A single crackle of yellow in the series signals a ripple effect throughout the show. A cut-out of the same color keeps its distance from a few feet away, while on the other side of the wall, Here (2000) takes that gnarl of yellow and trades it for hard right angles. (Its quadrangular cousin, a postcard-sized collage from 2002, hangs in the corner across the gallery.) 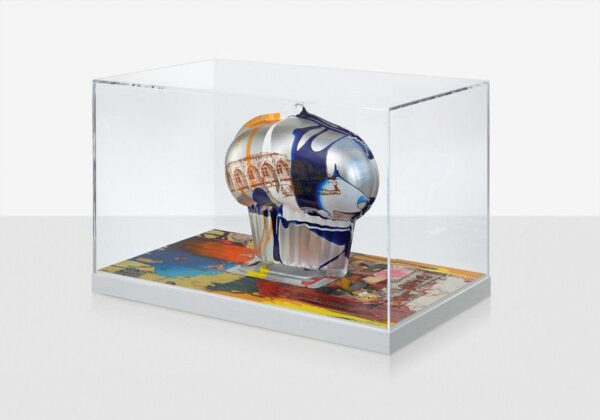 An encased sculpture in the center of the room completes the circuit with its own use of that yellow; each work involves a layering, or a cutting away, that balances the binary of positive and negative. Though abstract in nature, there is something familiar, and often figural, in the rhythmic lines of Herrera’s work: joyous, dancerly, tousled.

In addition to their energetic presence in the space at Ruby City, a site-specific wall painting in downtown San Antonio has also been included in the exhibition. Adam (2013) is 2,500 square feet of squiggle, its vibrant red in honor of Linda Pace’s favorite color, as well as a happy sentiment Herrera might share for the city, which he first visited as an Artpace resident in 2000.

Back at Ruby City, a red felt wall hanging from 2002 predates the artist’s outdoor abstract mural by a decade, though the two works are veritably cut from the same cloth. In the case of the wall painting, something has been added, and with the felt piece, that thing has been taken away. It renders the same outcome: a pas de deux of absence and presence.

It should come as no surprise that Herrera has an affinity for dance, which we see not only in his Las Bodas series, but also his suite of nine photogravures titled Dance (2014). Taken from a book of photographs of the same name, these images — which capture members of the Jean Cocteau Ballet circa 1947 — have been obscured by dark spells of shadow, making each print appear more like a film negative than a photograph.

“Arturo is trained as a photographer and he’s excised images from his photos to incorporate into collages,” says Gonzales. “Even though he touches on a lot of different mediums, collage is the basis of his acclaim and the basis of the work in this show. It all ties back — collage is a metaphor.” 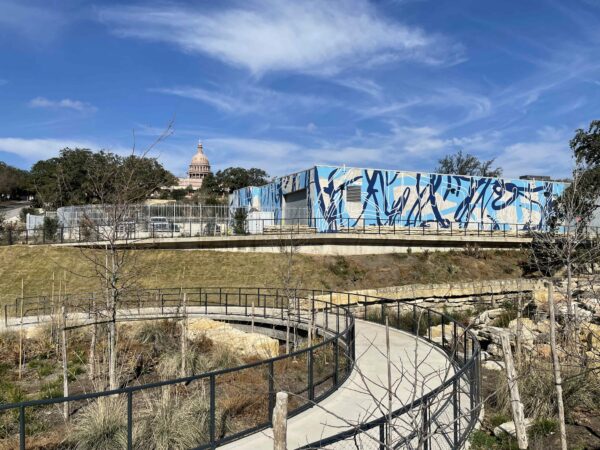 The metaphor extends all the way to Austin, where another abstract mural by the artist was completed late last summer. Wall painted for Austin is a 6,500-plus-square-foot installation that wraps around the Waller Creek Tunnel Inlet Facility, its hues of blues and white inspired by the surrounding city park. Tangles of acrylic paint play with the building’s exposed concrete, igniting that dance once again between positive and negative, absence and presence.

Of all the works in Constructed Collage, a small-scale installation titled Bang (2015), the one quietly encased in the center of the gallery, assumes the physical and philosophical center point of the show. An upright aluminum baking pan — in the shape of an oversized cupcake — sits upon a palette of explosive color, stamped with printed images and splotched mightily with paint.

From a few feet back, the monstrous cupcake morphs into a mushroom cloud and threatens to blow the whole thing apart — what the artist calls a “silent cacophony.” Herrera, no doubt, will sift through the fragments and create something new.

Arturo Herrera: Constructed Collage is on view at Ruby City through January 29, 2023.