The Ion, a new Houston-based tech hub built at the site of a former Sears Department Store, has commissioned installations by local artists Preston Gaines and Lina Dib.

The Ion building is part of the 16-acre Ion District, which spans 12 city blocks in Houston’s Midtown and is owned by Rice University. While some are enthusiastic about this new endeavor and see benefits for the city at large, others, particularly a coalition of Third Ward residents, community activists, and students, have raised concerns about the displacement of nearby Third Ward residents who are predominately Black.

In the press release announcing the inaugural installations, The Ion’s public art consultant Piper Faust explained, “As Houston, its neighborhoods, and the world-at-large open its doors again, a connector such as The Ion, is the perfect space to open up an installation of this scale. The Eye on Art Program isn’t simply art on a wall but installations that aim to entice, engage, and invite people into The Ion so they know it is a place where they can become part of a community, The Ion community.”

For the EyeOnArt Program’s inaugural installations The Ion and the Ion District Art Advisory Council assisted by Ms. Faust, selected Mr. Gaines and Ms. Dib from over 60 applicants. The works will be on view for six months in the display windows along Fannin and Main streets. These are just the first installations scheduled in what will be an ongoing, rotating program. 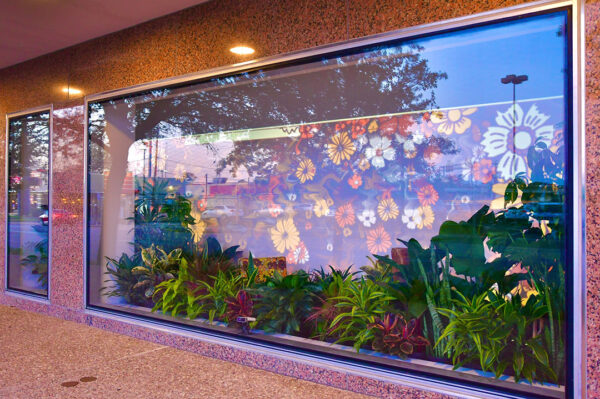 Preston Gaines is an architect, artist, and industrial designer who was part of the Round 52 exhibition for Project Row Houses. Mr. Gaines’ Fantasy Landscape is constructed with interconnected panels and features recorded sounds and vibrant pops of color. The multi-sensory botanically inspired work is intended to spark emotional, physical, and cognitive responses. 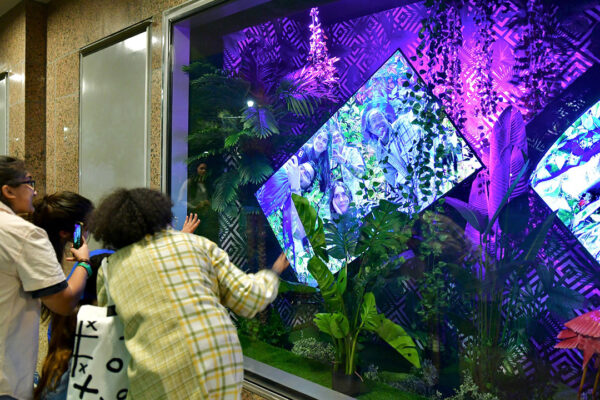 Born in Montreal, Lina Dib is a multidisciplinary artist and anthropologist who is currently a fellow and lecturer at Rice University. Ms. Dib’s Self-Portrait in the Garden is a constructed environment that includes plants, astro-turf, pink flamingos, and screens. In their resting state, the screens show images of landscapes, the ocean, and the sky. However, as viewers move through the space in front of the display windows, the images shift to show evidence of the viewers themselves. When viewers are still, then the images of nature return.