Spirit Lodge: Starr Hardridge and Connecting the Contemporary with the Traditional at the Dallas Museum of Art 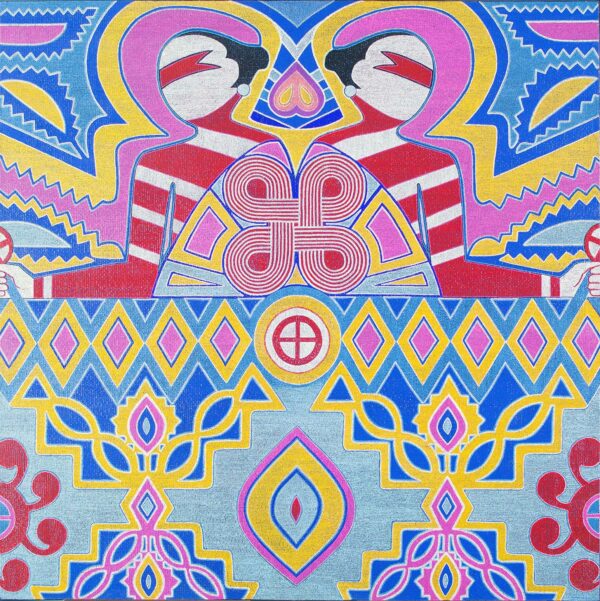 As an 18-year-old, Starr Hardridge (Muscogee (Creek), b. 1974, Denison, TX) had one of the formative experiences of his young life at the Dallas Museum of Art. While in town to celebrate the 90th birthday of his great-grandmother, an uncle took him to the museum which was then presenting a historic exhibition of Claude Monet’s Water Lilies.

“It just blew my mind,” Hardridge remembers of the Monet show, recalling it with a treasured fondness.

He hasn’t been back to the DMA since, but he is currently represented by two of his pieces on view in an exhibition which opened March 13, Spirit Lodge: Mississippian Art from Spiro.

“To think back then at the beginning of my career that I would have pieces showing in that museum, I would have never believed it,” Hardridge said. “It’s a dream fulfilled.”

Spirit Lodge presents nearly 200 ancient and contemporary works created by the Mississippian peoples and their descendants, of which Hardridge is one. The Spiroan people, along with other Mississippian groups across the eastern half of North America, created a world equal to that of the Aztec or Inca, consisting of vast trade networks and highly developed social, political and religious centers.

The Mississippian societies were distinguished by the construction of large earthen mounds, such as those found at Cahokia just outside St. Louis and Spiro, one of the most important cultural and ceremonial centers, located in present-day Oklahoma.

Despite being raised in Oklahoma, Hardridge was unaware of the Spiro site or people growing up.

“A lot of people in Oklahoma, they don’t know about those sites because we weren’t originally from Oklahoma. My tribe was removed from Alabama in 1832,” Hardridge said.

Hardridge would need to leave his home state to realize how his ancestors connected to Spiro. That deeper exploration began with attending the Savannah College of Art and Design in Georgia, closer to his ancestors’ homelands.

“I had the opportunity when I was at SCAD to go visit the Ocmulgee mounds, the mounds at Etowah, and started learning more about the pre-Columbian art that my ancestors were related to,” Hardridge said. Both sites are in Georgia. “They were created by ancient Muskogee people and they were involved in a network [called] the Southern Ceremonial Complex, which went all through the southeast, up through Appalachia and into the Ohio Valley region, the Great Lakes area. Cahokia Mounds was a big one and all these mounded cities were connected. Spiro was another cultural center that was related.”

Overlooked in the colonial retelling of Indigenous history is the degree to which the continent’s native inhabitants were connected. A primary reason for this was to diminish the sophistication of the cultures that existed on the land prior to Europeans’ arrival.

What resulted in all this material being sited together is equally fascinating. In about 1400 CE, during a climate change crisis, these thousands of ritual objects from across the Mississippian world were amassed as offerings within a hollow chamber at Spiro called the Spirit Lodge.

The Kansas City Star, in 1935, called the site’s discovery a “King Tut’s Tomb in the Arkansas Valley.”

By that time, however, looters had already found it, causing irreparable harm to the location. Subsequent professional archeological evacuations surfaced what remained, but then the objects were disinterred and scattered to private and public collections across the nation.

Spirit Lodge reunites a range of items found at Spiro that have not been together since their initial removal.

Hardridge applauds the exhibition’s organizers for their close consultation with the Caddo Nation and Wichita and Affiliated Tribes, the descendants of the Spiroan people, throughout the curation of this show. Still, he offers a chilling reminder.

“Those objects were dug out of the earth without permission from anybody. Somebody came along and dug up somebody’s grave from 1,000 years ago, which is wrong. All that stuff belongs back in the earth,” he said. “But, it happened, and we would never know what those people look like or what their lives were like if we didn’t have those objects to look at. There are a lot of contemporary Native artists in Oklahoma who use that imagery in their own art. Someone like myself can use it as a jumping off point to have perspective, to create something new, to have a foothold in their identity and make a new statement through the arts.”

Critically, Spirit Lodge presents contemporary art like Hardridge’s in combination with the historic, reminding audiences that the descendants of Mississippian people and their cultures persist. As a descendant, Hardridge honors his ancestors’ creativity without parroting them.

“There are influences of that art in my art, but I’m a contemporary Native living now and I’m taking things from a lot of different genres and creating something completely new,” he said. “Even the way that I’m creating art is different because I’ve adopted a new style of painting that takes the paint out of the context of the brush.”

Hardridge’s Cosmic Twins — he himself is a fraternal twin — which appears in the show exemplifies the style for which he has become best known. The large acrylic and plaster on canvas painting from 2016 demonstrates the finished product of his unique mashup between Indigenous beadwork and pointillism.

“Late 2014-2015, I made a complete departure from traditional painting. Up to that point, I was an illustrator, I was painting realism and Western imagery,” he remembers. “I became more involved in researching my personal history, my personal family history and background, and I became particularly fascinated with southeastern beadwork, Cherokee and Muscogee bandolier bags specifically. In Oklahoma, I never saw Muscogee Creek beadwork because it didn’t exist, it was all left back east and ended up in museums. When the southeastern tribes came to Oklahoma, a lot of them lost their beadwork traditions.” 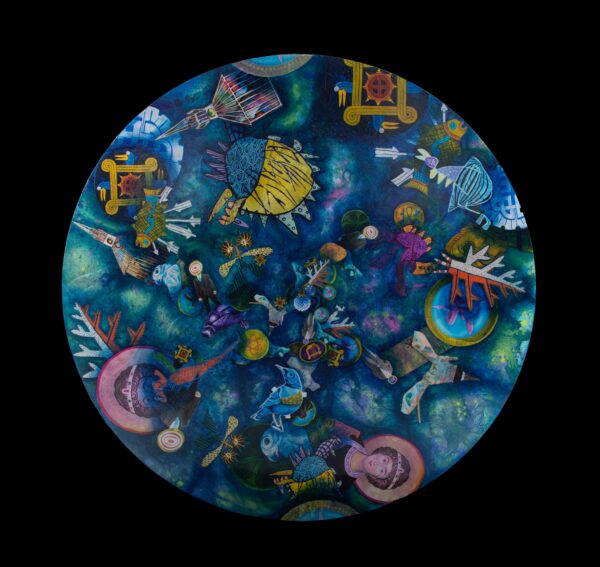 Fascinated by beadwork, but a painter by training, Hardridge started thinking about pointillism as a bridge.

“I studied pointillism in school and in Europe, I’d seen the works of Georges Surat and [Paul] Signac,” he said. “I was a deep student of color theory and optical mixing, so I decided to take these principles and literally apply them in this assemblage of colored dots. I had seen all the contemporary Native artwork out there and I knew that no one else was doing it — or no one else was quite crazy enough to attempt something like this because it’s painstaking, it takes a long time, but I knew when I finished the first painting it all came together and became a really solid concept.”

He has pursued the style ever since, to the detriment of his eyesight, which has worsened significantly ever since he adopted the practice, which requires hours of intricate paint application inches from his canvases.

With a background in decorative painting, Hardridge further innovated his style by using black venetian plaster as his base, due to its ability to lock paint onto the surface. (Also, the plaster he uses is composed with acrylic polymers, which allows it to maintain flexibility.) He embeds plaster wall mesh — similar to what’s used in drywall — into the plaster itself, pulling it up while it’s still wet to create a grid. This grid serves as the guidelines for his dots.

“I [put down the] plaster, I put the mesh in, I pull it up and see the grid, and then I do a skim coat over the top that [makes] it more smooth, but I can still see the grid and I do my drawing and then start color blocking,” he explains. “Bead workers, a lot of times, use the same type of grid. They’ll take a gridded piece of paper and put it on a piece of rawhide or leather, and they’ll bead right over the top of it with their image on there. The grid helps them to organize all their beads and keep everything in straight lines. I adopted the same principles and it worked exactly the same.”

Despite representing one of the United States’ most important ancient Native American sites, as well as an archaeological find unmatched in modern times, the Spiro people are nearly forgotten. Spirit Lodge provides an opportunity to learn more about the legacy of Native peoples and connect that legacy to living Indigenous communities through exploration of the archaeology and history of Spiro and its relationship to other contemporaneous Indigenous communities in North and Central America.

Organized by the National Cowboy & Western Heritage Museum in Oklahoma City, this groundbreaking exhibition marks the first and possibly last time these works of art and cultural significance will be reunited from various collections across the country.

The honor of participating is not lost on Hardridge.

“I’m showing alongside ancestral artists that were significant 1,000 years ago, looking back with the perspective of a modern artist living today,” he said. “I get to talk to my children about these things and now I get to take them to Etowah mounds (150 miles from where the artist and his kids live in Knoxville, TN), talk about the history and art; they’re the future eyes that will have a completely different perspective 10, 20 years from now.”

Perhaps a future artist will see the Spiro show in Dallas and be similarly moved, the way Hardridge was almost 30 years ago by Monet.

The Dallas Museum of Art is the third and final venue for Spirit Lodge: Mississippian Art from Spiro. The show will remain on view through August 7, 2022.

I’m certainly not an expert in Mississippian art. I don’t know a lot about raptors. I do know a little about psittacines. The Raptor with human head effigy pipe in this article looks like a parrot to me. I just can’t see a raptor there. Parrots have a thick muscular tongue that they use like a thumb. If you watch them eating or manipulating objects you will see it sticking out there. Between the shape of the beak and that tongue I find it very difficult to see anything but a parrot. A Carolina conure was native to the US southeast until the early 1900’s when it became extinct. The thick billed parrots are native to Texas, and of course Macaws were imported to the American Southwest. It’s probable that Native Americans in most of the US were quiet familiar with parrots.