Balenciaga’s Winter 22 Collection is a Poem for Ukraine 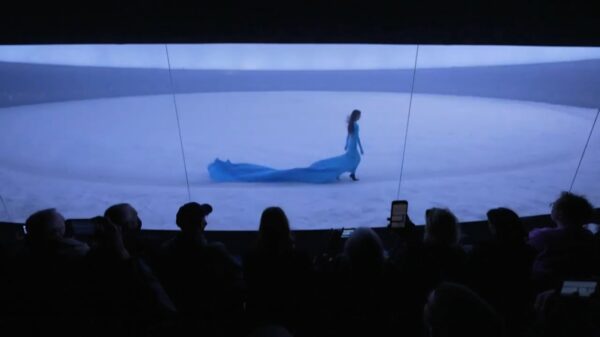 Eliza Douglas models a gown for the Balenciaga Winter 22 Collection

Balenciaga, the French fashion house (which is owned by Kering) presented black austere wear for March 6’s Winter 2022 collection. The visual of the runway, awash in arctic powder (fake, by the way), was beautiful on its own, a potent symbol in March. By this time of year, the snowier parts of the world are exhausted by the trial they have been put through all winter. March is supposed to be the apex of how bad things get. In this show, the sun is still gone.

The first segment of the show was soundtracked by a piano piece, “Slavonic Dances in E Minor” by David Kadouch, which played as incredibly tall people struggle to take out their trash bags (and sometimes real bags). The latter segment was a hardstyle medley by BFRND, the musician responsible for composing the auditory component of Balenciaga runways. This is, perhaps, a more contemporary musical styling within fashion shows, but it is also classic. The aged excellence of the silhouettes that Cristóbal Balenciaga, the fashion house’s founder, is known for are pitted against the harsh extremes of the cutting edge of culture. The circular runway created sweeping angles meant to showcase the models and their garb. The audience, seated behind glass looking into the fake tundra, was positioned to be either unfeeling or entertained by the ensemble. We watched the models carry their trash, through a storm, with sullen faces. Demna Gvesalia, the house’s creative director, dealt in the starkest of contrast, yet the procession felt seamless.

In the collection’s 69 designs, an almost never-ending cast of characters trotted stoically across the ice. There were jet-setting elite, haughty priestesses, and unclothed vagabonds. The grouping of archetypes was truly shocking to see in this setting, the two constants of the show being black clothes and trash carried in lumpy parcels. My experience watching the characters unfold as they trekked across the frigid circuit felt nothing less than spiritual; Gvesalia had created an astounding cinematic achievement, layered over the clothes. The day it premiered, I let it play on loop dozens of times, and I cannot stop rewatching it now.

With much good art, there are incidental angles that inevitably come to the fore. Gvesalia alleges that the show was initially designed as a commentary on the precarity of our planet’s climatic systems; a statement about how snow may soon be only seen in artificial reconstructions. However, the ongoing invasion of Ukraine by Russia has imposed another reading. Gvesalia addressed this by broadcasting a poem by Oleg Olegarsky at the beginning of the show, and the final two looks created a deconstructed (and gendered) presentation of the Ukrainian Flag. Eliza Douglas, who modeled the final look for the show, a light blue body con gown with a svelte train, posted to Instagram to say that her payment for the runway would go to the World Food Program, “In support of Ukraine”.

At this point, I have heard a few people complain that not everyone needs to weigh in on something as contentious as an armed invasion of one nation by another. War is serious, and many of us do not know anything about or anyone from Ukraine. The decision to comment or not comment on what is happening is now a constant, because the 24 hour news cycle has become global.

Surely, this expectation of thoughtfulness is sensitive territory in itself. What kind of expression is appropriate? And when should that appropriateness be challenged, or complied with? Ahead of these criticisms, I feel as if I should invoke the words of someone with a closer perspective to the war crisis.

Karolina Żebrowska, a Polish fashion YouTuber, recently posted a teary video diary to her channel, stating that Eastern Europeans carry generational war trauma with them, and that the influx of refugees across the region has proven that pain to be more than emotional. Words and images about the humanitarian crises are being published by every press outlet. Zebrowska articulates the hierarchy of attention to the crisis quite plainly:

“I think it’s okay to call out the government for, you know, being picky in who they decide to help, or call out media for not covering different topics equally. But to attack, like, regular people for caring, I just think it’s stupid.”

Gvesalia has been criticized for tacking on the Ukrainian aesthetic to the end of his show, which would have been in the planning stages months prior to the first Russian bombing raids. What else could a fashion show be, but a blatant display of narcissism? A genius who has a lot to say, and finds the world’s elite to wear his gowns.

It would be foolish to assume how the deconstructed Ukrainian flag will be read in the future. Gvesalia’s vision was to build an elaborate set to showcase winter as a metaphor for trauma. That metaphor is not overtaken by the Ukrainian conflict, but rather it is augmented by it. The Creative Director has nimbly maintained the integrity of the message while responding to the present moment. I can’t look away.

50 Years of Curated Fashion On View in...

bro. someone from texas walked this show.