Bringing an Anvil to Band Practice

Today is my son Max’s forty-first birthday. It was twenty years ago today that George Harrison died.

When Max was a new born he had to spend a week in Brackenridge Hospital in Austin with a staph infection. He had to have an I.V. He was so new it could only be attached to his forehead. Secured in this way, the gear seemed so outsized, so mean, compared to his tender tininess.

We were too involved with Max to notice the news the night of December 8th, but the next morning at 6 AM, when I went downstairs to get some coffee, there it was, in bold, black, five-foot-ten letters, on the front page of the Austin American-Statesman, a headline — JOHN LENNON SHOT DEAD.

The coffee shivered from the vibration of the up elevator — a tremble signaling fragility. My newborn child had existed simultaneously with John Lennon for one week, passing in a revolving door of life and death. The coffee we would drink would be easy to replace.

Some forty plus years later, I recalled all the tech in the hospital room as a maze of interference, things that were in the way of just getting close to my son. It was for his survival, but in contrast to his fresh being, it seemed wrong, like distilling joy with anxiety; like bringing an anvil to band practice. 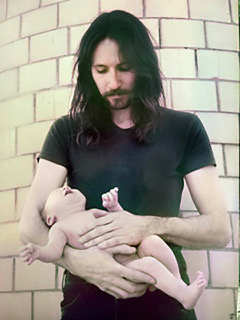 “The human mind can imagine nothing which has not really existed.”
— Edgar Allan Poe

In other words, there’s nothin’ you can know that isn’t known.

In the film, Get Back, as The Beatles make bricolage out of cobblestones, viewers may bear witness to how serious art can come from casual play. Personal background matters and doesn’t matter. The sequence “when we stand up, we get too excited” is a giddy treasure. And John’s goo-goo eyes reminiscing about trying to act nice for the maharishi is so, well, John. I loved the wandering camera that catches a meter maid giving a parking ticket to Ringo’s car in a scene right after the “freak out.” Thank you, Rita. Then there is the sequence featuring Mal Evans, The Beatles road manager, in which a large anvil appears in the room, referred to by Paul as “Mal’s instrument.” 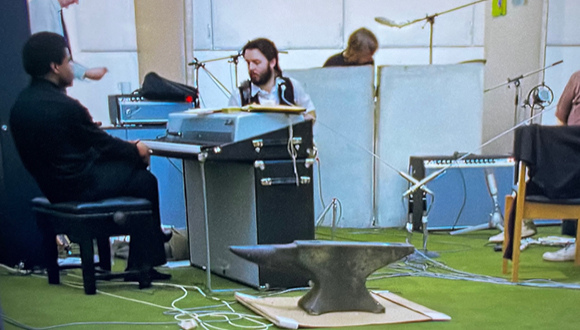 The Beatles at Band Practice

In between the first two installments of Get Back, which was released as a three-part series, we ventured to Albuquerque to see Spencer. So, Get Back, then Spencer, then more Get Back. Without meaning to, we’d practically set ourselves up for tea at four. This carried on, even in the credits for Spencer, which reveal that the actors who played Diana’s sons are named Farthing and Spry, as if they had sprung from some English nursery rhyme.

Seeing Spencer was an experience akin to some kind of shedding, even healing, like when art is so good it reaffirms everything that has any worth. At the time I told people that missing this film would be a life error. It is way beyond notions of “good movie” or “good acting.”

The power of the film has mostly to do with things other than the story of Lady Di. The sound design; some Kubrickian horizontal tracking shots of opulent interiors; a bulimic nightmare laced with giant pearls. A whelming tide of audio and image — I can’t begin to contain or recall it all, there is so much.

The sound called to mind Mica Levi, who did Under the Skin and Spencer director Pablo Larraín’s previous film, Jackie. But this time round, in Spencer, it was Jonny Greenwood (The Master, There Will Be Blood, Phantom Thread, The Power of The Dog), who I have on my list of beloved movie soundtrack creators, right next to Levi and Buckethead.

At every turn, the royal family seeks to keep Diana hemmed in. Even quite literally, with poshly printed tags on her clothes indicating when they should be worn. This “keeping things in their place” is deftly suggested in the small scene near the end of the film in which Major Alistar Gregory, Diana’s watcher, replaces the Ann Boleyn bio that has been her go-to reading in its designated slot in the bookcase. His expression is so officious, so tidy, that the bookcase practically gets a bow tied around it. The same character had previously appeared in the walk-in pastry closet, interrupting Diana’s frustration gorge, letting her know she would always be under someone’s eye.

There is a beach scene in which Diana’s dresser, Maggie, reveals the depth of her feelings for Diana — I noticed during this sequence that two blokes dressed in fox hunting gear on the first row in the theater adjusted their seating so that a seat separated them.

Having seen Spencer the day after Part One of Get Back, I could not help but recall, any time the royals appeared on the screen, John Lennon’s commentary when The Beatles played for the Queen and her entourage in 1963. On that occasion, John introduced the band and then said, “The people in the cheaper seats, clap your hands. And the rest of you, if you’d just rattle your jewelry.”

When we went to see Spencer, I was feeling pretty closed in, isolated, some loose ends were bugging me and I was just really aware of a personal outline that felt kind of suffocating. Call it Covid malaise if you want to. The film dissolved all that. We sat in total silence, crying a little all through the credits. The tears were for the tragedy of her life, sure, but it was also from awe delivered by a stunning film. No one else stayed. It was sparsely attended in the first place, but after the handful of people we were sharing the theater with began to leave, we were allowed to really stretch into the intimacy of the feelings.

We had gone grocery shopping right before the film, so afterwards I stopped at the Circle K across the street from the theater to get some ice to keep the food cold. There was a guy in a rolling walker checking out in front of me. He waited for me outside and when I came through the door, he asked me a question:

“Where are you from originally, the mountains in the east?”

“I know a welder from Lubbock. Really nice guy. He’s a giant like you. How was your Thanksgiving?”

“Ours was good too, but we missed our son — he was run over on Alameda Boulevard on November 3rd, three days before his thirty fifth birthday.”

Then he squeezed my arm and said he had to go. It felt like he was tuned in to what the film had done to me. I had no membrane, no separation, was a completely open heart, walking around on two legs. This was so obvious to him that he felt like he could share his pain in that way with a total stranger. The feeling of that and the effect of the film lingered for a long time. I can still feel the glow.

Wow. Exceptional. And yes- that film (even when watched from the couch with a stomach bug) was more than impactful. As is your writing and recollections.

Thank you, Hannah. Happy to know you have enjoyed this piece and Spencer. Would also recommend The Lost Daughter. On the Beatles side, check out a piece that came out in the New Yorker today. A lot of it is stuff heard before re the early days, but there are some key details provided. It’s a great read.