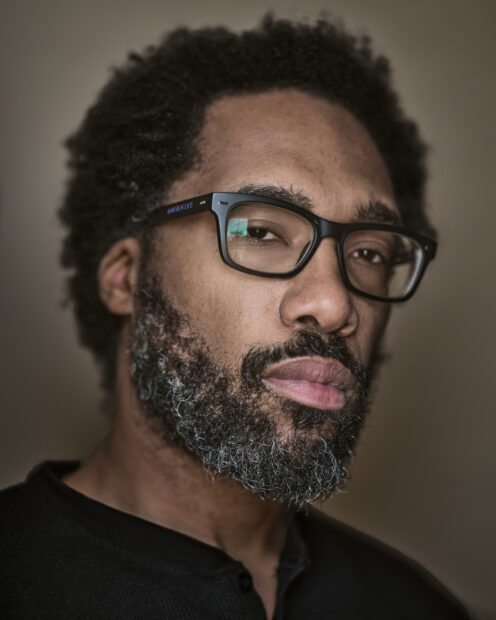 Recently, artist, educator and writer Anthony Francis graciously welcomed me into his downtown San Antonio studio for an interview. Francis teaches at Texas State University, works in commercial and editorial photography, and explores the politics of representation and autonomy in his personal portraiture work. In addition to photography, Francis writes poetry as another form of creative expression. I sat down with Francis to talk about the evolution of his practice, the ambiguity of signs, and his recent work that is included in the 2022 Contemporary Art Month Perennial exhibition.

Francis regards his studio as a place of gathering and coming together with people — friends and strangers alike. In his photography, emphasis is placed on exploring the internal politics of portraiture, wrapped with tension and imagination. One of Francis’ projects that stood out to me is titled Real Lyric, created in 2015 after Francis received his MFA from The Academy of Art University; the project intimately depicts self-reflection through the image of those close to the artist. In the last two years, Francis has completed over 30 new works and is aspiring to make 60, with future plans to complete an art book and have a solo show. Above all, Francis wants to continue to make new work. 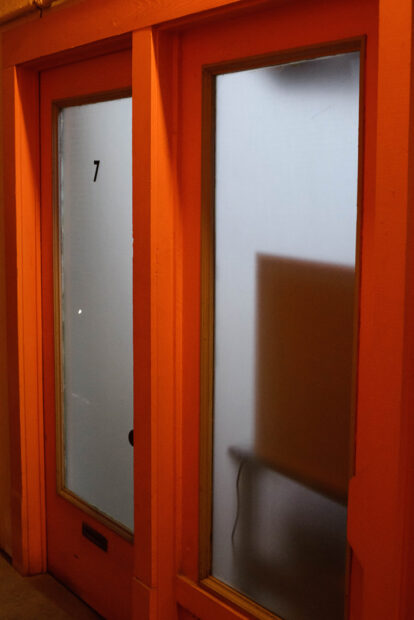 Ashley Allen (AA): How long have you been writing poetry, and do poetry and photography express meaning in similar ways?

Anthony Francis (AF): I’ve been writing poetry for a long time. I started in middle school which allowed me to really understand the similarity between how poetry and a photograph work. In fractions of a second they are figurative, metaphorical, and pithy all at once. I feel like I’m in a writer’s groove and not so much a visual artist. Poetry depends so much on your imagination and metacognition and that’s the way photographs work too. It is more about what the symbols mean than how they provide evidence of anything. Signs and symbols function similarly in poetry and photography.

AA: How has your conceptual work evolved since your initial Real Lyric project?

AF: Real Lyric was about having an homage to people that I cared about. It was a really rigid project conceptually because it involved the use of mirrors where I was taking both a straight portrait and a self portrait at the same time. I wanted to explore the idea of symbiosis between myself and the sitter as a kind of love letter suggested through the photographic language of juxtaposed bodies and forms. What I’m working on now is a progression of Real Lyric because it deals with the ambiguity of portraiture in some ways. Since grad school, almost everything that I read has to have a subscription to Black feminist thought, and so my work is really functioning in that space. I’m also thinking about the issues concerning photography — the fact that it decontextualizes, but we should also think about photography as recontextualizing as well. It will take something from where it has been and then at the same time become definitive in whatever concept that you apply to it in some ways. I like to think of the idea of art as past tense because I am always running into new ideas and constant discoveries.

AA: How did it feel to have your work acquired by the McNay Art Museum after it was exhibited there as part of the 2020 Contemporary Art Month Perennial?

AF: I felt good about it. Of course, the thing is, we are in the heart of performativity as it relates to institutions at this very moment. Institutions are suggesting that they love artists more somehow or have always appreciated us, especially Black artists and artists of color. SAMA was doing an acquisition, so why wouldn’t the McNay do an acquisition now as well? Everything is weird, so it was weird and it was good. And that’s kind of where I think the artist is all the time. Especially artists like myself that photograph people. It’s a political space, and so there is community in this gathering and then there are also some more difficult things that I have to negotiate within myself morally. 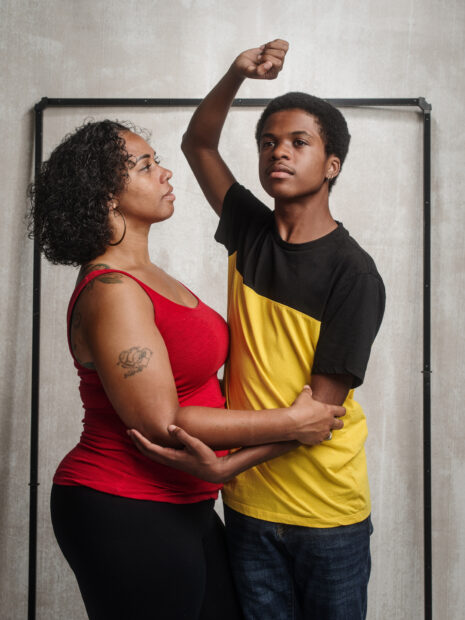 AA: What were you thinking about when you created the works that are included in the 2022 Contemporary Art Month Perennial?

AF: When making this work, I was thinking about blackness and a way that I could photograph Black people. There are a few things that I’m thinking about when I think about photographing Black people. One is that when people see photographs of Black people it becomes what we see as pejoratives. And my work becomes Black work because I’m photographing Black people when in actuality, a portrait is a photographic description of a person. I’m not trying not to photograph issues of Blackness. What I’m saying is that some of the politics of portraiture begin with its definition in some ways. It is a portrait because it is a description of a person, and if that person happens to be Black, we can go back to times where the very definition of a portrait is challenged if it is a depiction of a Black person. Especially in America.

AA: How does your identity manifest itself in your work?

AF: Some of it is about experience, some of it is about the poetics that I feel … sometimes it’s very personal. But I didn’t want to give it away — we give so much away when we talk about identity. You can’t help but make work from where you are in your perspective. I am definitely a Black person and I’m assuming that role, but in order to have access to the work that I’m making, you have to do some work. All of the poses are ambiguous. I’m thinking about Blackness and understanding that there is a visibility to Blackness to where people have to negotiate the humanity of Blackness.

AA: A lot of the titles for your work are ambiguous in nature; can you tell me about your linguistic approach to titling your work as it relates to the concepts you are exploring?

AF: With works such as A Dance and-or things Mother’s Might Do, I’m thinking about a portrait from a literary perspective and within the captions themselves. Instead of having the sitters for this particular portrait, Lanece Carpenter Sr. and Rico Jr., move in a linear factual way, they are depicted truthfully in some ways but then they’re also posed ambiguously. They are almost questioning or providing a list, and the words in the caption suggest that it could be either one of those things. At the same time, it could also be whatever it is that you think because once we break the authority of the portrait or the description, then possibilities open. With the form of the captions, the actual narrative of the photographs (if there is any) is challenged and opened up because I’m increasingly interested in thinking about the imagination of the audience. In this way, you could consider my work as postmodern in a sense. 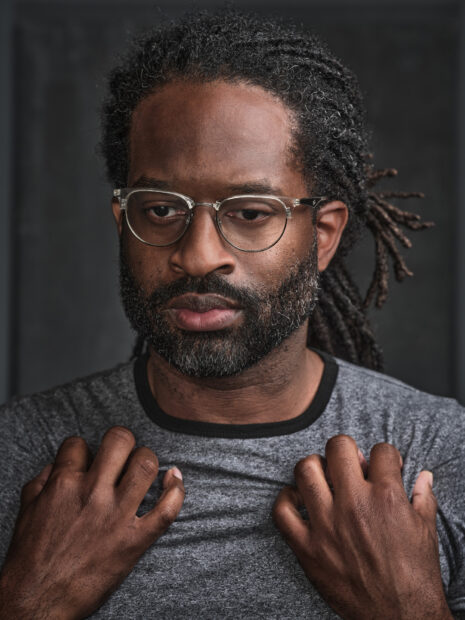 AA: You told me about the increasing role that imagination plays in your work; how are you exploring the function of the frame in your portraiture, especially in the portrait of Kellen that is exhibited in the 2022 Contemporary Art Month Perennial?

AF: My new work has me thinking about the studio and what happens beyond the frame. Since I’ve spent so much time in the studio, I’m thinking increasingly about the studio as a privileged space and theatrical space. The portrait of Kellen, Being Held and or holding the line, is actually a beautiful photograph to talk about what happens outside of the frame because there’s this disembodied and disjointed composition. This image has a lot of lineage in it as well and I thought it was a pretty successful image. I’m increasingly thinking about the frame and how to work with it and compose it. I’m also thinking more drastically in terms of how to begin to widen the space that you can see and, at the same time, widening the space that is outside of the frame. 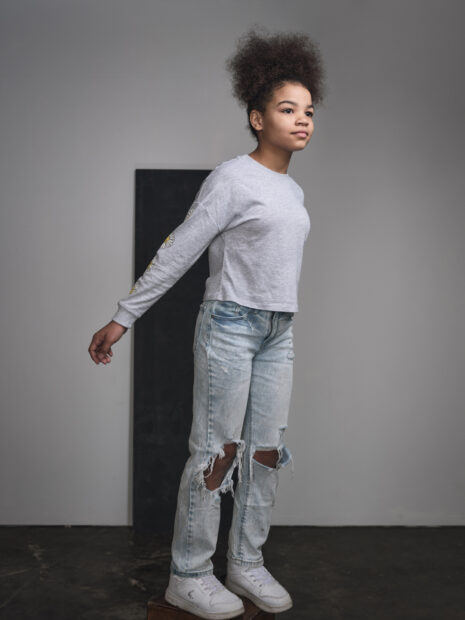 AA: What role does ambiguity play in your work and what do you hope a viewer might take away from your work?

AF: What I’m trying to do with my sitters is to create this tension. There are different narratives that have to do with shared experiences and collective memory that we’re thinking about. I’m always looking for an in between. In between parts, so like the action, the form, the narrative, they all are hinged upon ambiguity. Although I will say I do hope that the audience takes time to think about not just what is happening in the image, but also — if they allow themselves the opportunity to look at my work — I think that they’ll find their way in it. I think there are enough people who have been in my work who are diverse human beings that you should be able to find yourself. I think that to not find yourself in the work is a complete loss, no matter who you are.

Ashley Allen is an artist and writer living and working in San Antonio. She is the recipient of the inaugural Fellowship for Critical Writing for Contemporary Art Month (CAM) San Antonio. This is the second of four texts she will be contributing to Glasstire throughout the month of March 2022.

This is such a generous exchange. I was already a fan of Anthony Francis’ work and really appreciated learning more about his conceptual foundation. Thank you Glasstire for a lovely Sunday morning read.