To read part one of this series, go here.

Visiting El Salvador’s artists meant entering their studios, the museums where their work is shown, and their homes. Here are some highlights: 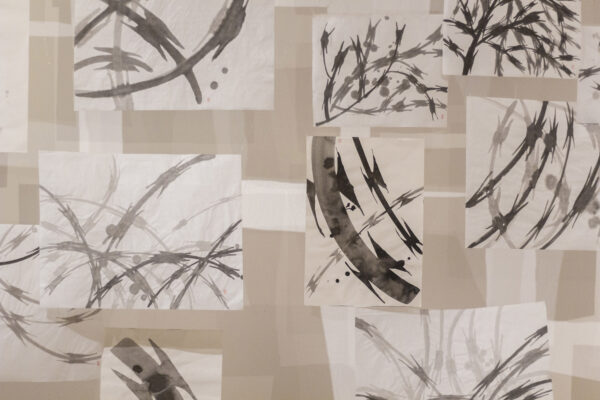 Among the narratives encircling El Salvador, one that stuck out to me was that security has different outcomes. Private contractors place guards to patrol the many public spaces across the country, and their presence can be felt at malls, outside of businesses, and in public squares, like San Salvador’s historic city center. Perhaps what feels different about this, compared to my life in the United States, is merely presentation. The U.S. maintains the highest rank for the nation with the most guns per capita, with 120.5 firearms per 100 people. El Salvador, by comparison, is estimated at less than 3 guns per 100 people. One dynamic to consider in El Salvador is not the sheer volume of security measures implemented, but their visibility to the public.

In Ronald Morán’s Por Encima del Jardín at the Museo de Arte de El Salvador (MARTE), the idea of security, through the imagery of concertina wire (razor wire fencing), has been reconsidered as a metaphor for vines and flowers. 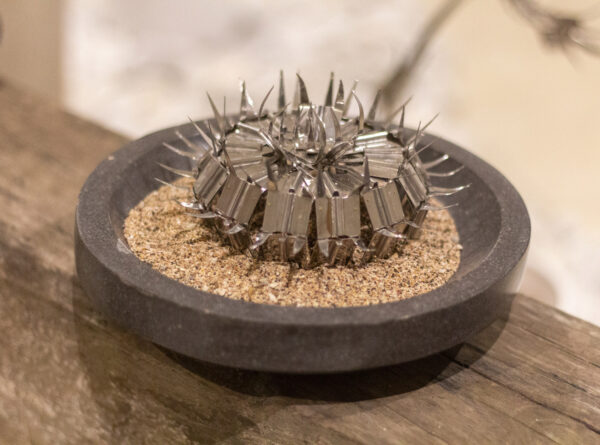 Morán developed a body of sumi-e ink sketches, drawing the form of razor wire in concentric loops with small barbs flanking the line at regular intervals. These sketches were hung as a deconstructed quilt, suspended by clear thread and rustling because of the air conditioning in MARTE’s main galleries. Morán continued exploring the motif by creating graphite drawings of the loose, free-flowing ink sketches he had developed in his studio. His choice to work in the sumi-e style was intended to use one cultural signifier to access another. Morán has also worked with Cristian Escamilla to design and fabricate the real wire, steel blades and all, into actual and imagined floral species. The second gallery in the exhibition is blacked out to make for an installation of concertina arranged on a movable pyramid of steel pickets, alongside a video work. 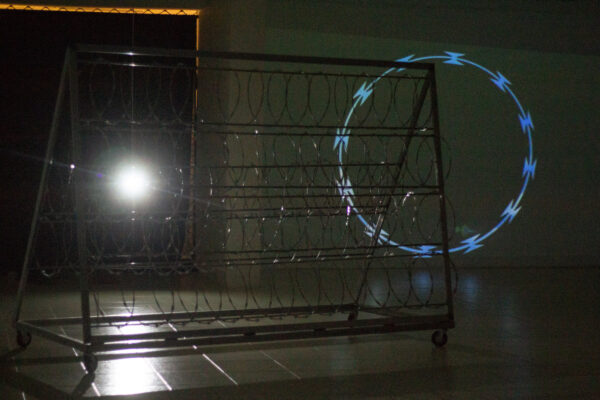 “It is very important to say that all of this was born during quarantine,” said Morán. He noted that the sumi-e drawing style would traditionally be reserved for drawing illustrations of bamboo, the natural flora of Japan. Here, he used that idea to express that the razors have inadvertently become a symbol of Salvadoran life. Morán’s work questions the effects of holding onto hazards closely for protection. Perhaps the ubiquitous presence of security and the impulse for self-preservation has reached an extreme. “Even though we have been normalized to live with insecurity, it’s not healthy,” Morán warned. In the dialogue surrounding the borders that divide up the Americas, this exhibition points to the borders that El Salvador has imposed upon itself. Morán’s examination of fencing as vegetation lends to the reading that we should uproot thorny weeds rather than plant them.

Walking among MARTE’s exhibitions, including galleries with historic Salvadoran paintings and the Dialogues, a temporary exhibition survey of Salvadoran contemporary art, the eras of Central America begin to show themselves. There are still life paintings in Baroque frames, which try to impress. The contemporary work, on view as a part of the Museum’s five-year temporary exhibition cycle, shows the collectives and individual artists of El Salvador working through many themes that are still relevant today. José Nery Alfaro’s miniature painting Untitled is shown alongside a magnifying glass so that viewers can take in all of the detail in his rendition of a bucolic countryside. Dahlia Chévez’s Falsa Franca imitates the style of Salvadoran miniatures, traditionally produced in the rural artisan villages of the country. The work uses scale (both in size of the figurines and their total number) to comment on the labor that international brands rely on El Savador for their textile goods. 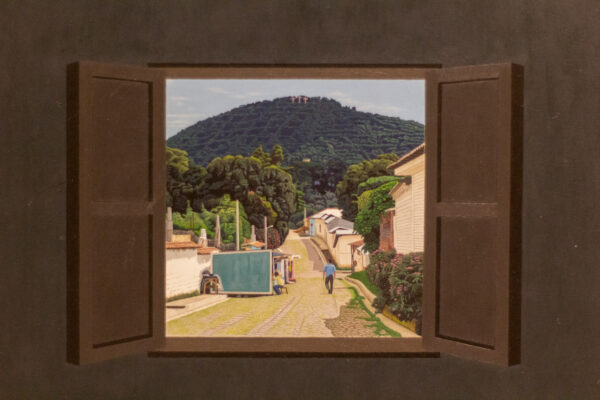 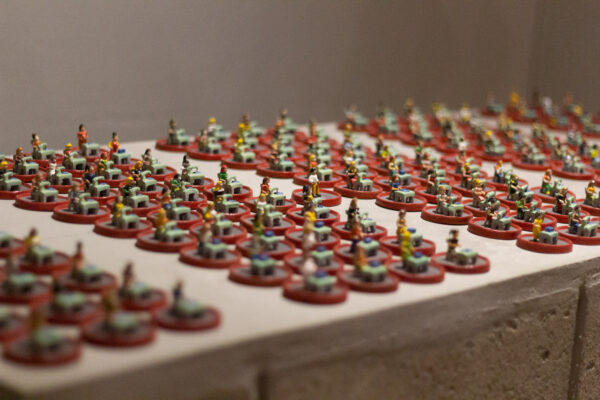 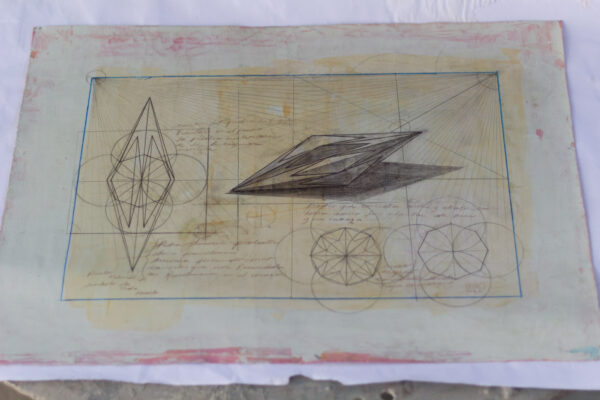 Schematic drawings for a sculpture by Mario Lopez at FAVRIKA

Preceding our trip to MARTE, Natalia Padilla and I met with Morán at his studio within the studios at FAVRIKA collective, in the Loma Linda neighborhood of La Libertad, south of San Salvador. It’s a large compound, a converted battery manufacturing plant segmented into generous studio spaces. This is a “studio” in a very formal sense: painters develop and arrange their work in cubicles, but there’s lots of open space, inside and out, where fabrication and sculptural practices are made possible. While Escamilla, Morán’s fabricator and collaborator, is not a member of the collective formally, he set up a metals workshop on site to execute the flower sculptures seen in Jardín.

Other artists within FAVRIKA include Mario Lopez, a sculptor working in Basalt rock to create small-sized sculptures which reclaim Salvadoran style and technique, and Juan Carlos Recinos, a painter who is developing several bodies of work that are critical on the positions of Salvadoran ethnic identity and political rhetoric by Nayib Bukele’s (El Salvador’s sitting President) administration.

Up to this point, my visit involved talking to people who made exclusively “fine art,” as compared to meeting with individuals working generally in the creative fields (such as design or craft). However, another classification of medium and ideology would appear from time to time: plastic arts. Whereas other markets make a distinction between a studio practice (fine art) and craft (skill-based technique), in El Salvador the distinction seemed to instead be closer to fine art production versus fabrication. And as with the U.S., there are creative workers who are conducting business outside of the fine art market.

Estudio Delirio, a design studio operating out of San Salvador, works in everything from product design to branding on projects and social impact campaigns. Established in 2016, the group is led by co-founders Alejandra Marroquín and Carlos Violante. Over two days, I watched the studio develop projects from their workspace in San Salvador. The two have successfully built a business around offering sophisticated but accessible design services in a country where I was being cautioned that growth was slow. Conversations with the two gave insight to operating a creative studio in Central America:

Carlos Violante on operating a studio in El Salvador:

“When we started Delirium we thought it was really nice for everyone to have a small unique piece at their place. Everything is centered right here in the same materials, ceramic, painting and illustration.” 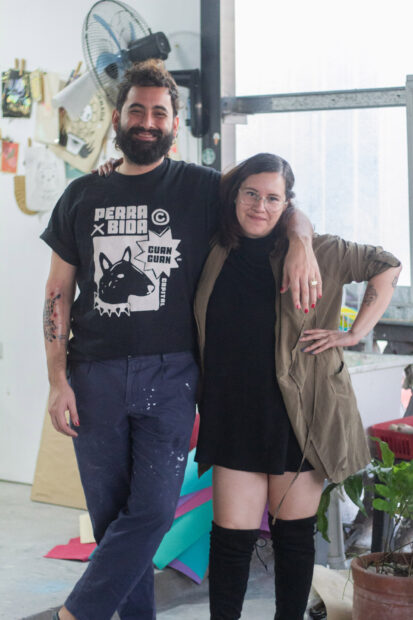 At Simon Vega’s beachfront home studio in El Zonte, Natalia Padilla and I met with the artist to discuss his work exploring themes of space exploration and empire. Vega is represented by Liliana Bloch Gallery in Dallas, and gave a special presentation at the gallery’s booth for the Dallas Art Fair in November of 2021. Padilla and Vega had this exchange during our visit:

Natalia Padilla (NP): What made you interested in exploring these topics? The topic of Space.

Simon Vega (SV): I’ve been using space to talk about colonialism. We will alter whatever paradise for things that we need under western culture. Wherever you might go, you request that the place must have AC, WiFI, and even more important, bottled water. Accessible roads and airports. We’re not willing any more to sweat, to suffer mosquitoes… The age of exploration is done, and now we’re just purely colonizing whatever we want to have it this way. And in the process, ruining it. After we’re done with that, we’ll look for another empty island and trash it and move forward.

NP: We hyper customize it.

SV: For comfort, absolutely. Even other cultures, we arrive to other cultures and say, “We think it should be this way, you guys don’t know.” Or you can come to an island that’s just perfect harmony and kids playing. And someone will come from western society and say, “You’re sitting on a mine of gold.” 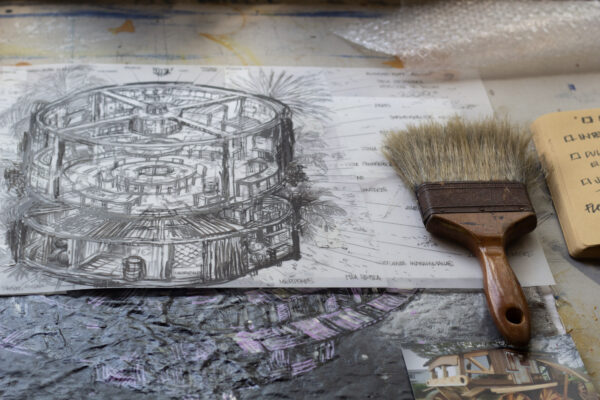 A drawing in Simon Vega’s studio 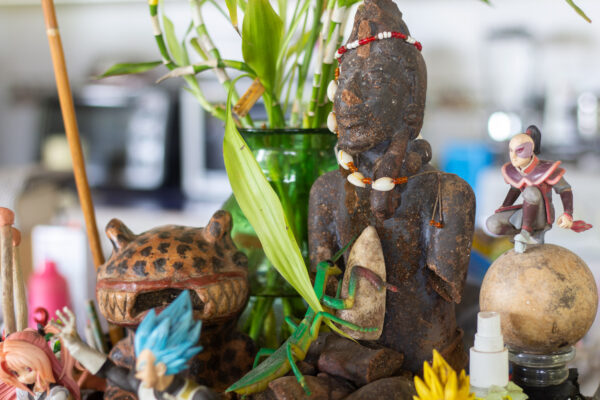 Vega enjoys living on the beach, and wouldn’t have it any other way. When asked what appealed to him so much about this habitat, he responded:

“The whole place is cool because there’s no walls or razors between the houses. Very hard to find in El Salvador. But then again, it’s a gated community.”

Research for this piece was conducted with translation assistance by Natalia Padilla.